END_OF_DOCUMENT_TOKEN_TO_BE_REPLACED

This will be an experience shared by all 3D printer owners; a long print is mostly done, and something goes wrong. Result: most of the print and a heap of plastic vermicelli, or worse still, a print with an obviously offset layer in it.

[Simon Merrett] had a large part running on his printer, and 2.5 hours in to a 3 hour print the nozzle caught the edge of what he had already done, and as a result he was extruding into thin air (He told us in his tip email that his machine build was the likely culprit). Being fortunate enough to see it happening, he was able to hit the stop button in his Repetier software and bring the calamity to a swift halt.

How he rescued the situation is an interesting tale which he’s recorded in the screen capture video we’ve placed below the break, it involved using a spreadsheet to analyse the G-Code and remove the lines for the part he had already printed before inserting a new set of Z-axis dimensions to start the remaining section of print from the bed upwards. A few further fixes, and he was able to print the rest of his part, which he could then glue to the unfinished top of the section he had already printed. He points out in his YouTube description that he emailed the Repetier folks, and they told him a quicker way to deal with the Z-axis: using the G92 command to reset it.

You might ask why if he was prepared to spend this amount of time he didn’t simply reprint the entire part. But he points out, in that event the print could well have failed again at exactly the same point.

END_OF_DOCUMENT_TOKEN_TO_BE_REPLACED 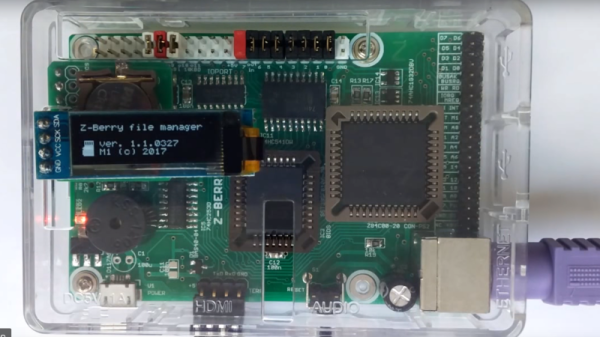 Homebrew computers are the ‘in thing’ these days and the Zilog Z80 is the most popular choice for making one on your own. We have seen some pretty awesome builds but [Martin K]’s Z-berry is the smallest on record yet. As the name suggests, the retrocomputer conforms to the Raspberry Pi form factor which includes the GPIO header.

The Z-berry is designed with a Z80 CPU running at 10 MHz (20 MHz possible) and comes with 32 kB ROM
and 512 kB RAM. In addition to the serial interface, the computer boasts an I2C bus, an SPI bus, and a PS/2 keyboard connector to boot. [Martin K] has a video where the finished system is enclosed in a Raspberry Pi case and has an I2C OLED display attached and working.

[Martin K] has posted a lot of details on how to make your own Z-berry which includes the BOM, schematic and preliminary information. We reached out to him to find out more about the software which is stable and available on request along with PCBs and sample code. Additionally, this project promises to draw much less current than the Raspberry Pi and should prove useful for anyone looking to create a retro solution to a modern problem.

It is interesting to see projects that combine modern techniques with retro technologies. One of the best Z80 projects we have seen is the FAP80 and there are some awesome homebrew computer projects on Hackaday.io for you to take a look and get inspiration.
END_OF_DOCUMENT_TOKEN_TO_BE_REPLACED 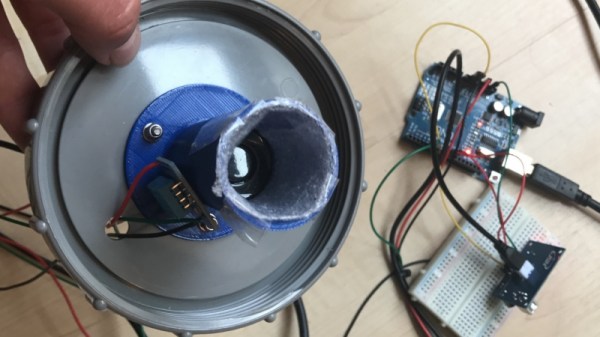 All over the world, in particular in underdeveloped countries, people die every year by the thousands because of floods. The sudden rise of water levels often come unannounced and people have no time to react before they are caught in a bad spot. Modern countries commonly have measure equipment deployed around problematic areas but they are usually expensive for third world countries to afford.

[Benne] project devises a low-cost, cloud-connected, water level measuring station to allow remote and central water level monitoring for local authorities. He hopes that by being able to monitor water levels in a more precise and timely fashion, authorities can act sooner to warn potentially affected areas and increase the chance of saving lives in case of a natural disaster.

At the moment, the project is still in an early stage as they are testing with different sensors to figure out which would work best in different scenarios. Latest version consists essentially in an Arduino UNO, an ultrasonic distance sensor, and a DHT temperature/humidity sensor to provide calibration since these characteristics affect the speed of sound. Some years ago, we covered a simple water level monitoring using a Parallax Ping sensor, but back then the IoT and the ‘cloud’ weren’t nearly as fashionable. They also tested with infrared sensors and a rotary encoder.

They made a video of the rotary encoder, which we can see below:

END_OF_DOCUMENT_TOKEN_TO_BE_REPLACED

We’ve seen the 3D phone fad come and go, with devices like the Evo 3D, that used a parallax barrier to achieve autostereoscopy (that is, 3D viewing without glasses). These displays aren’t holograms, they are just showing your eyes two different images like a 3D movie or a stereopticon. However, researchers from Australia and China are hoping to change that. They’ve developed a nano-hologram (their term) that is about 1000 times thinner than a human hair. You can see a video about the invention, below.

Conventional holograms modulate the phase of light to give the illusion of three-dimensional depth. But to generate the required phase shifts, those holograms need to be as thick as the optical wavelengths involved. The researchers claim the holograms are “simple” to make, but that depends on what you compare it to. You need some exotic materials, vacuum deposition gear, and a laser that can do femtosecond-long pulses.

The research team has broken this thickness limit with a 25 nanometer hologram. Their technique relies on a topological insulator material a novel quantum material that holds a low refractive index in the surface layer but a much higher refractive index in the bulk of the material. This forms an intrinsic optical resonant cavity which can enhance the phase shifts and makes holography possible.

The next step is to develop a rigid thin film to overlay an LCD screen. The current version has pixels at least ten times too large to be practical for that application, so that’s another hurdle to overcome.

We’ve seen screens that shoot 3D images on movies like Star Wars for years. This isn’t it yet, but it is the next step. Imagine a phone, a wrist watch, or a contact lens that could generate a holographic image. Or a garbage-can-sized robot.

END_OF_DOCUMENT_TOKEN_TO_BE_REPLACED

A big problem with restoring old arcade or pinball machines is finding original parts to get them running again. That’s part of the fun, though; when something finally works after weeks or months of effort. On the other hand, sometimes the only hope for old parts that will never be in a pinball machine again is for [Randy] to come across them. One of those parts he had lying around was a backglass for an old machine, and decided to turn it into a unique word clock.

The original pinball machine was built in 1956, and despite its age the backglass had almost no signs of wear or damage. There are 43 lights on this particular machine which is more than enough for 12 hours, minutes (by the 10s), seconds, and a few extras. An ATtiny85 serves as the controller and drives a fleet of Neopixels hidden in the display. There are also three buttons which control the brightness and allow the time to be set.

Be sure to check out the video below of this one-of-a-kind clock in action. A lot more went into this build as well including framing the glass, giving it a coat of paint and polish, and programming the clock into the microcontroller. Old backglasses from pinball machines seem to be relatively popular to repurpose into more conventional clocks, too, even clocks of an atomic nature.

END_OF_DOCUMENT_TOKEN_TO_BE_REPLACED

Fluorescence microscopy is an optical technique that incorporates fluorescence or phosphorescence (as opposed to reflection and absorption) in order to study the properties of organic and inorganic substances. Not a stranger to bringing DIY techniques into the lab, [Philip] is using 3D printing resources to advance science and delight interns from labs everywhere.

In fluorescence microscopy, a huge limiting factor that decreases the amount of data that can be gleaned from a single sample is the number of targets that can be labeled with fluorescent tags. However, overlap in the spectral emissions of fluorophores limits the fluorophores that can be used side-by-side. This means that only around four targets can be labeled with fluorescent tags in a typical setup, with ten being the absolute maximum if careful spectral demixing is done. However, in a single sample, there might be a few hundred components. Clearly, we’re off by an order of magnitude (or more).

However, researchers are smart. One current solution is to label targets in a sequential manner with probe signal nullification steps in between. Ideally, probes are introduced in sequential without moving the sample off of the microscope. After imaging, the probes can be removed, allowing the number of labeled targets to be limited only to the number of rounds of probe replacement. And, with clever ‘barcoding’ schemes, the returns from each round can even scale exponentially, rather than linearly.

But, to accomplish this feat, a single sample must be processed through the labeling and stripping steps repeatedly. It’s not uncommon to do this by hand, consisting of many hours of exceptionally tedious work. That’s where [Philip] comes in. By using a 3D printer like Cartesian robot, [Philip] is automating the labeling and stripping steps resulting in happy interns and ultimately a more precise product. Rather than spending a few tens of thousands on a commercial machine, you can find all of [Philip’s] design files in his GitHub repo and make one for ~ $1k. Ready for more? We’ve got your back.