Most time-lapse videos of 3D prints show a steadily growing print with a crazy blur of machine movement everywhere else. This is because an image is captured at a regular time interval, regardless of what’s physically going on with the machine. But what if images were captured at consistent machine positions instead? [FormerLurker]’s Octolapse plugin for OctoPrint came out of beta recently and does exactly that, and the results are striking. Because OctoPrint knows where a 3D printer’s print head is at all times, it’s possible for a plugin to use this information to create time-lapse videos where the print head position is consistent instead of a crazy blur, or even have the print head absent from the shot altogether.

[FormerLurker] had originally created stabilized time lapses by hand editing G-code, which had great results but was inefficient and time-consuming. This plugin is the result of his work at automating and enhancing the process, and is also his first serious open source programming project. We’ve covered upgrading a 3D printer with OctoPrint before, and the plugins functionality of OctoPrint means features can be added independently from the core system, which itself largely remains a one-woman effort by creator and maintainer [Gina Häußge].

Morse code — that series of dots and dashes — can be useful in the strangest situations. As a kid I remember an original Star Trek episode where an injured [Christopher Pike] could only blink a light once for yes and twice for no. Even as a kid, I remember thinking, “Too bad they didn’t think to teach him Morse code.” Of course odd uses of Morse aren’t just for TV and Movies. Perhaps the strangest real-life use was the case of the Colombian government hiding code in pop music to send messages to hostages.

In 2010, [Jose Espejo] was close to retirement from the Colombian army. But he was bothered by the fact that some of his comrades were hostages of FARC (the Revolutionary Armed Forces of Colombia; the anti-government guerrillas), some for as many as ten years. There was a massive effort to free hostages underway, and they wanted them to know both to boost morale and so they’d be ready to escape. But how do you send a message to people in captivity without alerting their captors?

END_OF_DOCUMENT_TOKEN_TO_BE_REPLACED

While Apple products have their upsides, the major downside with them is their closed environment. Most of the products are difficult to upgrade, to say the least, and this is especially true with the iPhone. While some Android devices still have removable storage and replaceable batteries, this has never been an option for any of Apple’s phones. But that doesn’t mean that upgrading the memory inside the phone is completely impossible.

[Scotty] from [Strange Parts] is no stranger to the iPhone, and had heard that there are some shops that can remove the storage chip in the iPhone and replace it with a larger one so he set out on a journey to try this himself. The first step was to program the new chip, since they must have software on them before they’re put in the phone. The chip programmer ironically doesn’t have support for Mac, so [Scotty] had to go to the store to buy a Windows computer first before he could get the chip programmer working right.

After that hurdle, [Scotty] found a bunch of old logic boards from iPhones to perfect his desoldering and resoldering skills. Since this isn’t through-hole technology a lot of practice was needed to desolder the chip from the logic board without damaging any of the other components, then re-ball the solder on the logic board, and then re-soldering the new larger storage chip to the logic board. After some hiccups and a lot of time practicing, [Scotty] finally had an iPhone that he upgraded from 16 GB to 128 GB.

[Scotty] knows his way around the iPhone and has some other videos about other modifications he’s made to his personal phone. His videos are very informative, in-depth, and professionally done so they’re worth a watch even if you don’t plan on trying this upgrade yourself. Not all upgrades to Apple products are difficult and expensive, though. There is one that costs only a dollar.

We sat down with him after his talk at the Hackaday Superconference last November, and we have to say that he made us think more than twice about tackling the tiny computer that lies hidden inside a cell phone. Check out his talk if you haven’t yet.

END_OF_DOCUMENT_TOKEN_TO_BE_REPLACED 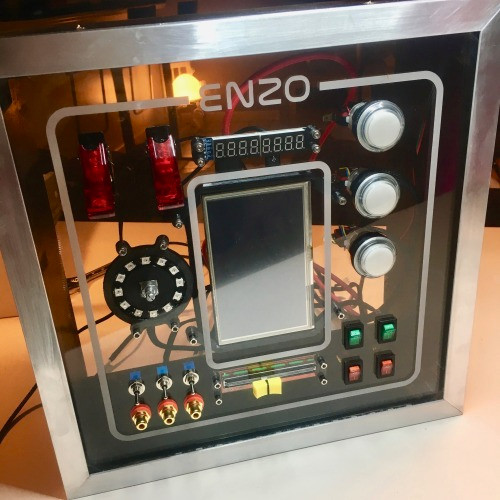