Not long ago, we published an article about researchers adding sensor data to passive RFID tags, and a comment from a reader turned our heads to a consumer/maker version which anyone can start using right away (PDF). If you’re catching up, passive RFID technology is behind the key fobs and stickers which don’t need power, just proximity to the reader’s antenna. This is a much “hackier” version that works with discrete signals instead of analog ones. It will not however require writing a new library and programming new tags from the ground up just for the user to get started, so there is that trade-off. Sparkfun offers a UHF reader which can simultaneously monitor 25 of the UHF tags shown in this paper.

To construct one of these enhanced tags, the antenna trace is broken and then routed through a switching device such as a glass-break sensor, temperature limit switch, doorbell, or light sensor. Whenever continuity is restored the tag will happily send back its pre-programmed data, and the reader will acknowledge that somewhere one of the tags is seeing some activity. Nothing says this could not be applied to inexpensive RFID readers should you just want a temperature warning for your gecko terrarium or light sensor to your greenhouse‘s sealed controller.

Thank you, [Mike Massen], for your tip on RFID Doing More Than ID.

END_OF_DOCUMENT_TOKEN_TO_BE_REPLACED

[Eric] covers the whole process from start to finish. In the beginning, a wide variety of concepts are drawn up and explored on paper. Various ideas are evaluated against each other and whittled down to a small handful. Then, cardboard models are created and the concepts further refined. This continues through several further phases until it gets down to the fun part of choosing colours and materials for the final product.

Watching the effects of cost and manufacturing process shape the finished item is instructive as to how the design process works in the real world. The toilet paper holder itself is an interesting unit, too – using adjustable magnetic detents to enable one-handed use, as well as including a cell phone holder.

We’ve seen [Eric]’s work before – such as his primer on the value of cardboard in design. Video after the break.

END_OF_DOCUMENT_TOKEN_TO_BE_REPLACED

There’s no single formula for success, but if we’ve learned anything over the years of covering cons, contests, and hackathons, it’s that, just like in geology, pressure can create diamonds. Give yourself an impossible deadline with high stakes, and chances are good that something interesting will result. That’s what Estefannie from the YouTube channel “Estefannie Explains It All” did when Bay Area Maker Faire was rolling around last year, and she stopped by the 2018 Hackaday Superconference to talk about the interactive Daft Punk helmet that came out of it.

It’s a rapid-fire tour of Estefannie’s remarkably polished replica of the helmet worn by Guy-Manuel de Homem-Christo, one half of the French electronic music duo Daft Punk. Her quick talk, video of which is below, gives an overview of its features, but we miss the interesting backstory. For that, the second video serves as a kickoff to a whirlwind month of hacking that literally started from nothing.

You’ll Learn it Along the Way

Before deciding to make the helmet, Estefannie had zero experience in the usual tools of the trade. With only 28 days to complete everything, she had to: convert her living room into a workshop; learn how to 3D print; print 58 separate helmet parts, including a mold for thermoforming the visor; teach herself how to thermoform after building the tools to do so; assemble and finish all the parts; and finally, install the electronics that are the hallmark of Daft Punk’s headgear. 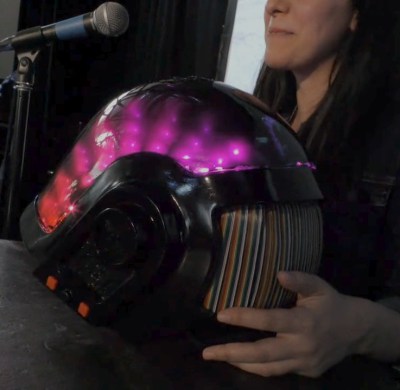 The three videos in her series are worth watching to see what she put herself through. Estefannie’s learning curve was considerable, and there were times when nothing seemed to work. The thermoforming was particularly troublesome — first too much heat, then not enough, then not enough vacuum (pretty common hurdles from other thermoforming projects we’ve seen). But the finished visor was nearly perfect, even if it took two attempts to tint.

We have to say that at first, some of her wounds seemed self-inflicted, especially seeing the amount of work she put into the helmet’s finish. But she wanted it to be perfect, and the extra care in filling, sanding, priming, and painting the printed parts really paid off in the end. It was down to the wire when BAMF rolled around, with last minute assembly left to the morning of the Faire in the hotel room, but that always seems to be the way with these kinds of projects.

In the end, the helmet came out great, and we’re glad the run-up to the Superconference wasn’t nearly as stressful for Estefannie — or so we assume. And now that she has all these great new skills and tools, we’re looking forward to her next build.

END_OF_DOCUMENT_TOKEN_TO_BE_REPLACED

For many people, Gmail is synonymous with e-mail. Some people like having cloud access to everything and some people hate having any personal data in the cloud. However you feel about it, one thing that was nice about having desktop software is that you could hack it relatively easily. If you didn’t like how your desktop mail client worked, you had a lot of options: use a different program, write your own, hack the executable of your current program, or in the case of open source just fork it and make any changes you are smart enough to make.

Google provides a lot of features with all of its products, but however you slice it, all the code runs on their servers out of your reach. Sort of. If you know JavaScript, you can use Google Apps Script to add features to many Google products including Gmail. If you’ve used Office scripting, the idea is the same, although obviously the implementation is very different.

With scripting you can make sophisticated filters that would be very hard to do otherwise. For example,  monitor for suspicious messages like those with more than 4 attachments, or that appear to come from a contact between the hours of 2AM and 5AM.

For our example today, I’m going to show you something that is easy but also highly useful.

END_OF_DOCUMENT_TOKEN_TO_BE_REPLACED

…theoretically, anyway. When [Quinn] lucked into a bunch of 5 mm red LEDs and a tube of 74LS164 shift registers, a project sprang to mind: “The Forever Number,” a pseudo-random number generator with a period longer than the age of the universe. Of course, the components used will fail long before the sequence repeats, but who cares, this thing looks awesome!

The core of the project is a 242-bit linear-feedback shift register (LFSR) constructed from (31) 74LS164’s. An XOR gate and inverter computes the next bit of the sequence by XNOR’ing two feedback bits taken from taps on the register, and this bit is then fed into bit zero. Depending on which feedback taps are chosen, the output sequence will repeat after some number of clock cycles, with special sets of feedback taps giving maximal lengths of 2N – 1, where N is the register length. We’ll just note here that 2242 is a BIG number.

The output of the LFSR is displayed on a 22×11 array of LEDs, with the resulting patterns reminiscent of retro supercomputers both real and fictional, such as the WOPR from the movie “War Games,” or the CM2 from Thinking Machines.

The clock for this massive shift register comes from – wait for it – a 555 timer. A potentiometer allows adjustment of the clock frequency from 0.5 to 20 Hz, and some extra gates from the XOR and inverter ICs serve as clock distribution buffers.

We especially love the construction on this one. Each connection is meticulously wire-wrapped point-to-point on the back of the board, a relic originally intended for an Intel SBC 80/10 system. This type of board comes with integrated DIP sockets on the front and wire-wrap pins on the back, making connections very convenient. That’s right, not a drop of solder was used on the board.