It’s easy to take power supplies for granted in modern computing, but powering vintage hardware is not always so simple or worry-free. The power supplies for old electronics are themselves vintage, and the hardware being powered can be quite precious. A power problem can easily cause fried components and burned traces on a board. As [Doc TB] observes, by the time you hear crackling, it’s already far too late. 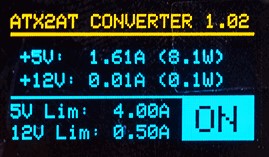 To address this, [Doc TB] designed the ATX2AT Smart Converter as an open source project and recently decided to make it available through a Kickstarter campaign. ATX2AT is a way to safely and securely replace some vintage power supplies with a standard PC ATX power supply, and adds a large number of protection features such as current monitoring and programmable reaction time for overcurrent protection. All of this can help prevent a retrocomputer enthusiast’s precious vintage hardware from being damaged in the event of a problem. It’s not just for powering known-good hardware; it can be invaluable when testing or repairing hardware that might be in an unknown state.

When we first came across [Doc TB]’s ATX2AT project we recognized it as a well-made device to address a specific niche, and to do it well. Assessing risk takes into account not only the probability of a problem occurring, but also just how bad things would be if it did happen. If your old hardware is precious enough to warrant the extra protection, or you are into repairing or assessing old hardware, then an ATX2AT might be just what you need. You can see it in action in the video embedded below.

END_OF_DOCUMENT_TOKEN_TO_BE_REPLACED

Join us on Wednesday, August 7th at noon Pacific for the Kickstarter Hack Chat with Beau Ambur and Clarissa Redwine!

For many of us, magic things happen on our benches. We mix a little of this, one of those, and a couple of the other things, and suddenly the world has the Next Big Thing. Or does it? Will it ever see the light of day? Will you ever build a community around your project so that the magic can escape the shop and survive the harsh light of the marketplace? And perhaps most importantly, will you be able to afford to bring your project to market?

Crowdfunding is often the answer to these questions and more, and Kickstarter is one of the places where hackers can turn their project into a product. Beau and Clarissa, both outreach leads for the crowdfunding company, will stop by the Hack Chat to answer all your questions about getting your project off the bench and into the marketplace. Join us as we discuss everything from building a community that’s passionate enough about your idea to fund it, to the right way to share your design story.

Our Hack Chats are live community events in the Hackaday.io Hack Chat group messaging. This week we’ll be sitting down on Wednesday, August 7 at 12:00 PM Pacific time. If time zones have got you down, we have a handy time zone converter.

If you’re near San Francisco this weekend, this is what you should be doing. It’s The 6th Annual Hackaday x Tindie MFBA Meetup w/ Kickstarter.

Come hang out with the hardware hackers and bring along a project of your own to get the conversation going. We’re excited to move to a new, larger venue this year. All the good of the past five years will come along with us, plus many benefits of exclusively booking out an entire venue. You can catch up with people who have been on their feet all day running booths — and usually see the stuff they can’t show you at the Faire. The crew from Hackaday, Tindie, and Kickstarter will be on hand. And you’ll get a glimpse of a lot of the cool people and projects you’ve admired on the pages of Hackaday over the years. It’s fun, you should go!

First beer is on us if you RSVP using the link at the top of this article. But we’re mainly publishing this today to show off the poster art. Deposit your adoration for this exquisite illustration in the comments below.

We love all of the original art that Joe Kim creates for Hackaday articles. It’s impossible to look at his poster for this event and be anything but overjoyed. Here’s a link to the full size image, but be warned that the file is 14.4 MB 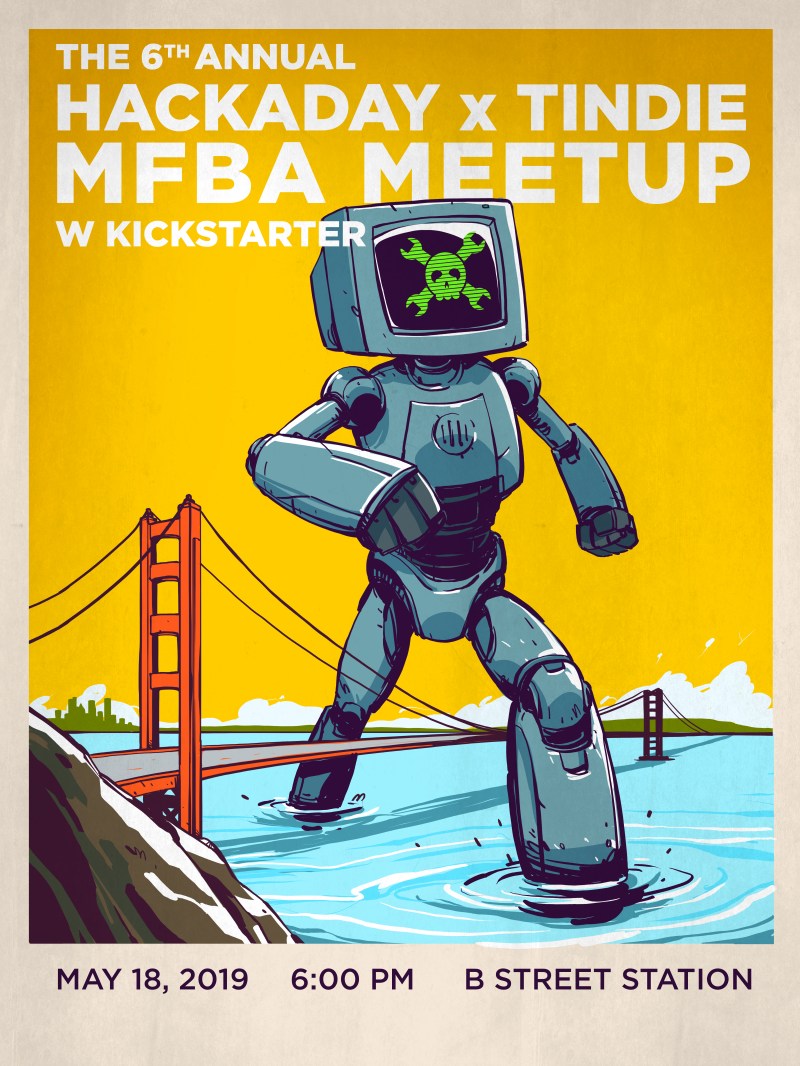 Kickstarter and its ilk seem like the Wild West when it comes to claims of being “The world’s most (Insert feature here) device!” It does add something special when you can truly say you have the world record for a device though, and [MellBell Electronics] are currently running a Kickstarter claiming the worlds smallest Arduino compatible board called Pico.

We don’t want to knock them too much, they seem like a legit Kickstarter campaign who have at time of writing doubled their goal, but after watching their promo video, checking out their Kickstarter, and around a couple of minutes research, their claim of being the world’s smallest Arduino-compatible board seems to have been debunked. The Pico measures in at an impressive 0.6 in. x 0.6 in. with a total area of 0.36 sq.in. which is nothing to be sniffed at, but the Nanite 85 which we wrote up back in 2014 measures up at around 0.4 in. x  0.7in. with a total area of around 0.28 sq.in.. In this post-fact, fake news world we live in, does it really matter? Are we splitting hairs? Or are the Pico team a little fast and loose with facts and the truth?

There may be smaller Arduino compatible boards out there, and this is just a case study between these two. We think when it comes to making bold claims like “worlds smallest” or something similar perhaps performing a simple Google search just to be sure may be an idea.

END_OF_DOCUMENT_TOKEN_TO_BE_REPLACED

Is the Wanhao Duplicator the best printer on the market? Not at all. Is it a contender for best low-price printer?Definitely. If you consider it a low priced kit printer instead of a finished product then it’s possible that, in its price class, it is hands down the best out there.

For somewhere between 300 and 500 dollars, the Duplicator is a hell of a printer. Also selling under the name Cocoon and Maker Select, the printer is a thin folded sheet steel frame clone of the Prusa i3. I opened the box expecting the most flagrant cost cutting I could imagine. I figured the steel would be paper thin. The holes wouldn’t line up. I expected the connections to be improperly terminated. I expected a fire.

What I got was up and printing in under an hour. What I got was something designed by someone who cares, but with an obvious cost goal. As a bonus, it even printed pretty well. As mentioned, the basic shape of the frame is that of a Prusa i3. A horizontal bit holds the bed and y movement. A vertical bit is attached to the middle of that, making a T. It holds the X, Z, and nozzle.

END_OF_DOCUMENT_TOKEN_TO_BE_REPLACED

M3D just launched their second 3D printer on Kickstarter. The M3D Pro offers more professional features than its predecessor, the M3D Micro, which is still one of cheapest 3D printers around. Despite the higher price of $499, the campaign reached its $100,000 funding goal within hours.