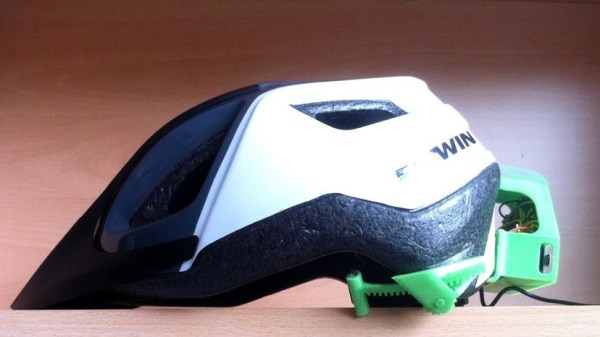 [Matlek] had an interesting problem. On one hand, a 40 minute bike commute without music is a dull event but in France it is illegal for any driver to wear headphones. What to do? Wanting neither to break the law nor accept the risk of blocking out surrounding sounds by wearing headphones anyway, and unwilling to create noise pollution for others with a speaker system, [Matlek] decided to improvise a custom attachment for a bike helmet that plays audio via bone conduction. We’ll admit that our first thought was a worrisome idea of sandwiching metal surface transducers between a helmet and one’s skull (and being one crash away from the helmet embedding said transducers…) but happily [Matlek]’s creation is nothing of the sort.

The bone conduction is cleverly achieved by driving small DC motors with an audio signal through a TPA2012 based audio amplifier, which is powered by a single 18650 cell. By using motors in place of speakers, and using a 3D printed enclosure to hold the motors up to a sweet spot just behind the ears, it’s possible to play music that only the wearer can hear and does not block environmental sounds.

[Matlek] didn’t just throw this together, either. This design was the result of researching bone conduction audio, gathering a variety of different components to use as transducers, testing which performed best, and testing different locations on the body. Just behind the ear was the sweet spot, with the bony area having good accessibility to a helmet-mounted solution. Amusingly, due to the contact between the motors and the rest of the hardware, the helmet itself acts as a large (but weak) speaker and faint music is audible from close range. [Matlek] plans to isolate the motors from the rest of the assembly to prevent this.

Another good way to get audio to transmit via bone conduction? Send it through the teeth. While maybe not the best option for a bike rider, biting down on this metal rod sends audio straight to your inner ear. 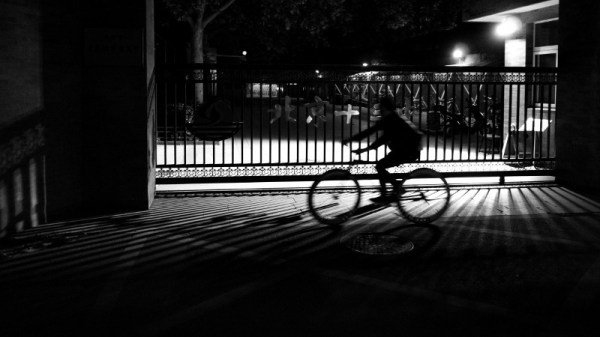 Bikes are a great way to get around and get exercise at the same time, and are widely popular with human children due to the fact that they’re generally not allowed to drive. However, riding on or next to the road can be dangerous, particularly at night, when even adults on bikes are hard to see. It’s far worse for the youngest children, who can be incredibly small and difficult to spot. [Patrick]’s children enjoy riding, but it can get a little sketchy at night, so he developed a solution.

The project relies on cheap, commonly available LED strip lights. Rather than any fancy addressable strips, these are just simple strings of LEDs with current limiting resistors already fitted in a convenient, adhesive backed format. This makes the job as easy as peeling off the backing tape, sticking the strips to the helmet, and providing a power source. In clsasic entry-level hack style, everything’s running off a single 9V battery. Is it as versatile as a rechargable lithium pack with integrated controller? No, but it’s a swift way to get a project off the ground.

The trick here isn’t so much the hardware side of things – there’s nothing fancy about a battery and some LEDs. The key here is that [Patrick] identified that his children are small and difficult to see, thus it made sense to fit helmet lights rather then more typical bike lights to make them more visible to surrounding traffic.

For something at the other end of the spectrum, check out this amazingly professional LED bike light.