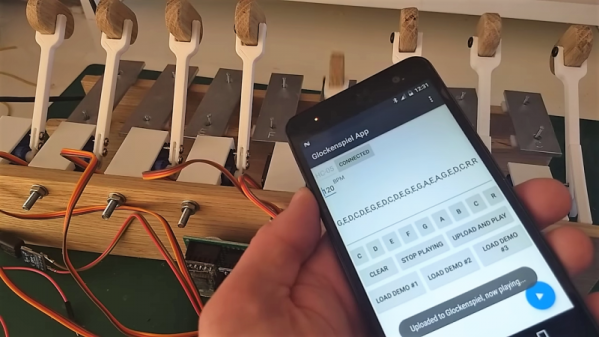 If there’s a happier word ever imported into the English language than “Glockenspiel”, we’re not sure what it is. And controlling said instrument with a bunch of servos and an Arduino makes us just as happy.

When [Leon van den Beukel] found a toy glockenspiel in a thrift store, he knew what had to be done – Arduinofy it. His first attempt was a single hammer on a pair of gimballed servos, which worked except for the poor sound quality coming from the well-loved toy. The fact that only one note at a time was possible was probably the inspiration for version two, which saw the tone bars removed from the original base, cleaned of their somewhat garish paint, and affixed to a new soundboard. The improved instrument was then outfitted with eight servos, one for each note, each with a 3D-printed arm and wooden mallet. An Arduino runs the servos, and an Android app controls the instrument via Bluetooth, because who doesn’t want to control an electronic glockenspiel with a smartphone app? The video below shows that it works pretty well, even if a few notes need some adjustment. And we don’t even find the servo noise that distracting.

True, we’ve featured somewhat more accomplished robotic glockenspielists before, but this build’s simplicity has a charm of its own.

END_OF_DOCUMENT_TOKEN_TO_BE_REPLACED

Learning to play guitar can involve a lot of memorization – chords, scales, arpeggios, you name it. [MushfiqM] has made the process a bit easier with his Digital Chord Chart. Just about every beginning guitarist keeps a chord app, chord book, or even a chord poster handy. Usually these chord charts are in the form of tablature, which is a shorthand method of showing where each finger should go on the instrument. [MushfiqM] took things a step further by actually placing that chart on a 3D printed model of a guitar fretboard.

[MushfiqM] started by rendering a 3D model of an abbreviated guitar using Autodesk Inventor. He then printed his creation in 3 parts: headstock, neck, and fretboard. The neck of the guitar was hollowed out to allow room for a matrix of LEDs which would show the finger positions. [MushfiqM] then painstakingly soldered in a charlieplexed matrix of 30 leds, all connected by magnet wire. The LEDs are controlled by an Arduino UNO, which has the chord and scale charts stored in flash.

For a user interface, [MushfiqM] used a 2×16 character based LCD and a low-cost IR remote control. All the user has to do is select a chord or scale, and it’s displayed on the fretboard.

There are a couple of commercial products out there which perform a similar function, most notably the Fretlight guitar. Those can get a bit pricy though – costing up to $400.00 USD for an LED enabled guitar.