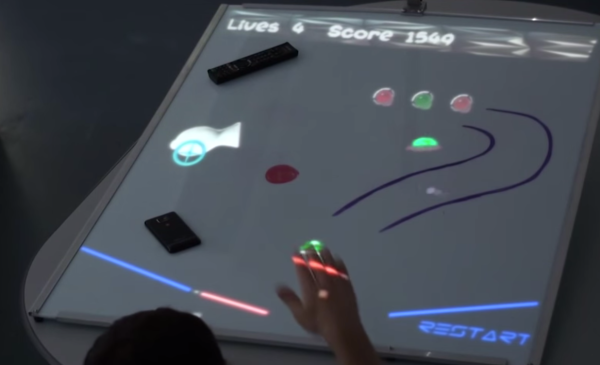 Pinball machines are fascinating pieces of mechanical and electrical engineering, and now [Yair Moshe] and his students at the Israel Institute of Technology has taken the classic game one step further.  Using computer vision and a projector, this group of engineers has created an augmented reality pinball game that takes pinball to a whole new level.

Once the laptop, webcam, and projector are set up, a course is drawn on a whiteboard which the computer “sees” to determine the rules of the game. Any course you can imagine can be drawn on the whiteboard too, with an interesting set of rules that no regular pinball game could take advantage of. Most notably, the ball can change size when it hits certain types of objects, which makes for a very interesting and unconventional style of play.

The player uses their hands to control the flippers as well, but not with buttons. The computer watches the position of the player’s hands and flips the flippers when it sees a hand in the right position. [Yair] and his students recently showed this project off at DLD Tel Aviv and even got [Shimon Perez], former President of Israel, to play some pinball at the conference! END_OF_DOCUMENT_TOKEN_TO_BE_REPLACED

Hot off the heels of his web server for the TI MSP430, [Rob] shared a MIDI booster pack for the MSP430 LaunchPad, an exceedingly inexpensive and ever more capable microcontroller that is getting somewhat of a cult following.

[Rob]’s MIDI booster pack contains a MIDI in and out port as well as just about whatever MIDI manipulation apps his mind can dream up. So far, [Rob] has a MIDI arpeggiator, a harmonizer, an echo, filter, s MIDI monitor that displays incoming messages on a Nokia LCD, and a controller that interfaces with a light sensor or joystick to manipulate MIDI variables.

Back in the 80s (and 90s, and even into the aughts), a dedicated MIDI arp or harmonizer was a crazy expensive piece of kit, especially considering how simple the device is. Those dedicated rackmount boxes can now be replaced with a TI LaunchPad and [Rob]’s booster pack.

You can check out the arp and harmonizer in action after the break.