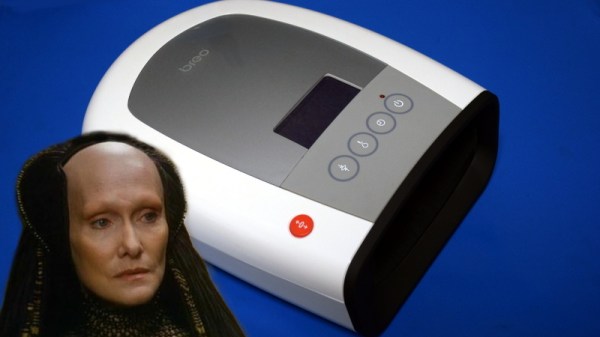 I immediately felt uncomfortable when I realized this thing is called the “Breo iPalm520 Acupressure Hand Massager”. You’re supposed to stick your hand into it, and through unknown machinations it performs some kind of pressure massage complete with heating action. It’s like one of those pain boxes from Dune. It’s all the more disturbing when you realize the red button on the thing is an emergency release. That’s right, once your hand is in this contraption you can’t take it out until the thing has had its way with you or you tap out.

At least once a week I try to get to the local thrift store to look for interesting things. I’d like to be more specific than “interesting things”, but truth be told, I never really know what I’m looking for until I see it. Sure there’s the normal consumer electronics kind of stuff, but I’ve also found some very nice laboratory equipment, computer parts, software, technical books, etc. You just have to go regularly and keep an eye out for the occasional needle amongst the hay.

I want you to know, Dear Readers, that I did briefly summon the courage to put my hand into this thing and turn it on. Now I am not what one might call an overly brave man, and perhaps that might explain my personal experience. But when it started to hum and heat up, constricting around my hand to the point I couldn’t move my fingers, I screamed like a child and mashed the emergency button as if I was a pilot trying to eject from a mortally wounded aircraft. As far as Frank Herbert is concerned, I’m no human at all.

In an effort to better understand this torture device, lets open it up and see what lurks beneath that futuristic exterior.

END_OF_DOCUMENT_TOKEN_TO_BE_REPLACED

Winter is coming, along with mittens, cold hands, snow, and jackets. Now that we’re all carrying around lithium batteries in our pocket, wouldn’t it be a great idea to build an electronic hand warmer? That’s what [GreatScott!] thought. To build his electronic hand warmer, he turned to the most effective and efficient way to turn electricity into heat: a ten-year-old AMD CPU.

Building an electronic hand warmer is exceptionally simple. All you need is a resistive heating element (like a resistor), a means to limit current (like a resistor), and a power supply (like a USB power bank). Connect these things together and you have a hand warmer that is either zero percent or one hundred percent efficient. We haven’t figured that last part out yet.

Because more power and more retro is more betterer, [GreatScott] pulled an AMD Sempron out of an old computer. Finding and reading data sheets is for wimps, apparently, so [GreatScott] just poked some pins with a variable power supply until the CPU was drawing about 500mA at 5V.

The video continues with some Arduino-based temperature measurement, finding some new pins to plug the power leads into, and securing all the wires on this heating element with hot glue. For anyone in the comments ready to say, ‘not a hack’, we assure you, this qualifies.

With the naive method of building a CPU hand warmer out of the way, here’s the pros and cons of this project, and how it can be made better. First off, using an old AMD processor was a great idea. These things are firestarters, and even though this processor preceded the 100+ W TDP AMD CPUs, it should work well enough.

That said, this is not how you waste power in a CPU. Ideally, the processor should do some work, with more active gates resulting in higher power consumption. If this were an exceptionally old processor, a good, simple option would be freerunning the chip, or having the CPU count up through its address space. This can be done by tying address lines low or high, depending on the chip. That’ll waste a significant amount of power. Randomly poking pins hoping for the right power consumption is not the way to get the most heat out of this CPU.

Of course, the above paragraph is just theory. The eating is in the pudding, or some other disfigured colloquialism, so here’s a quad-core 386 coffee warmer. This project from [magnustron] uses four 80386 CPUs powered via USB to make a nice desktop hotplate for your cuppa. Of course being powered by USB means there’s only 500mA to go around, and the ΔT is comparable to [GreatScott]’s AMD and hot glue hand warmer. Thus we get to the crux of the issue: 5V and 500mA isn’t very hot. Until cheap USB-C power banks, with ten or twelve Watts flood in from China, the idea of a USB powered heater is a fool’s errand. It does make for some great AMD firestarter jokes, though, so we have to give [GreatScott] credit for that.

END_OF_DOCUMENT_TOKEN_TO_BE_REPLACED

[Shenzhen] wanted a garment that would protect him from a jolt, while keeping him toasty in the cold weather. Well that’s not it at all, these are merely two of his projects using the same material in different ways.

We’re going to start with the infrared image on the right. This is a vest with chest and back pieces made of carbon tape totaling two meters of the material swirled on each side. Hook it to a power source and the carbon tape warms the wearer. Portability is something of an issue as each “element” takes 36 W of power (3A at 12V). Click through for advice on how to interface the tape with the power source.

Onto the main event… avoiding electrical shock when you get all up in the grill of that mall cop you’re hated for years. [Shenzhen’s] jacket is really just an ordinary long-sleeved coat. But he separated the lining at the bottom seam and used fusible material to hold the carbon tape in place. The carbon tape provides a better conductor than your skin, preventing the shock from stunning you as it was intended. This really is the thing of superheroes, or former editors who should have known better. Why toast your bread evenly when you can burn low-resolution images instead? Meet the Super Mega Mega Toaster, a University project created by [Scott van Haastrecht] for his Creative Technology course.

Now you may be thinking that this has been done before. And indeed, a bit of searching will lead you to a post about toasting Jesus.  But that is a one-shot toaster hack which simply used a stencil to block heat to create a certain pattern. This is a mechanical overhaul for the toaster concept. It uses one row of six heating elements. Each is connected to a servo motor which moves the element next to the bread or away from it based on the pattering being printed. A stepper motor then moves the bread up so that the next row can be printed. All of this is mounted in a laser-cut wood frame which makes us just a bit nervous because the purpose of the elements is to burn stuff.

See a demo of the toaster, as well as its internal components in the clip after the jump.

END_OF_DOCUMENT_TOKEN_TO_BE_REPLACED