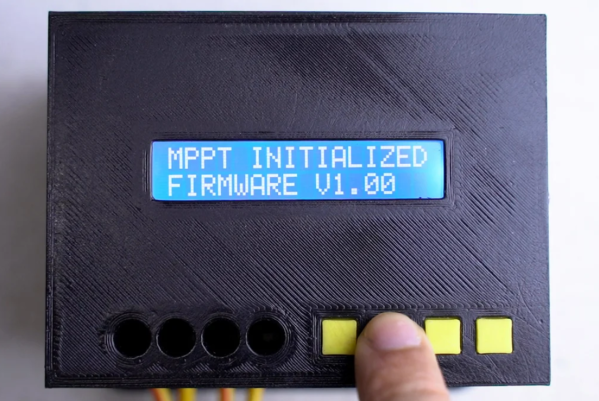 In days of yore when solar panels weren’t dirt cheap, many people (and even large energy companies) used solar trackers to ensure their panels were always physically pointed at the sun to make sure they harvested every watt of energy possible. Since the price of panels has plummeted, though, it’s not economical to install complex machines to track the sun anymore. But all solar farms still track something else, called the Maximum Power Point (MPP), which ensures that even stationary panels are optimized for power production.

While small MPP trackers (MPPT) are available in solar charge controllers in the $200 range that are quite capable for small off-grid setups, [ASCAS] aka [TechBuilder] decided to roll out an open source version with a much lower price tag since most of the costs of these units are in R&D rather than in the actual components themselves. To that end, the methods that he uses for his MPPT are essentially the same as any commercial unit, known as synchronous buck conversion. This uses a specially configured switch-mode power supply (SMPS) in order to match the power output of the panels to the best power point for any given set of conditions extremely rapidly. It even works on many different battery configurations and chemistries, all configurable in software.

This build is incredibly extensive and goes deep into electrical theory and design choices. One design choice of note is the use of an ESP32 over an Arduino due to the higher resolution available when doing analog to digital conversion. There’s even a lengthy lecture on inductor core designs, and of course everything on this project is open source. We have also seen the ESP32 put to work with MPPT before, although in a slightly less refined but still intriguing way.

Thanks to [Sofia] for the tip!

END_OF_DOCUMENT_TOKEN_TO_BE_REPLACED 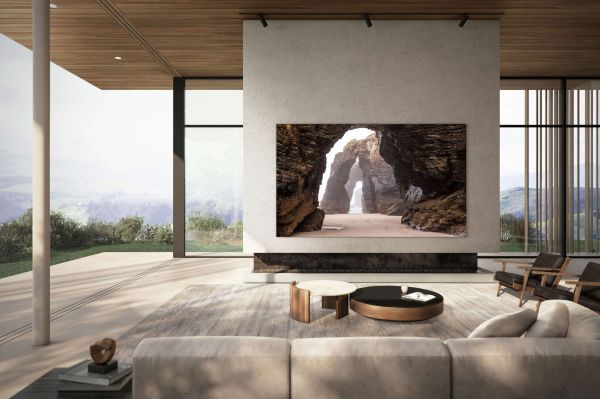 We’re accustomed to seeing giant LED-powered screens in sports venues and outdoor displays. What would it take to bring this same technology into your living room? Very, very tiny LEDs. MicroLEDs.

MicroLED screens have been rumored to be around the corner for almost a decade now, which means that the time is almost right for them to actually become a reality. And certainly display technology has come a long way from the early cathode-ray tube (CRT) technology that powered the television and the home computer revolution. In the late 1990s, liquid-crystal display (LCD) technology became a feasible replacement for CRTs, offering a thin, distortion-free image with pixel-perfect image reproduction. LCDs also allowed for displays to be put in many new places, in addition to finally having that wall-mounted television.

Since that time, LCD’s flaws have become a sticking point compared to CRTs. The nice features of CRTs such as very fast response time, deep blacks and zero color shift, no matter the angle, have led to a wide variety of LCD technologies to recapture some of those features. Plasma displays seemed promising for big screens for a while, but organic light-emitting diodes (OLEDs) have taken over and still-in-development technologies like SED and FED off the table.

While OLED is very good in terms of image quality, its flaws including burn-in and uneven wear of the different organic dyes responsible for the colors. MicroLEDs hope to capitalize on OLED’s weaknesses by bringing brighter screens with no burn-in using inorganic LED technology, just very, very small.

So what does it take to scale a standard semiconductor LED down to the size of a pixel, and when can one expect to buy MicroLED displays? Let’s take a look. END_OF_DOCUMENT_TOKEN_TO_BE_REPLACED 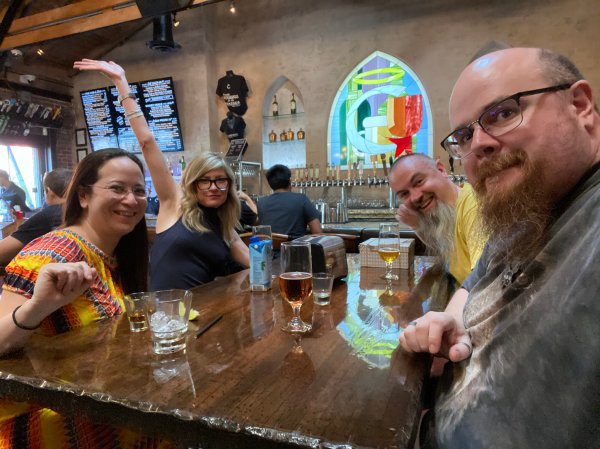 Having found success in different areas, it’s a pleasure to hear from Erika Earl, Paul Beech, and Spencer Owen during a panel discussion at the 2019 Hackaday Superconference. Led by Tindie’s Jasmine Brackett, the panel covers some of the background needed to develop a product and get it into the hands of your customers.

Erika’s origin story begins with an interest in electronics during her teenage years that led to work in recording studios. It seems nobody on staff there was interested in repairing anything. Every company needs a hacker to make sure everything continues to work and she decided to take on the role.

From there Erika found her way into the world of manufacturing and has never looked back. You may remember hearing some of her experiences in her 2016 Hackaday Supercon talk on turning your manufacturing mistakes in a learning experience. During this panel she recounts one particularly painful experience when over-torque on a six-layer PCB damaged traces and led to extensive manual rework; always include a torque-spec!

END_OF_DOCUMENT_TOKEN_TO_BE_REPLACED 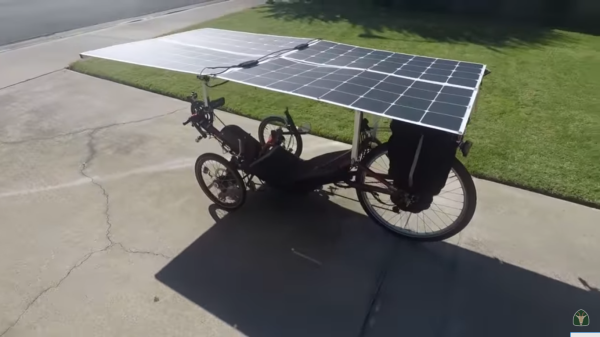 END_OF_DOCUMENT_TOKEN_TO_BE_REPLACED

Building your own weather station is a fun project in itself, but building it to be self-sufficient and off-grid adds another set of challenges to the mix. You’ll need a battery and a solar panel to power the station, which means adding at least a regulator and charge controller to your build. If the panel and battery are small, you’ll also need to make some power-saving tweaks to the code as well. (Google Translate from Italian) The tricks that [Danilo Larizza] uses in his build are useful for more than just weather stations though, they’ll be perfect for anyone trying to optimize their off-grid projects for battery and solar panel size.

When it comes to power conservation, the low-hanging fruit is plucked first. [Danilo] set the measurement intervals to as long as possible and put the microcontroller (a NodeMCU) to sleep in between. Removing the power from the sensors when the microcontroller was asleep was another easy step, but the device was still crashing overnight. Then he turned to a hardware solution and added a more efficient battery charger to the setup, which saved even more power. This is all the more impressive because the station communicates via WiFi which is notoriously difficult to run in low-power applications.

Besides the low power optimizations, the weather station itself is interesting for its relative simplicity. It could be built with things most of us have knocking around. Best of all, [Danilo] published the source code on his site, so most of the hard work has been done already. If you’re thinking he seems a little familiar, it’s because we’ve featured some of his projects before, like his cheap WiFi extender antenna and his homemade hybrid tube amplifier. 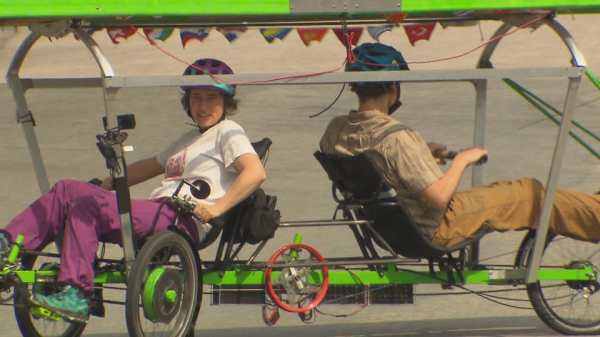 If you’re a fan of endurance racing motor vehicles, there’s one that puts the 24 Hours of Le Mans, the Dakar Rally, and the Baja 1000 to shame, and the race doesn’t even involve cars. Indeed, the vehicles used for this massive trek from France to China are electric bicycles, powered only by solar panels. This is the epic Sun Trip endurance race, and one of its competitors built a unique tandem bike that is powered both by pedaling, rowing, and the solar panels.

The tandem bike is interesting on its own since the atypical design uses a back-to-back layout which means one person is facing backward, but the storage space is dramatically increased over the normal forward-facing layout. The person in the rear doesn’t pedal, though. [Justin_le] built an upper-body-powered rowing station for that spot so that the person riding back there can rest their legs but still help propel the vehicle. Of course, there’s also a solar panel roof so the two riders can pedal and row in the shade, which includes MPPT and solar tracking which drives a small electric motor on board as well.

This race started in June but is still going on. There’s a live GPS feed so you can keep up with the teams, and if you get really inspired you can go ahead and sign up for the 2019 race as well. This particular bike was also featured on Radio Canada as well if you’d like to learn more about it.

Thanks to [Arthur] for the tip!

Ever on the lookout for creative applications for tech, [Andres Leon] built a solar powered battery system to keep his Christmas lights shining. It worked, but — pushing for innovation — it is now capable of so much more.

The shorthand of this system is two, 100 amp-hour, deep-cycle AGM batteries charged by four, 100 W solar panels mounted on an adjustable angle wood frame. Once back at the drawing board, however, [Leon] wanted to be able track real-time statistics of power collected, stored and discharged, and the ability to control it remotely. So, he introduced a Raspberry Pi running Raspbian Jessie Lite that publishes all the collected data to Home Assistant to be accessed and enable control of the system from the convenience of his smartphone. A pair of Arduino Deuemilanoves reporting to the Pi control a solid state relay powering a 12 V, 800 W DC-to-AC inverter and monitor a linear current sensor — although the latter still needs some tinkering. A in-depth video tour of the system follows after the break!