END_OF_DOCUMENT_TOKEN_TO_BE_REPLACED

Anyone who owns their own pool knows it’s not as simple as filling it up with water and jumping in whenever you want. There’s pool covers to deal with, regular cleaning with the pool vacuum and skimmers, and of course, all of the chemicals that have to be added to keep the water safe. While there are automatic vacuums, there aren’t a whole lot of options for automating the pool chemicals. [Clément] decided to tackle this problem, eliminating one more task from the maintenance of his home. (Google Translate from French.)

The problem isn’t as simple as adding a set amount of chemicals at a predetermined time. The amount of chemicals that a pool owner has to add are dependent on the properties of the water, and the amount of time that’s elapsed since the previous chemical treatment, and the number of people who have been using the water, and whether or not the pool cover is in use. To manage all of this, [Clément] used an ORP/Redox probe and a pH probe, and installed both in the filtration system. The two probes are wired to an Arduino with an ethernet shield. The Arduino controls electrically actuated chemical delivery systems that apply the required amount of chemicals to the pool, keeping it at a nice, healthy balance.
END_OF_DOCUMENT_TOKEN_TO_BE_REPLACED

Scientific research, especially in the area of robotics, often leverages cutting-edge technology. Labs filled with the latest measurement and fabrication gear are unleashed on the really tough problems, like how to simulate the exquisite sensing abilities of human skin. One lab doing work in this area has taken a different approach, though, by building multi-functional sensors arrays from paper.

A group from the King Abdullah University of Science and Technology in Saudi Arabia, led by [Muhammad M. Hussain], has published a fascinating paper that’s a tour de force of getting a lot done with nothing. Common household items, like Post-It notes, kitchen sponges, tissue paper, and tin foil, are used to form the basis of what they call “paper skin”. Fabrication techniques – scissors and tape – are ridiculously simple and accessible to anyone who made it through kindergarten.

They do turn to a Circuit Scribe pen for some of their sensors, but even this nod to high technology is well within their stated goal of making it possible for anyone to fabricate sensors at home. The paper goes into great detail about how the sensors are made, how they interact, and how they are interfaced. It’s worth a read to see what you can accomplish with scraps.

For another low-tech paper-based sensor, check out this capacitive touch sensor keyboard.

Thanks for the tip, [Mattias] 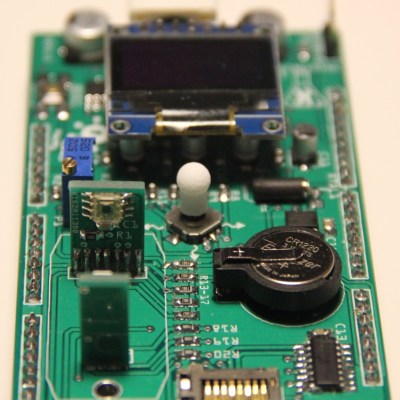 Controlling the pH level of a solution is usually a tedious task. Adding an acid or base to the solution will change the pH, but manually monitoring the levels and adding the correct amount isn’t fun. [Reza] rigged up an automated pH controller to keep a solution’s pH steady.

The build uses an Arduino with a LCD shield, screw terminal shields, and [Reza]’s own pH shield attached. A peristaltic pump is used to pump the pH down acid into the solution. This type of pump isolates the fluid from the pump parts, preventing contamination of the solution. The pump is controlled using a PowerSwitch Tail, allowing the Arduino to control the flow of fluid.

An Omega pH probe is used to read the pH level. [Reza]’s open source firmware has support for calibrating the probe to ensure accurate readings. Once it’s set up, the screen displays the pH level and the current state of the system. The pump is enabled when the pH rises out of the desired range.

After the break, check out a video walk through of the device.

END_OF_DOCUMENT_TOKEN_TO_BE_REPLACED

Nearly everything at [HAD] is at least based on science in some way or another. If, however, you would like to do some actual scientific experiments with stuff around the house, [Observationsblog] might be for you.

The particular posts that [Ken] wrote in to tell us about were all about acids, bases, and natural indicators. In his first post he goes over some definitions of acids, bases, and what pH exactly means. A good refresher for those that have forgotten some of their high school (or college) chemistry classes.

The other two posts have to do with making your own natural acid/base indicators. The first is called Anthocyanin, and can be extracted from Red Cabbage.  Quite specific directions can be found here. Similar directions can be found to turn the Indian spice of [Turmeric] into an indicator as well. Although these concepts probably won’t help build your next robot, they could easily inspire young minds for a great science fair project!