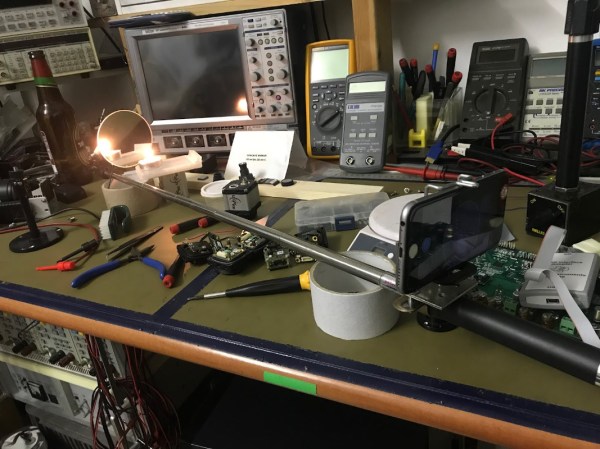 Schlieren imaging is a technique for viewing the density of transparent fluids using a camera and some clever optical setups. Density of a fluid like air might change based on the composition of the air itself with various gasses, or it may vary as a result of a sound or pressure wave. It might sound like you would need a complicated and/or expensive setup in order to view such things, but with a few common things you can have your own Schlieren setup as [elad] demonstrates.

His setup relies on a cell phone, attached to a selfie stick, with a spherical mirror at the other end. The selfie stick makes adjusting the distance from the camera to the mirror easy, as a specific distance from the camera is required as a function of focal length. For cell phone cameras, it’s best to find this distance through experimentation using a small LED as the point source. Once it’s calibrated and working, a circular field of view is displayed on the phone which allows the viewer to see any change in density in front of the mirror.

The only downside of this build that [elad] notes is that the selfie stick isn’t stiff enough to prevent the image from shaking around a little bit, but all things considered this is an excellent project that shows a neat and useful trick in the photography/instrumentation world that could be useful for a lot of other projects. We’ve only seen Schlieren imaging once before and it used a slightly different method of viewing the changing densities.

END_OF_DOCUMENT_TOKEN_TO_BE_REPLACED

It’s high time us Muggles got our hands on the hardware used to take Magical Photographs as seen in The Daily Prophet. The first pioneering step in that direction has been taken by [Abhishek] who built this moving picture taking polaroid-ish camera, which he’s calling the “Instagif NextStep”. It’s a camera that records a short, three second video, converts it to GIF and ejects a little cartridge which displays the animated photo.

This amazing piece of hardware has been painstakingly built, and the finished product looks great. The nice thing about building such projects, in [Abhishek]’s own words, is that “it involves a bunch of different skill sets and disciplines – hardware, software, 3D modeling, 3D printing, circuit design, mechanical/electrical engineering, design, fabrication etc that need to be integrated for it to work seamlessly.”
END_OF_DOCUMENT_TOKEN_TO_BE_REPLACED 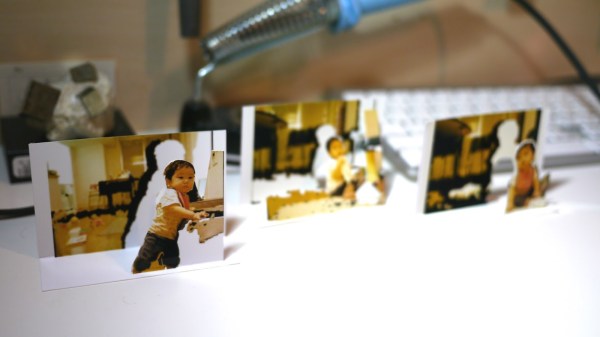 If you’re into developing your own photographs you might try mixing your own emulsion. [Jimmy Hartnett] worked out the chemical reaction necessary to make a photosensitive medium using Silver Chloride. His process lets him manufacture canvas that can be use like photo paper. The gist of it involves coating the back of a canvas with Gesso to prevent the emulsion from passing all the way through. He then floats the canvas face-down to apply the emulsion and skims it with a straight edge before it has time to set. You can see the results of some contact print testing in the image above. If anything, this makes a great piece of art to hang on the wall as it’s visually interesting and [Jimmy] has a personal connection because he not only made it himself, but came up with the process. When [Justin Quinnell] sent in his beer can pinhole camera, we were just floored. The parts are easy to obtain, and the process for building and ‘shooting’ with the camera are near effortless.

The really impressive part of this hack is letting your camera sit for 6 months facing the sun. Yes, you read that correct, a 6 month exposure. Check out after the break for one of his astonishing shots, and trust us, its well worth the click. END_OF_DOCUMENT_TOKEN_TO_BE_REPLACED

Here’s an odd little footnote we found while perusing the Comic Tools blog. [Matt Bernier]’s blog is dedicated to drawing and inking tutorials for comic artists. He uses a lot of example photographs that involve both hands. This week, at the bottom of his post on cleaning brushes, he included a photo to illustrate how he takes all of these point of view shots. The camera is strapped securely to his head using an old lanyard. He can see the display and access the controls on the back. After composing his shot, he just sets the timer, and you get a picture of what the process looks like from his perspective. Sure, it looks silly from this angle, but it really helps out the posts.