Almost every meter you find today will have a continuity tester. Connect the probes and it will beep if there is a short and won’t if there isn’t. But where is the short? That’s another problem when trying to measure a component that is connected to many other components. [Learn Electronics Repair] wanted to have a tool to find shorts on a board and wanted to build a tester that uses 4-wire resistance measurement to isolate the device under test without having to do surgery on the circuit. His $1 build appears in the video below.

The first part of the video talks about the theory behind resistance measurement with two and four wires. Let shows several diagrams, but he mentions that at one point he shows an incorrect schematic (at 12:03) instead of the early correct one (at 10:35) and mentions it, but if you are skimming the video, you might get confused.

END_OF_DOCUMENT_TOKEN_TO_BE_REPLACED 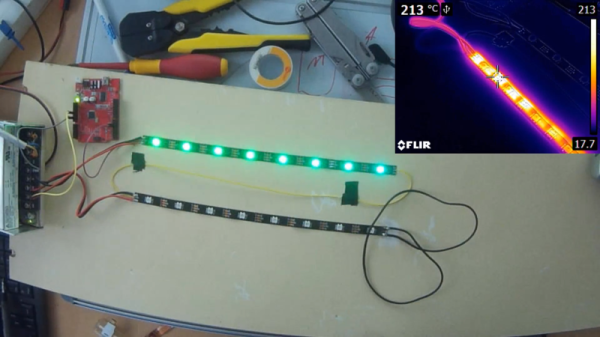 Modern LED strips are magical things. The WS2812 has allowed the quick and easy creation of addressable RGB installations, revolutionizing the science of cool glowy things. However, this accessibility means that it’s easy to get in over your head and make some simple mistakes that could end catastrophically. [Thomas] is here to help, outlining a common mistake made when building with LED strips that is really rather dangerous.

The problem is the combination of hardware typically used to run these LED strings. They’re quite bright and draw significant amounts of power, each pixel drawing up to 60 mA at full-white. In a string of just 10 pixels, the strip is already drawing 600 mA. For this reason, it’s common for people to choose quite hefty power supplies that can readily deliver several amps to run these installations.

It’s here that the problem starts. Typically, wires used to hook up the LED strips are quite thin and the flex strips themselves have a significant resistance, too. This means it’s possible to short circuit an LED strip without actually tripping the overcurrent protection on something like an ATX power supply, which may be fused at well over 10 amps. With the resistance of the wires and strip acting as a current limiter, the strip can overheat to the point of catching fire while the power supply happily continues to pump in the juice. In a home workshop under careful supervision, this may be a manageable risk. In an unattended installation, things could be far worse.

Thankfully, the solution is simple. By installing an appropriately rated fuse for the number of LEDs in the circuit, the installation becomes safer, as the fuse will burn out under a short circuit condition even if the power supply is happy to supply the current. With the example of 10 LEDs drawing 600 mA, a 1 amp fuse would do just fine to protect the circuit in the event of an accidental short.

It’s a great explanation of a common yet dangerous problem, and [Thomas] backs it up by using a thermal camera to illustrate just how hot things can get in mere seconds. Armed with this knowledge, you can now safely play with LEDs instead of fire. But now that you’re feeling confident, why not check out these eyeball-searing 3 watt addressable LEDs?

END_OF_DOCUMENT_TOKEN_TO_BE_REPLACED

There’s an inside joke among cyclists – the number of bikes you need is “n+1”, where “n” is your current number of bikes. The same probably also applies to the number of tools and equipment a hacker needs on their workbench. Enough is never enough. Although [David Johnson-Davies] has a couple of multimeters lying around, he still felt the urge to build a stand-alone continuity tester and has posted details for a super-simple ATtiny85 based Continuity Tester on his blog. For a device this simple, he set himself some tall design goals. Using the ATtiny85 and a few SMD discretes, he built a handy tester that met all of his requirements and then some.

The ATtiny85’s Analog Comparator function is perfectly suited for such a tester. One input of the comparator is biased such that there is a 51 ohm resistor between the input and ground. The output of the comparator toggles when the resistance between the other input and ground is either higher or lower than 51 ohms. Enabling internal pullup resistors in the ATtiny85 not only takes care of proper biasing of the comparator pins, but also helps reduce current consumption when the ATtiny85 is put to sleep. The test current is limited to 100 μA, making the tester suitable for use in sensitive electronics. And enabling the sleep function after 60 seconds of inactivity reduces standby current to just about 1 μA, so there is no need for a power switch. [David] reckons the CR927 button cell ought to last pretty long.

For those interested in building this handy tester, [David] has shared the Eagle CAD files as well as the ATtiny85 code on his Github repository or you could just order out some boards from OSHpark.

Have you ever wired up a piece of test equipment to a circuit or piece of equipment on your bench, only to have the dreaded magic smoke emerge when you apply power? [Steaky] did, and unfortunately for him the smoke was coming not from his circuit being tested but from a £2300 Clare H101 HiPot tester. His write-up details his search for the culprit, then looks at how the manufacturer might have protected the instrument.

[Steaky]’s employer uses the HiPot tester to check that adjacent circuits are adequately isolated from each other. A high voltage is put between the two circuits, and the leakage current between them is measured. A variety of tests are conducted on the same piece of equipment, and the task in hand was to produce a new version of a switch box with software control to swap between the different tests.

This particular instrument has a guard circuit, a pair of contacts that have to be closed before it will proceed. So the switch box incorporated a relay to close them, and wiring was made to connect to the guard socket. At first it was thought that the circuit might run at mains voltage, but when it was discovered to be only 5V the decision was made to use a 3.5mm jack on the switch box. Inadvertently this was left with its sleeve earthed, which had the effect of shorting out a DC to DC converter in the HiPot tester and releasing the smoke. Fortunately then the converter could be replaced and the machine brought back to life, but it left questions about the design of the internal circuit. What was in effect a logic level sense line was in fact connected to a low current power supply, and even the most rudimentary of protection circuitry could have saved the day.

We all stand warned to be vigilant for this kind of problem, and kudos to [Steaky] for both owning up to this particular fail and writing such a good analysis of it.

Our Fail Of The Week series has plenty to entertain the reader who is not of a nervous disposition. This isn’t the first fail to feature a suspect bit of connector wiring, not an unexpected short or even some magic smoke.