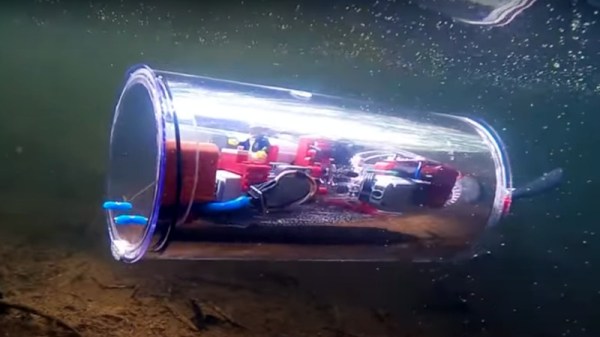 A submarine is by necessity a complex and safety-critical machine, but the principle upon which it depends is quite simple. The buoyancy is variable by means of pumping water in and out of tanks, allowing the craft to control the depth at which it sits. The [Brick Experiment Channel] has a series of posts describing in detail the construction of a working submarine, with a hull made from a plastic tube and mechanics made from Lego.

In this submarine the buoyancy tank is a syringe operated by a Lego motor, and the propulsion comes courtesy of a pair of Lego motors driven through ingenious magnetic couplings to avoid a shaft seal. To monitor depth there is both a laser distance sensor and a pressure sensor, and there is a Raspberry Pi Zero to control the whole show.

In the video below the break you can see the craft in action as it zips around a swimming pool at different depths, before setting off on a longer journey with on-board footage along a shady creek. It’s an extremely practical submarine, and one we wish we could try.

This is version 4.0, and it shows.  We had a look at version 3.0 last year, and it’s by no means the first submarine we’ve featured, here’s one made from PVC pipe.

END_OF_DOCUMENT_TOKEN_TO_BE_REPLACED 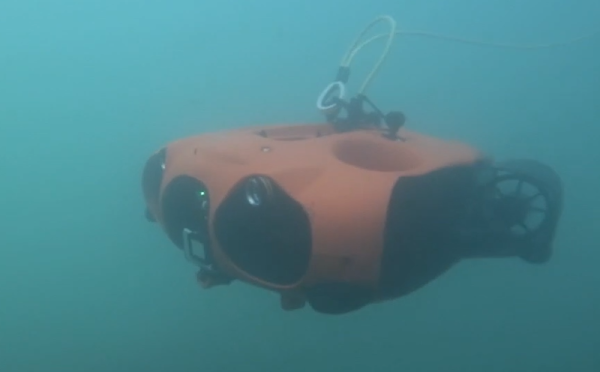 To follow a diver, the robot uses an acoustic signal from the user’s control unit to find the approximate location of the user. This works even in dark conditions. Once close enough, computer vision zeros in on the diver while a sonar system allows safe navigation.

END_OF_DOCUMENT_TOKEN_TO_BE_REPLACED 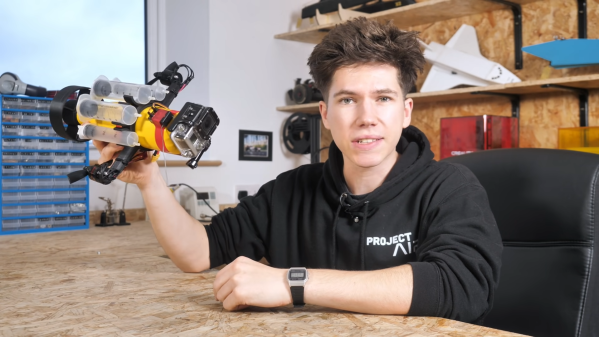 Submarines are one of the harder modes of transport to build in radio-controlled form. Doing so involves tangling with sealing electronics from water ingress and finding a way to control the thing underwater. It’s a challenge, but one relished by [Project Air] in his latest build.

The body of the sub was built from a drink bottle, serving as a stout container upon which could be mounted all the necessary hardware. Filling the bottle with water allowed buoyancy to be adjusted to a neutral level. Twin brushless motors were used for drive, while servos were waterproofed using a combination of rubber gaskets, olive oil, and sealing spray.

Control was via a floating 2.4 GHz receiver, as high-frequency radio signals don’t penetrate water very far. The floating box also carries an FPV transmitter to allow the sub to be piloted via video feed. Rather than using a ballast system, the sub instead dynamically dives by thrusting itself beneath the water’s surface.

Unfortunately, water sloshing around in the partially-filled drink bottle meant controlling the sub in pitch was virtually impossible. To fix this, [Project Air] filled the bottle completely, and then used some plugged syringes on the outside of the body to adjust buoyancy. The long heavy tether was also replaced with a much shorter one, and the sub became much more fun to drive around under water.

The build was actually built for a friendly contest with [DIY Perks], a fellow Youtuber whose efforts we covered recently. It also bears noting that better results can be had by using lower-frequency radio gear. Video after the break.

END_OF_DOCUMENT_TOKEN_TO_BE_REPLACED 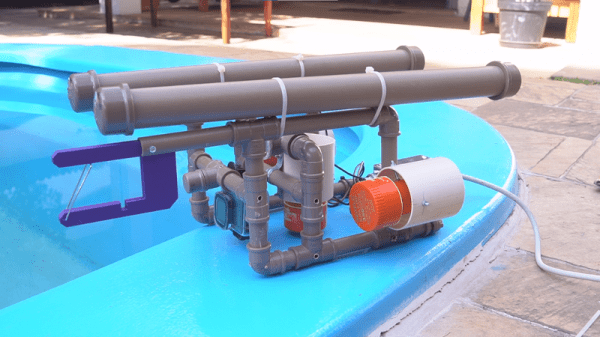 We doubt you could really live in [Pena’s] PVC submarine, but now the song’s stuck in our head anyway. Although the post is in Portuguese, you can get a pretty good idea of how it works, and translation software is better than ever. Transcending the language barrier, there are videos of just about every step of the construction. We didn’t, however, find a video of the vehicle in the water.

The plumber’s delight has modified motors for thrusters, and a camera as well. Epoxy potting keeps things waterproof. We’ve seen candle wax used for the same purpose in other builds.

END_OF_DOCUMENT_TOKEN_TO_BE_REPLACED 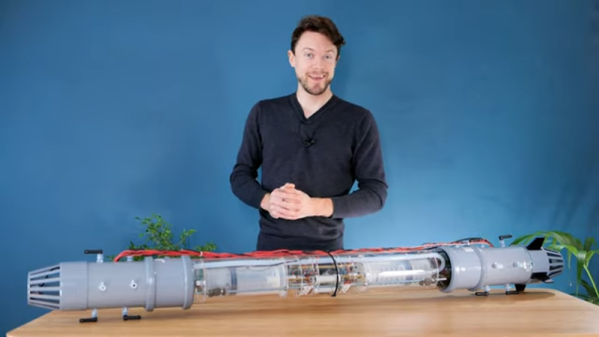 If you are tried of building things that fly, why not try a submarine like [DIYPerks] did? As you can see in the video below, the key is to control buoyancy, and the mechanism used is impressive. The sub has two giant syringes fore and aft to compress or decompress water. The plungers are now 3D-printed actuators that travel on a lead screw. Two high-torque motors and some batteries sandwiched in acrylic disks make up the rest. This is a big vessel — you won’t be trying this in your bathtub and maybe not even your pool unless it is a big one.

Of course, everything needs to be watertight. Instead of trying to waterproof a power switch, this sub uses a reed switch so that a nearby magnet can turn it on. Not an original idea, but we always think it is more elegant than seals and potting compounds.

END_OF_DOCUMENT_TOKEN_TO_BE_REPLACED 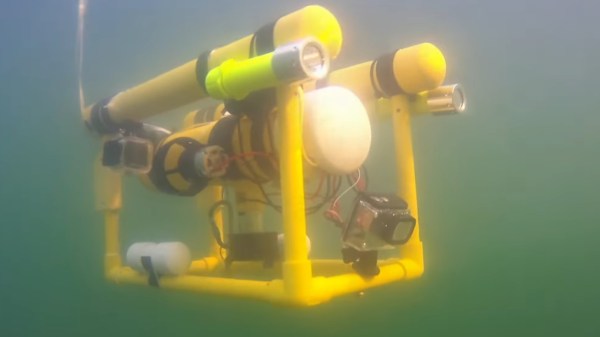 Underwater ROV builds are the sort of thing almost every hacker thinks about doing at least once, and some hackers even include Lego, magnets, and balloons in their builds! END_OF_DOCUMENT_TOKEN_TO_BE_REPLACED 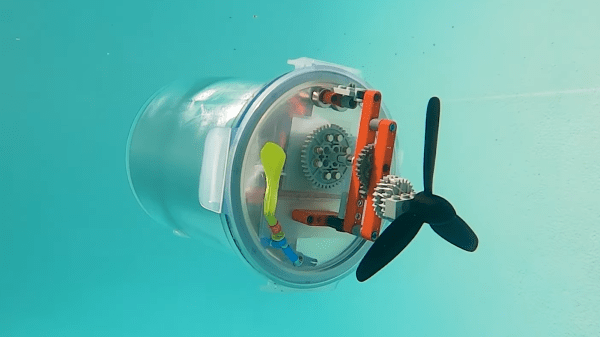