Each year brings new Christmas light shows, with synchronised music and wild blinking decorations to light your eyeballs ablaze. Now, many of us have dabbled in the dark arts of blinken, tinkering with LEDs or flashing a neon bulb or two. There’s plenty of tutorials on how to control all manner of lights, but they’re often written for novices. Learning the basics of electronics for the nth time when you just need to know the specifics of a protocol or what IC you need can be a total drag. That’s why [Bill Porter] has written the Engineer’s Guide to DIY Computer Controlled Holiday Lights.

[Bill] covers the topic from start to finish – not just the technical side of things, but practical considerations about where to source components, and timescales for keeping your project on track. It’s no coincidence this is coming out in January – if you want to get something big up and running for Christmas, it’s time to start now! The guide gives links to forum communities that put in large group orders for parts early, and ship them slow to save money.

Other areas covered include software for creating advanced sequences for your lighting setup, which allow you to map animations over your entire layout. There’s also tips on which controller hardware to use for incandescent lights and the now-ubiquitous WS2811 strings. Even better, [Bill] shares specific tips on how to avoid common problems like voltage drop over long pixel runs and communication issues.

It’s a testament to [Bill] and his experience – the guide is an excellent way to get right up to speed with the state of the art in DIY Christmas light shows, and will save you from all manner of pitfalls. If you need to build something big this year and don’t want to reinvent the wheel, this is for you.

It’s not the first time we’ve heard from [Bill] either – check out his stunning wedding invitations or his repair of a science museum exhibit.

END_OF_DOCUMENT_TOKEN_TO_BE_REPLACED

What makes the WS2812-style individually addressable pixel LEDs so inviting? Their rich colors? Nope, you can get RGB LEDs anywhere. Their form factor? Nope. Even surface-mount RGBs are plentiful and cheap. The answer: it’s the integrated controller. It’s just so handy to speak an SPI-like protocol to your LEDs — it separates the power supply from the data, and you can chain them to your heart’s desire. Combine this controller and the LEDs together in a single package and you’ve got a runaway product success.

But before the WS2812, there was the WS2811 — a standalone RGB controller IC. With the WS2812s on the market, nobody wants the lowly WS2811’s anymore. Nobody except [Michael Krumpus], that is. You see, he likes the old-school glow of incandescent, but likes the way the WS2812 strings are easy to drive and extend. So he bought a bag of WS2811s and put the two together.

The controller IC can’t handle the current that an incandescent bulb requires, so he added a MOSFET to do the heavy lifting. After linking a few of these units together, he discovered (as one does with the LED-based WS2812s eventually) that the switching transients can pull down the power lines, so there is a beefy capacitor accompanying each bulb.

He wanted each bulb to be independently addressable, so he only used the blue line of the RGB controller, which leaves two outputs empty. I’m sure you can figure out something to do with them.

Needless to say, we’ve seen a lot of WS2812 hacks here. It’s hard to pick a favorite. [Mike] of “mike’s electric stuff” fame built what may be the largest installation we’ve seen, and this hack that effectively projection-maps onto a randomly placed string of WS2812s is pretty cool. But honestly, no project that blinks or glows can go far wrong, right?

END_OF_DOCUMENT_TOKEN_TO_BE_REPLACED 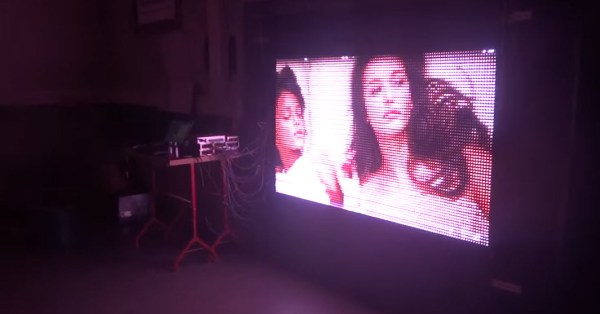 This massive LED display was assembled on a PVC banner (it can be rolled up!) measuring 2m by 1.5m, it boasts well over 6000 pixels, and as you can see from the photo — looks fantastic.

We recently published a post on How Many LEDs are Too Many, which spawned many comments showing off even more impressive displays with even higher LED counts. This is just one of them — and making it flexible as well? That’s just the icing on the cake.

To make the display flexible, [Elektric-Junkys] had a custom PVC banner printed with stripes to help them align 58 parallel strips of WS2811 LEDs on the surface.

END_OF_DOCUMENT_TOKEN_TO_BE_REPLACED 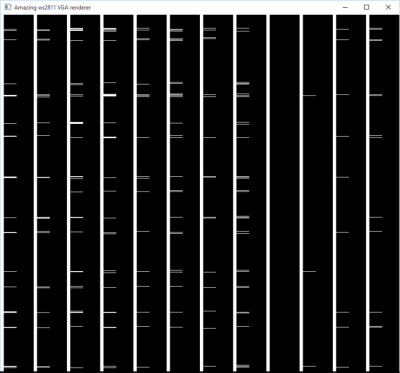 END_OF_DOCUMENT_TOKEN_TO_BE_REPLACED

Individually addressable RGB LEDs like Neopixels, WS2812s, and  WS2811s are the defacto standard for making blinkey glowey projects. To build a very bright display, you need a lot of them, relegating very bright RGB displays to those of us who can afford the hardware and figure out how to drive that many LEDs. For his Hackaday Prize entry, [AJ Reynolds] is cranking these tiny RGB LEDs up a notch by building an individually addressable 10 Watt RGB floodlight.

Instead of building an RGB LED floodlight from scratch, [AJ] is leveraging the most mediocre of what China has to offer. He found 10 Watt RGBs for a dollar a piece and a few floodlight cases that cost about $5 a piece. By dispensing with the white LED in the floodlight case and replacing it with a 10 Watt RGB LED and some custom circuitry, [AJ] can build a powerful RGB floodlight with a BOM cost of under $15.

While there are big RGB floodlights out there, controlling them either means a custom proprietary protocol or messing around with DMX. A floodlight that speaks the same language as a WS2811 leverages an enormous amount of work from the world of Arduino and a lot of projects from around the Internet, making this a great entry for really bright blinkies and an excellent entry for The Hackaday Prize. 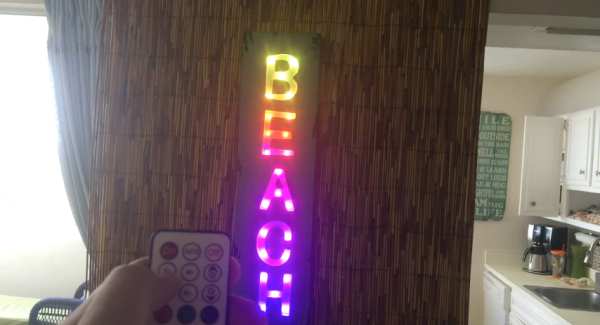 [Warrior_Rocker’s] family bought a fancy new sign for their beach house. The sign has the word “BEACH” spelled vertically. It originally came with blue LEDs to light up each letter. The problem was that the LEDs had a narrow beam that would blind people on the other side of the room. Also, there was no way to change the color of the LEDs, which would increase the fun factor. That’s why [Warrior] decided to upgrade the sign with multi-colored LEDs.

After removing the cardboard backing of the sign, [Warrior] removed the original LEDs by gently tapping on a stick with a hammer. He decided to use WS2811 LED pixels to replace the original LEDs. These pixel modules support multiple colors and are individually addressable. This would allow for a wide variety of colors and animations. The pixels came covered in a weatherproof resin material. [Warrior] baked the resin with a heat gun until it became brittle. He was then able to remove it entirely using some pliers and a utility knife. Finally, the pixels were held in place with some hot glue.

Rather then build a remote control from scratch, [Warrior] found a compatible RF remote under ten dollars. The LED controller was removed from its housing and soldered to the string of LEDs. It was then hot glued to a piece of cardboard and placed into the sign’s original battery compartment. Check out the video below for a demonstration. END_OF_DOCUMENT_TOKEN_TO_BE_REPLACED