[Starhawk] had an old Pitney Bowes G799 postage scale that wasn’t working as it should. After years of faithfully measuring packages and cooking ingredients, the scale stopped working. At first it fell out of calibration. Then the power up sequence stopped working. The scale normally would turn on, light up the entire display, then change to dashes, and finally set itself to 0.0 lbs. In this case, it would get stuck at the dashes and never change to 0.0.

[Starhawk] ended up purchasing another duplicate scale from eBay, only to find that when it arrived it had the exact same power up problem. Using deductive reasoning, he decided that since the scale was broken during shipping the problem would likely be with a mechanical component. He turned out to be correct. The cheap momentary power button was at fault. When pressing the button, the contact would get stuck closed preventing the scale from zeroing out properly. [Starhawk] easily fixed his problem by replacing the switch.

Next [Starhawk] replaced the old scale’s LCD module with one from the new scale, since the old one looked to be on its way out. The scale still had a problem correctly measuring weight. [Starhawk] tried swapping the load cell from the new scale to the old one, but he found that the new load cell had some kind of problem that prevented the scale from zeroing out properly. The solution ended up being to use the newer “analog board” as [Starhawk] calls it.  The end result was the old scale with two newer circuit boards, an older load cell, and a new power switch. Next time it might be easier to just build his own scale.

[Morten] has been busy recently making a pen plotter. It is a simple and elegant build that he completely designed from the ground up. There are no extra frivolous parts here. The frame is made from laser-cut plexiglass which makes fabrication easy if you have access to a laser cutter. Two NEMA17 motors are responsible for the machine’s movement. One moves the pen carriage back and forth by way of a belt. The other is connected by laser-cut gears to a roller bar, scavenged from an ink jet printer, that moves the paper media forward and aft underneath the pen.

The software chain used here is sort of uncommon compared to other inexpensive DIY CNC machines we see here on Hackaday. [Morten] creates his geometry with Rhino, then uses a plugin called Grasshopper to generate the g-code that controls the machine. That g-code is sent using gRemote to an Arduino flashed with the contraptor.org g-code interpreter. A RAMPS board takes the step and direction signals generated by the Arduino and moves the two stepper motors appropriately.

In typical open-supporting fashion, [Morten] has made his design files freely available for anyone to download. His plotter moves the pen side to side and the paper front to back in order to draw shapes but that’s not the only way a plotter can work. Check out this polar plotter and this one that hangs.

Check out the video after the break…

END_OF_DOCUMENT_TOKEN_TO_BE_REPLACED

[Don] wanted to bring his alarm system into the modern age. He figured that making it more connected would do the trick. Specifically, he wanted his alarm system to send him an SMS message whenever the alarm was tripped.

[Don] is using an Arduino nano to monitor the alarm signal. This meant that the 12V signal needed to be stepped down. He ran it through a resistor and a Zener diode to lower the voltage to something the Arduino can handle. Once the Arduino detects a signal, it uses an ESP8266 WiFi module to send an email. The address [Don] used is the email-to-SMS address which results in a text message hitting his phone over the cell network.

The Arduino also needed power. [Don] found a screw terminal on the alarm system circuit board that provided a regulated 12V output. He ran this to another power regulator board to lower the voltage to a steady 5V. This provides just the amount of juice the Arduino needs to run, and it doesn’t rely on batteries. [Don] provides a good explanation of the system in the video below. END_OF_DOCUMENT_TOKEN_TO_BE_REPLACED

Remember those flipbooks you doodled into your history textbooks while you waited for the lunch bell? [Maric] takes the general principles of flipbooks and turns them on their head, giving our brain a whirl in the process. By splicing multiple frames into one image, he can bring animations to life onto a single page.

The technique is simple, but yields impressive results. By overlaying a pattern of vertical black bars onto his image, only a small fraction of the image is visible at any given point. The gaps in the pattern belong to a single frame from the animation. As [Maric] slides the pattern over the image, subsequent frames are revealed to our eyes, and our brain fills in the rest.

A closer look reveals more detail about the constraints imposed on these animations. In this case, the number of frames per animation loop is given by the widths in the transparency pattern. Specifically, it is the number of transparent slits that could fit, side-by-side, within an adjacent black rectangle.

The trick that makes this demonstration work so nicely is that the animated clips finish where they start, resulting in a clean, continuous illusion.

Don’t believe what you see? [Maric] has linked the pattern and images on his video so you can try them for yourself. Give them a go, and let us know what you think in the comments.

END_OF_DOCUMENT_TOKEN_TO_BE_REPLACED 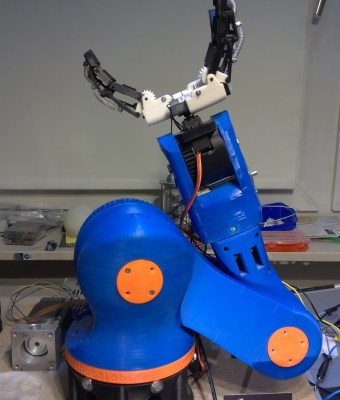 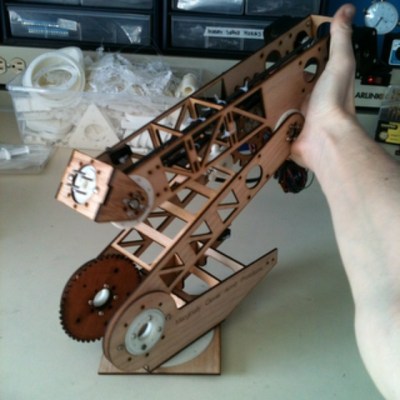 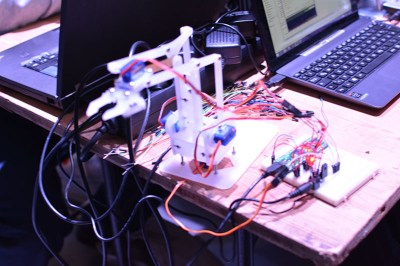 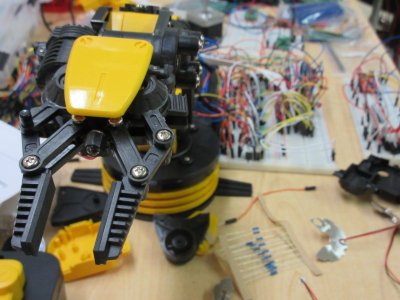 If you haven’t looked around the RepRap project in a while, you probably haven’t heard about the Smoothieboard. It’s an extremely unique electronics board for 3D printers, laser cutters, and CNC machines that is trying to get away from Atmel and AVR microcontrollers and towards more powerful ARM micros. On the Smoothieboard, you’ll find enough five motor drivers, six big ‘ol MOSFETs for hot ends, fans, and beds, enough thermistor inputs for just about anything, and an Ethernet jack, because all 3D printers should be able to run headless.

Of course you’re always welcome to not contribute to open source projects, and for those consummate consumers, we have the Smoothieboard 5XC available in the Hackaday Store.

[Dennis’] clock is made from several cylindrical blocks of ice stacked on top of one another. There are six columns of ice blocks. The blocks were made by pouring water into empty margarine containers and freezing them. Once they were frozen, [Dennis] bore a 5/16″ hole into the bottom of each block to house an LED. Wires ran from the LEDs back into the drainage port of a cooler.

The cooler housed the main electronics. The LED controller board is of [Dennis’] own design. It contains six TLC59282 chips allowing for control of up to 96 LEDs. Each chip has its output lines running to two RJ45 connectors. [Dennis] couldn’t just use one because one of the eight wires in the connector was used as a common power line. The main CPU is an Arduino. It’s hooked up to a DS3234 Real Time Clock in order to keep accurate time. The oscillator monitors temperature in order to keep accurate time even in the dead of winter. END_OF_DOCUMENT_TOKEN_TO_BE_REPLACED