[Matt Reimer] is a farmer in Southwestern Manitoba, Canada. It’s grain country, and at harvest time he has a problem. An essential task when harvesting is that of the grain cart driver, piloting a tractor and grain trailer that has to constantly do the round between unloading the combine harvester and depositing the grain in a truck. It’s a thankless, unrelenting, and repetitive task, and [Matt]’s problem is that labour is difficult to find when every other farmer in the region is also hiring.

His solution was to replace the driver with a set of Arduinos and a Pixhawk autopilot controlling the tractor’s cab actuators, and running ArduPilot, DroneKit, and his own Autonomous Grain Cart software. Since a modern tractor is effectively a fly-by-wire device this is not as annoying a task as it would have been with a tractor from several decades ago, or with a car. The resulting autonomous tractor picks up the grain from his combine, but he reminds us that for now it still deposits the harvest in the truck under human control. It is still a work-in-progress with only one harvest behind it, so this project is definitely one to watch over the next few months.

Writing from the point of view of someone who grew up on a farm and has done her share of harvest-time tractor driving it’s possible to see both the strengths and weaknesses of an autonomous grain cart. His fields on the Canadian prairie are very large and flat, there is plenty of space and the grain makes its way from the field to the elevator in a truck. To perform the same task in the smaller and irregular fields of southern England for example with a mile round trip down country lanes to the grain store would be a much greater challenge. Aside from that it’s worth noting that his John Deere is a 220hp 4WD workhorse that is capable of going over almost any terrain on a farm with very few obstacles able to stop it. This thing can do serious damage to life and property simply by running it over or driving straight through it, so safety has a dimension with an autonomous tractor in a way that it never will with for example a vacuum cleaner or even a lawnmower.

Those observations aside, this kind of technology undeniably represents a step change in farming practice on a par with the move from horse power to tractors in the first half of the last century. However the technological barriers that remain end up being solved, it’s likely that you’ll see plenty more machines like this in the fields of the future.

The video below the break shows the autonomous grain cart in action. Plenty of big-sky tractoring action, and for those of you unfamiliar with farming it should provide some understanding of the task of getting grain from combine to store.

We’ve talked about robotic farming more than once here at Hackaday. The gantry-based Farmbot, the six-legged Prospero robot farmer, or another hexapod confusingly also called Farmbot, for example. But these have all been hacker’s solutions to the problem using the concepts with which they are familiar. What makes [Matt]’s project different is that it is a farmer’s solution to a real farming problem by automating the machinery he already uses to do the job. Farmers have been doing what we would now call hacking at the hardware of their craft since time immemorial, [Matt]’s work is just the latest manifestation of a rich heritage.

END_OF_DOCUMENT_TOKEN_TO_BE_REPLACED

Modern surface mount components often need special tools for rework. However, those tools can be expensive. [Michael Skrepsky] wanted an infrared rework station, but didn’t like the price. So he built his own.

According to [Michael] he used a lot of scrap in the construction. . He used K-type thermocouples, optotriacs, triacs, a 20×4 display and, of course, an Arduino. An old bathroom heater, along with a 600W and 100W halogen bulb work as heaters.

END_OF_DOCUMENT_TOKEN_TO_BE_REPLACED 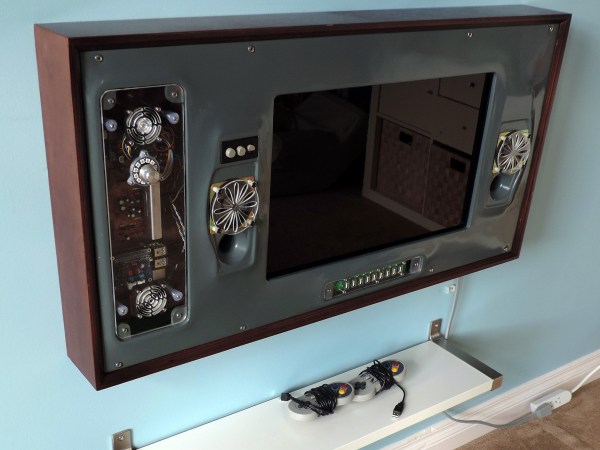 [buildxyz] had no opposition to his kids playing video games, but wanted something that offered a bit more parental control, a larger game selection, and was maybe a little more contained than a modern game console.

So, in his multi-part build log, he goes through all the steps of making a Raspberry Pi into a kid friendly wall-mounted game console. The frame is made from Baltic Birch plywood, and the edges look cool when stained. The display is an old HP monitor, and the speakers are simple beige bricks from the thrift store. The controllers hook into a USB hub on the front. It’s not a complicated build, but it’s very well done.

The coolest feature, from the parent’s point of view, is the combination lock on the front. A rotary encoder surrounded by NeoPixels provides the input and feedback. Depending on the code [buildxyz] inputs his children can receive different periods of dopamine hits, and if he enters a special code for occasions like birthdays, unlimited play time becomes available.

We hope he’s prepared to have the only four year olds who can crack safes on the block. The build looks awesome, and there’s not really a commercial product out there to match it. Watch the video.

END_OF_DOCUMENT_TOKEN_TO_BE_REPLACED 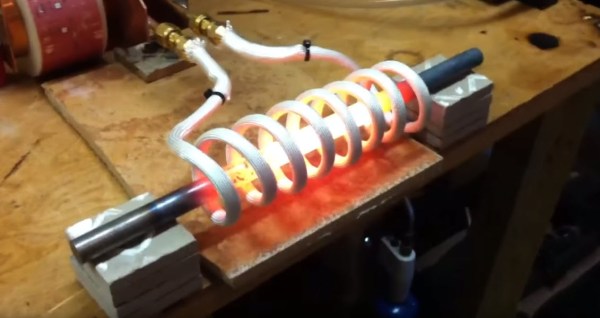 Ever want to try your hand at black smithing? Building a forge is expensive and tricky — especially if you live in an apartment! But we’re all tech nerds here — it’s way cooler to use induction heating to heat up your metal for forging. Fire is for cavemen! [Josh Campbell] is working on a kit to bring induction heating to the masses — he calls it the Reactor Forge.

The kit hasn’t launched yet, but you can follow his progress on his GitHub. Induction heating works by magnetically inducing current into the metal, where resistance turns the current into heat without physical contact. The Reactor Forge [Josh] has built runs off of a 220V circuit, and in the following demonstration, heats up a 6″ section of 1/2″ steel bar.

END_OF_DOCUMENT_TOKEN_TO_BE_REPLACED

Only a few days ago, a significant proportion of the Hackaday crew was leaving Goshen, Indiana after the fourth annual Midwest RepRap Festival. We go to a lot of events every year, and even when you include DEF CON, security conferences, ham swap meets, and Maker Faires, MRRF is still one of the best. The event itself is an odd mix of people rallying under a banner of open source hardware and dorks dorking around with 3D printer. It’s very casual, but you’re guaranteed to learn something from the hundreds of attendees.

Hundreds of people made the trek out to Goshen this year, and a lot of them brought a 3D printer. Most of these printers aren’t the kind you can buy at a Home Depot or from Amazon. These are customized machines that push the envelope of what consumer 3D printing technology. If you want to know what 3D printing will be like in two or three years, you only need to come to MRRF. It’s an incubator of great ideas, and a peek at what the future of 3D printing holds.

END_OF_DOCUMENT_TOKEN_TO_BE_REPLACED 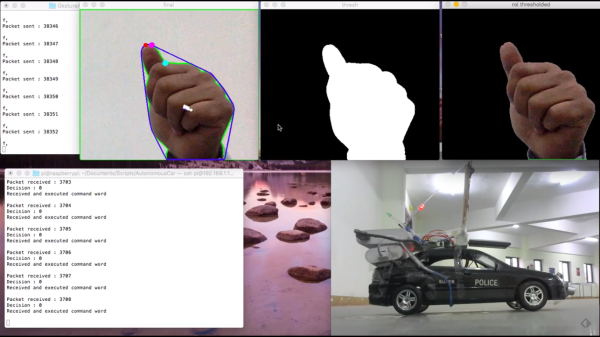 There are a number of ways to control an automobile without using the pedals, and sometimes even without using the steering wheel. Most commonly these alternative control mechanisms are installed in vehicles whose owners are disabled in some way, but [Anurag] has taken this idea of alternative control one step further. He has built a car that can be driven by hand gestures alone.

On a remote controlled car, a Raspberry Pi 2 was installed that handles processing and communication. A wireless network is created on the Pi, and a laptop connects to the Pi over the network. The web camera on the laptop regularly captures frames at 15 fps to check for the driver’s hand gestures. The image is converted to gray scale, thresholded, contours are obtained, and the centroid and farthest points are obtained.

After some calculations are done, a movement decision is taken. The decision is passed to the Pi, which in turn, passed that to the internal chip of the car. All of the code is available on the project’s github page. [Anurag] hopes that this can be scaled up to full sized cars in the future. We’ve seen gesture-based remote controls before that rely on Sonar sensors, so it’s interesting to see one that relies strictly on image processing.

END_OF_DOCUMENT_TOKEN_TO_BE_REPLACED

Our Hackaday Chief [Mike] sent me an e-mail the other day with a link to the Belgrade Hackaday Badge simulator. He clearly wanted me to enter something into the demo scene competition. The good news is that because of the simulator, you didn’t have to leave your desk to participate. The bad news is that I had very little time left at the end of the month, so I wanted to do something appealing but it had to be fairly easy to roll out. I wound up doing a very quick project but it had a few fine points that I thought I’d share. The end goal was to have an interesting display of Conway’s game of life on the badge.

By the way, there was a completely different project with the same goal by [Jeremias] on Hackaday.io. As far as I know, this was just the result of two people setting out to do the same thing. You’ll see the user interface is a good bit different, so you might see which you prefer.

If you haven’t seen it, the real badge is below. The emulator, of course, just runs as a window on your PC. For those that will be at the conference, or just want to program closer to the actual hardware, there is now a preconfigured MPLABX framework  for the PIC18LF25K50 and the bootloader/kernel running on this badge.