High up on the list of desirable technologies that are edging into the realm of the affordable for the experimenter is the thermal camera. Once the exclusive preserve of those with huge budgets, over the last few years we’ve seen the emergence of cameras that are more affordable, and most recently a selection of thermal camera modules that are definitely within the experimenter’s range. They may not yet have high resolution, but they are a huge improvement on nothing, and they are starting to appear in projects featured on sites like this one.

One such device is the Melexis MLX90621, a 16×4 pixel thermal sensor array in a TO39 can with an I2C interface. It’s hardly an impulse purchase in single quantities and nor is it necessarily the cheapest module available, but its price is low enough for [Alpha Charlie] to experiment with interfacing it to a Raspberry Pi for adding a thermal camera overlay to the pictures from its visible light camera.

The wiring for the module is simplicity itself, and he’s created a couple of pieces of software for it that are available on his GitHub repository. mlxd is a driver daemon for the module, and mixview.py is a Python graphical overlay script that places the thermal array output over the camera output. A run-through of the device and its results can be seen in the video below the break.

END_OF_DOCUMENT_TOKEN_TO_BE_REPLACED 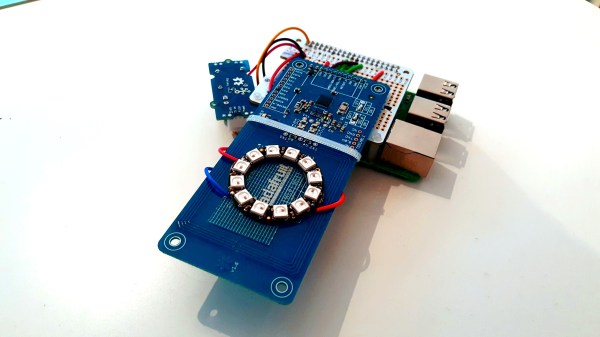 Group entry hacks are a favorite for hacker social groups. Why use old fashioned keys when you can use newfangled electronic keys? If you are looking to build a simple RFID-based security system to secure your important stuff, this project from Resin.io is a good place to start. In it, [Joe Roberts] outlines the process of building a simple RFID-triggered mechanism for their office door.

It’s a pretty simple setup that is composed of an RFID reader, a Rasperry Pi and a Neopixel ring. When someone places an RFID card against the reader hidden behind a poster by their front door, the reader grabs the code and the Pi compares it with a list of authorized users. If the card is on the list, the Pi triggers the door lock using a signal line originally designed to work with an intercom system. If the user isn’t on the list, a laser is triggered that vaporizes the interloper… well, that’s perhaps in the next version, along with an API that will allow someone to open the door from the company chat application.

At the moment, this is a clean, simple build that uses only a few cheap components, but which could be the basis for a more sophisticated security system in the future. 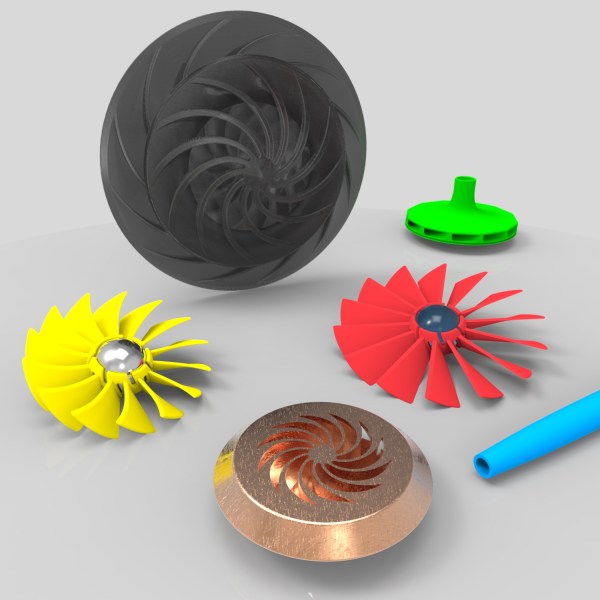 One of the major reasons anyone would turn to a 3D printer, even if they have access to a machine shop, is that there are some shapes that are not possible to make with conventional “subtractive manufacturing” techniques. There are a few more obvious reasons a lot of us use 3D printers over conventional machining such as size and cost, but there’s another major reason that 3D printers are becoming more and more ubiquitous. [Crumbnumber1] at Make Anything’s 3D Printing Channel shows us how powerful 3D printers are at iterative design with his air-powered tops. They incorporate fan blades that allow you to spin the top up to very high speeds by blowing air down onto it.

Iterative design is the ability to rapidly make prototypes that build and improve upon the previous prototype, until you’re left with something that does the job you need. Even with a machine shop at your disposal, it can be expensive to set up all of the tooling for a part, only to find out that the part needs a change and the tooling you have won’t work anymore. This is where 3D printers can step in. Besides all of their other advantages, they’re great for rapid prototyping. [Crumbnumber1] made a box full of tops and was able to test many different designs before settling on one that performed above and beyond everything that came before it.

The video below is definitely worth checking out. The design process is well documented and serves as a great model for anyone looking to up their rapid prototyping game.

END_OF_DOCUMENT_TOKEN_TO_BE_REPLACED

This isn’t the first time we’ve seen DIYers sending music over a laser beam but the brothers [Armand] and [Victor] are certainly in contention for sending the music the longest distance, 452 meter/1480 feet from their building, over the tops of a few houses, through a treetop and into a friend’s apartment. The received sound quality is pretty amazing too.

In case you’ve never encountered this before, the light of the laser is modulated with a signal directly from the audio source, making it an analog transmission. The laser is a 250mW diode laser bought from eBay. It’s powered through a 5 volt 7805 voltage regulator fed by a 12V battery. The signal from the sound source enters the circuit through a step-up transformer, isolating it so that no DC from the source enters. The laser’s side of the transformer feeds the base of a transistor. They included a switch so that the current from the regulator can either go through the collector and emitter of the transistor that’s controlled by the sound source, giving a strong modulation, or the current can go directly to the laser while modulation is provided through just the transistor’s base and emitter. The schematic for the circuit is given at the end of their video, which you can see after the break.

They receive the beam in their friend’s apartment using solar cells, which then feed a fairly big amplifier and speakers. From the video you can hear the surprisingly high quality sounds that results. So check it out. It also includes a little Benny Hill humor.

END_OF_DOCUMENT_TOKEN_TO_BE_REPLACED

[Cameron Meredith] starts the Hackaday.io page for one of his projects by quoting a Hackaday write-up: “A timepiece is rather a rite of passage in the world of hardware hacking“. We stand by that assertion, but we’d say most of the clocks we feature aren’t as capable as his project. He’s made a real-time-clock module controlled by a rubidium frequency standard, and since it also includes a GPS clock he can track local time dilation effects by comparing the two.

Surplus rubidium standards are readily available, but each description of one seems to feature a lot of old-fashioned hardware hacking simply to get it working. This one is no exception, an unusual connector had to be replaced and an extra power supply module attached. Once those modifications had been made and a suitable heatsink had been attached, he was able to bring the rubidium standard, an RTC module, and GPS module together with an ATMega32U4 miniature Arduino-compatible board and an LCD display. The firmware is functional, but he admits it is not finished.

All the project’s files can be found on the Hackaday.io page linked above. Future plans include also monitoring the NIST WWVB radio time signal from Fort Collins, Colorado, for an extra time dilation comparison.

We’ve featured innumerable clocks over the years here at Hackaday, but among them have been a few based upon atomic standards. More than one has been used as a lab reference standard, but most similar to this build is [Max Carters] experiments to check the accuracy of an atomic standard, also using the WWVB transmissions.

Flying a kite on a stormy day is not the wisest thing to do, except, of course, you’re intentionally trying to catch a lightning bolt. The guys from [kreosan] replicated the famous experiment, with which Benjamin Franklin once set out to prove the electrical nature of lightning.