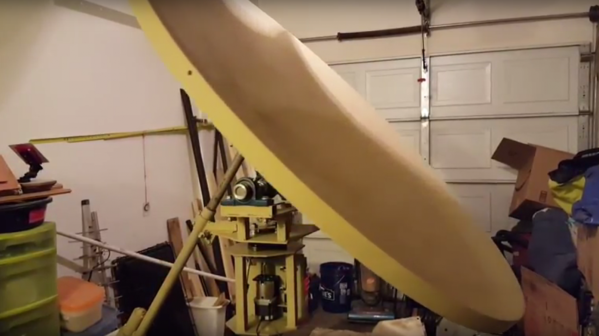 There’s a magnificent constellation of spacecraft in orbit around Earth right now, many sending useful data back down to the surface in the clear, ready to be exploited. Trouble is, it often takes specialized equipment that can be a real budget buster. But with a well-stocked scrap bin, a few strategic eBay purchases, and a little elbow grease, a powered azimuth-elevation satellite dish mount can become affordable.

The satellites of interest for [devnulling]’s efforts are NOAA’s Polar-orbiting Operational Environmental Satellites (POES), a system of low-Earth orbit weather birds. [devnulling] is particularly interested in direct reception of high-definition images from the satellites’ L-band downlink. The mount he came up with to track satellites during lengthy downloads is a tour de force of junkyard build skills.

The azimuth axis rotates on a rear wheel bearing from a Chevy, the elevation axis uses cheap pillow blocks, and the frame is welded from scrap angle iron and tubing. A NEMA-23 stepper with 15:1 gearhead rotates the azimuth while a 36″ linear actuator takes care of elevation. The mount has yet to be tested in the wind; we worry that sail area presented by the dish might cause problems. Here’s hoping the mount is as stout as it seems, and we’ll look forward to a follow-up.

It would work for us, but a 4-foot dish slewing around in the back yard might not be everyone’s taste in lawn appurtenances. If that’s you and you still want to get your weather data right from the source, try using an SDR dongle and chunk of wire.

END_OF_DOCUMENT_TOKEN_TO_BE_REPLACED 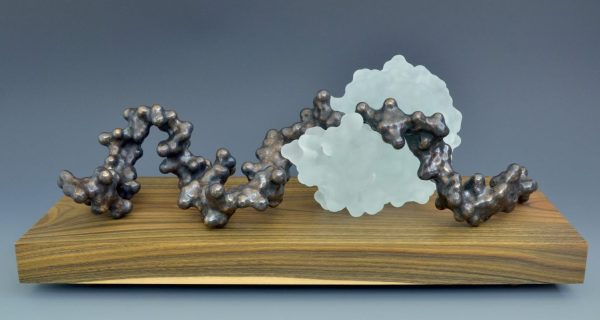 Biochemistry texts are loaded with images of the proteins, nucleic acids, and other biopolymers that make up life. Depictions of the 3D structure of macromolecules based on crystallography and models of their most favorable thermodynamic conformations are important tools. And some are just plain beautiful, which is why artist [Mike Tyka] has taken to using lost-PLA casting to create sculptures of macromolecules from bronze, copper, and glass.

We normally don’t cover strictly artistic projects here at Hackaday, although we do make exceptions, such as when the art makes a commentary on technology’s place in society. In [Mike]’s case, not only is his art beautiful and dripping with nerd street cred, but his techniques can be translated to other less artsy projects. 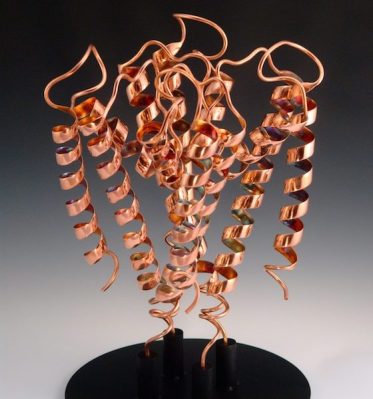 For “Tears”, his sculpture of the enzyme lysozyme shown in the banner image, [Mike] started with crystallographic data that pinpoints every peptide residue in the protein. A model is created for the 3D printer, with careful attention paid to how the finished print can be split apart to allow casting. Clear PLA filament is used for the positive because it burns out of the mold better than colored plastic. The prints are solvent smoothed, sprues and air vents added, and the positive is coated with a plaster mix appropriate for the sculpture medium before the plastic is melted out and the mold is ready for casting.

[Mike]’s sculpture page is well worth a look even if you have no interest in macromolecules or casting techniques. And if you ever think you’ll want to start lost-PLA casting, be sure to look over his build logs for plenty of tips and tricks. “Tears” is executed in bronze and glass, and [Mike]’s description is full of advice on how to handle casting such vastly different media.

END_OF_DOCUMENT_TOKEN_TO_BE_REPLACED

Gravity can be a difficult thing to simulate effectively on a traditional CPU. The amount of calculation required increases exponentially with the number of particles in the simulation. This is an application perfect for parallel processing.

For their final project in ECE5760 at Cornell, [Mark Eiding] and [Brian Curless] decided to use an FPGA to rapidly process gravitational calculations. This allows them to simulate a thousand particles at up to 10 frames per second. With every particle having an attraction to every other, this works out to an astonishing 1 million inverse-square calculations per frame!

The team used an Altera DE2-115 development board to build the project. General operation is run by a Nios II processor, which handles the VGA display, loads initial conditions and controls memory. The FPGA is used as an accelerator for the gravity calculations, and lends the additional benefit of requiring less memory access operations as it runs all operations in parallel.

This project is a great example of how FPGAs can be used to create serious processing muscle for massively parallel tasks. Check out this great article on sorting with FPGAs that delves deeper into the subject. Video after the break.

END_OF_DOCUMENT_TOKEN_TO_BE_REPLACED 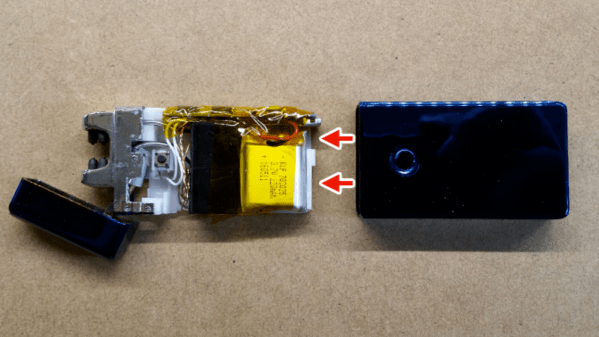 We’ve all been guilty of buying things we want, but don’t need. And that’s how [PodeCoet] found himself in possession of a couple of double-arc electric lighters, thanks to those far-eastern websites purveying cheap goods. ‘Tis the season of giving after all, justified [PodeCoet]. Being a hacker, the obvious thing to do was to make them belt out tinny tunes. If you’re still holding on to your gas lighters, don’t — because these electric ones are ‘oh so hackable’. Dual-arcs are the same, but twice the fun.

[PodeCoet] starts off with a tear down of the lighter, to figure out the schematic and understand how it works. There’s a charger IC for the LiPo, an unidentifiable micro-controller, a pair of FET’s driving a pair of power transistors, which in turn drive the HF output transformer at around 15.6kHz. He guesses that the “original micro-controller is probably an OTP part like a 12C508” but in the absence of a chipID he couldn’t be sure.

Instead of trying to break his head over it, he just swapped in a pin-compatible PIC12F1840. All that’s left to do is to write some quick-n-dirty code and sprinkle it with funny comments in order to modulate the output signal at audio frequencies. His first choice of tune was “We are Number One” by Lazy Town, the Icelandic educational musical comedy children’s television series (phew). But redditors are awesome, and someone asked him to add the “Imperial March” and [PodeCoet] obliged.

Since he was going to gift these lighters, the sneaky hacker added a prank in the code. Every time the button is pressed for more than two seconds, it works as normally expected and a counter is incremented. On the 20th count, and for one time only, the tune is played. No amount of pressing the button will play the tune again, confounding the user to wonder if he was hallucinating. This also helps ensure the lighter does not self-destruct prematurely, since the output transformer is likely designed for low duty cycles. His blog post contains all of the information needed to do this hack along with handy tips to avoid the problems he faced. A “Happy Birthday” tune would be great when lighting some birthday candles, we think.

[PodeCoet] has a fancy for high voltage stuff – check out “Home built Stun Baton turns you into a cop from Demolition Man“. This man surely loves his pranks, as evidenced by “Hacking your Co-Workers Label Makers“. And the farce is strong in this one — “Student trolls anti-Arduino Prof with parasite MCU“.

END_OF_DOCUMENT_TOKEN_TO_BE_REPLACED

The short version of the security vulnerability is that the OWL energy monitors seem to be sending out their data to servers at OWL, and this data is then accessible over plain HTTP (not HTTPS) and with the following API: http://beta.owlintuition.com/api/electricity/history_overview.php?user=&nowl=&clientdate=. Not so bad, right? They are requiring username and password, plus the ID number of the device. Maybe someone could intercept your request and read your meter remotely, because it’s not encrypting the transaction?

Nope. Much worse. [Chet] discovered that the username and password fields appear not to be checked, and the ID number is the device’s MAC address which makes is very easy to guess at other device IDs. [Chet] tried 256 MACs out, and got 122 responses with valid data. Oh my!

Take this as a friendly reminder and a cautionary tale. If you’re running any IoT devices, it’s probably worth listening to what they’re saying and noting to whom they’re saying it, because every time you send your data off to “the cloud” you’re trusting someone else to have done their homework. It is not a given that they will have.

There was a time when electronic hackers (or hobbyist, enthusiasts, geeks, or whatever you want to be called) were better than average at geography. Probably because most of us listened to shortwave radio or even transmitted with ham radio gear. These days, if you try listening to shortwave, you have to be pretty patient. Unless you want to hear religious broadcasters or programming aimed at the third world, there’s not much broadcast traffic to listen to anymore

The reason, of course, is the Internet. But we’ve often thought that it isn’t quite the same. When you tuned in London on your homebrew regenerative receiver, you wanted to know where that voice was coming from, and you couldn’t help but learn more about the area and the people who live there. Tune into a BBC live stream on the Internet, and it might as well be any other stream or podcast from anywhere in the world.

Maybe we need to turn kids on to Radio Garden. Superficially, it isn’t a big deal. Another catalog of streaming radio stations. You can find plenty of those around. But Radio Garden has an amazing interface (and a few other unique features). That interface is a globe. You can see dots everywhere there’s a broadcast station and with a click, you are listening to that station. The static and tuning noises are a nice touch.