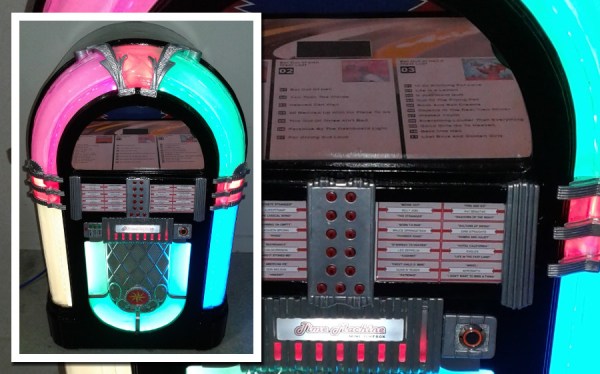 Restoring a genuine vintage jukebox is a fun project, but finding suitable candidates can be a difficult proposition. Not only can a full-size machine take a huge bite out of your wallet, it can take up a lot of room, too. So a replica miniature jukebox might be just the thing.

We have to admit, at first glance [Allan_D_Murray]’s project seemed like just another juke upgrade. It was only after diving into his very detailed build log that we realized this classic-looking juke is only about 30″ (80 cm) tall. It’s not exactly diminutive, but certainly more compact than the original Wurlitzer 1015 from which it draws its inspiration. But it sure looks like the real thing. Everything is custom made, from the round-top case to the 3D-printed trim pieces, which are painted to look like chrome-plated castings. The guts of the juke are pretty much what you’d expect these days — a PC playing MP3s. But an LCD monitor occupies the place where vinyl records would have lived in the original and displays playlists of the albums available. There’s an original-looking control panel on the front, and there are even bubblers in the lighted pilasters and arches.

Hats off to [Allan] for such a detailed and authentic tribute to a mid-century classic. But if a reproduction just won’t cut it for you, check out this full-size juke with the original electronics.

END_OF_DOCUMENT_TOKEN_TO_BE_REPLACED 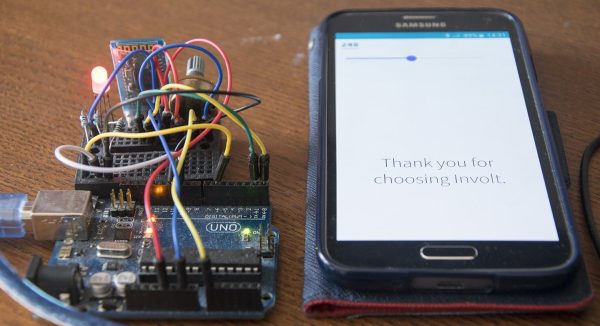 IoT, web apps, and connected devices are all becoming increasingly popular. But, the market still resembles a wild west apothecary, and no single IoT ecosystem or architecture seems to be the one bottle of snake oil we’ll all end up using. As such, we hackers are keen to build our own devices, instead of risking being locked into an IoT system that could become obsolete at any time. But, building an IoT device and interface takes a wide range of skills, and those who are lacking skill in the dark art of programming might have trouble creating a control app for their shiny new connected-thing.

Enter Involt, which is a framework for building hardware control interfaces using HTML and CSS. The framework is built on Node-Webkit, which means the conventions should be familiar to those with a bit of web development background. Hardware interactions (on Arduinos) are handled with simple CSS classes. For example, a button might contain a CSS class which changes an Arduino pin from high to low.

Involt can take that CSS and convert it into a function, which is then sent to the Arduino via serial or Bluetooth communication. For more advanced functionality, Javascript (or really any other language) can be used to define what functions are generated — and, in turn, sent to the Arduino. But, all that is needed for the basic functionality necessary for many IoT devices (which might only need to be turned on and off, or set to a certain value) is a bit of HTML and CSS knowledge. You’ll create both the interface and the underlying hardware interactions all within an HTML layout with CSS styling and functionality.

While Involt isn’t the only framework to simplify hardware interaction (it’s not even the only Node.js based method), the simplicity is definitely laudable. For those who are just getting started with these sorts of devices, Involt can absolutely make the process faster and less painful. And, even for those who are experienced in this arena, the speed and efficiency of prototyping with Involt is sure to be useful.

You can tell from looking around his workshop that [Paul Jackman] likes plywood even more than we do. And for the bases of these lamps, he sandwiches enough of the stuff together that it becomes a distinct part of the piece’s visuals. Some work with a router and some finishing, and they look great! You can watch the work, and the results, in his video embedded below.

The plywood bases also hide the electronics: a transformer and some LEDs. To make space for them in the otherwise solid blocks of wood, he tosses them in the CNC router and hollows them out. A little epoxy for the caps of the jars and the bases were finished. Fill the jars with colored glass, and a transparent tube to allow light all the way to the top, and they’re done.

END_OF_DOCUMENT_TOKEN_TO_BE_REPLACED 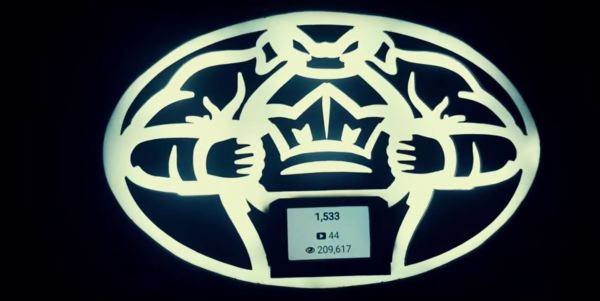 Old hardware you may have on hand cannot only inspire projects in their own right, but can facilitate the realization of any ideas you have been planning. Using a Nokia N900, [MakerMan] concocted a light-up sign with a live subscriber and view count of his videos.

[MakerMan] milled out the logo used on the sign with his DIY CNC machine — built from rotary bearings and recycled stepper motors off industrial Xerox printers. The meticulous application of a jigsaw, rotary tool, and grinder resulted in a sturdy frame for the sign while a few strips of RGB LEDs imbue it with an inspiring glow. All that was left was to mount the phone in place and tape it for good measure.

END_OF_DOCUMENT_TOKEN_TO_BE_REPLACED 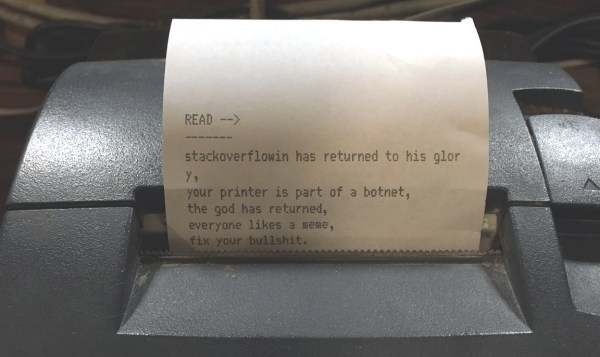 A new day dawns, and we have another story involving insecure networked devices. This time it is printers of all makes and descriptions that are causing the panic, as people are finding mystery printouts bearing messages such as this:

“Stackoverflowin has returned to his glory, your printer is part of a botnet, the god has returned“

Well that’s it then, you can’t argue with a deity, especially one who has apparently created a botnet from the world’s printing devices. Printer owners the world over are naturally worried about their unexpected arrival, and have appeared on support forums and the like to express their concern.

We are of course used to taking everything our printers tell us at face value. Low on ink? I hear you, my inanimate reprographic friend! But when our printer tells us it’s part of a botnet perhaps it’s time to have a little think. It is entirely possible that someone could assemble a botnet of compromised printers, but in this case we smell a rat. Only in farcical crime dramas do crooks announce their crimes in such a theatrical fashion, you might say it’s the point of a botnet not to be detected by its host. Reading some of the reports it seems that many of the affected systems have port 9100 open to the world, that’s the standard TCP printer port, so it seems much more likely that someone has written a little script that looks for IP addresses with port 9100 open, and trolls them with this message.

The real message here is one with which we expect Hackaday readers will be very familiar, and which we’ve covered before. Many network connected appliances have scant regard for security, and are a relative push-over for an attacker. The solution is relatively straightforward to those of a technical inclination, be aware of which services the devices is exposing, lock down services such as uPNP and close any open ports on your router. Unfortunately these steps are probably beyond many home users, whose routers remain with their default manufacturer’s settings for their entire lives. It’s a shame our printer troll didn’t add a link to basic router security tips.

If you want to have a little fun, some of the printed pages include an email address for ‘the god’. It would be fun to figure out who this is, right?