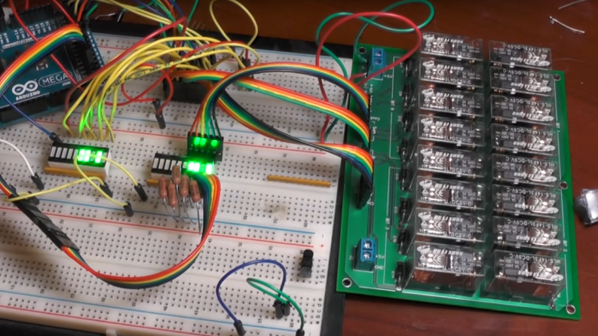 Computers built using discrete logic chips? Seen it. Computers from individual transistors? Impressive, but it’s been done. A computer built out of electromechanical relays? Bring on the ozone!

The aptly named [Clickity Clack]’s new YouTube channel promises to be very interesting if he can actually pull off a working computer using nothing but relays. But even if he doesn’t get beyond the three videos in the playlist already, the channel is definitely worth checking out. We’ve never seen a simpler, clearer explanation of binary logic, and [Clickity Clack]’s relay version of the basic logic gates is a great introduction to the concepts.

Using custom PCBs hosting banks of DPDT relays, he progresses from the basic AND and XOR gates to half adders and full adders, explaining how carry in and carry out works. Everything is modular, so four of his 4-bit adder cards eventually get together to form a 16-bit adder, which we assume will be used to build out a very noisy yet entertaining ALU. We’re looking forward to that and relay implementations of the flip-flops and other elements he’ll need for a full computer.

And pay no mind to our earlier dismissal of non-traditional computer projects. It’s worth checking out this discrete 7400 logic computer and this all-transistor build. They’re impressive too in their own way, if a bit quieter than [Clickety Clack]’s project.

END_OF_DOCUMENT_TOKEN_TO_BE_REPLACED 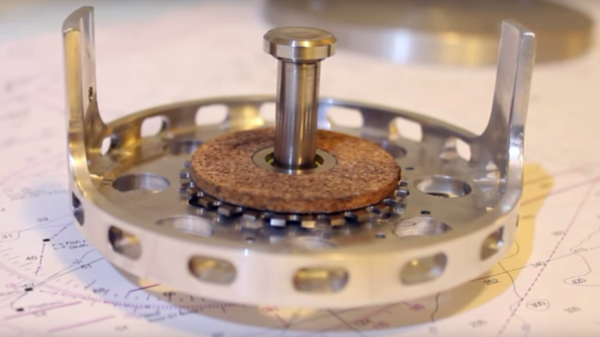 For those of us who can’t get enough vicarious machining, YouTube is becoming a gold mine. Intricate timepieces, gigantic pump shafts, and more and better machine tools are all projects that seem to pop up in our feed regularly.

With all that to choose from, can a series on building a fly fishing reel actually prove interesting? We think so, and if you enjoyed [Clickspring]’s recently completed pedestal clock, you might just get a kick out of what’s cooking in [JH Reels]’ shop. Comparing any machining videos to [Clickspring]’s probably isn’t very fair, but even with a high bar to hurdle, [JH Reels] comes out looking pretty good. The challenge here is that this is a saltwater fly reel, so extra care with material selection and machining methods ought to make for some interesting viewing. Also of interest is the range of tooling needed to produce the reel. From lathe to mill to waterjet cutter, a lot goes into these parts, and watching them come together is fascinating.

You wouldn’t think a seemingly simple mechanism like a fly reel would be so complicated to build. But there’s a lot more to it than meets the eye, and with a reel that’s clearly destined to be an heirloom piece, [JH Reels]’ attention to detail is impressive. The series currently stands at 10 videos, and we’re keen to see how it turns out.

The first video is posted below to whet your appetite. But if machining and fishing don’t do it for you, maybe you can try drones and fishing instead.

END_OF_DOCUMENT_TOKEN_TO_BE_REPLACED

It’s February, conference season hasn’t even started yet, and already there’s a winner of the best electronic badge of the year. For this year’s MAGfest, [CNLohr] and friends distributed 2,000 ESP8266-based swag badges.

These custom #badgelife badges aren’t. Apparently, MAGFest wouldn’t allow [CNLohr] to call these devices ‘badges’. Instead, these are ‘swadges’, a combination of swag and badges.  On board theses swadges is an ESP-12, a quartet of RGB LEDs, and buttons for up, down, left, right, A, B, Select, and Start. The swadge is powered by two AA batteries (sourced from Costco of all places), and by all accounts the badge was a complete success.

[CNLohr] is one of the great ESP8266 experts out there, and one of the design goals of this badge is to have all of these swadges communicate over raw WiFi frames. This turned out to be a great idea – using normal WiFi infrastructure with two thousand badges saturated the spectrum. The control system for was simply three badges, one per WiFi channel, that tells all the badges to change the color of the LEDs.

The swadge was a complete success, but with a few hundred blinkey glowey WiFi devices, you know [CNLohr] is going to come up with something cool. This time, he turned his lawn into a rave. About 175 swadges were laid out on the lawn, all controlled by a single controller swadge. The color of the LEDs on each swadge in the yard changes in response to the WiFi signal strength. By swinging the controller badge around his head, [CNLohr] turned his yard into a disco floor of swirling blinkieness. It looks awesome, although it might not visualize WiFi signals as well as some of [CNLohr]’s other ESP hacks.

This is a fantastic build and was well received by everyone at MAGFest. Be sure to check out the videos below, they truly show off the capabilities of this really cool piece of wearable hardware.

END_OF_DOCUMENT_TOKEN_TO_BE_REPLACED

What the heck is a Zooid? A Zooid is a small cylindrical robot, measuring 26 mm in diameter and 21 mm in height, weighting about 12g. Each robot is powered by a 100 mAh LiPo battery and uses motor driven wheels — and these things are snappy at a top speed of about 0.5m/s. Each Zooid is able to know if you touched it via capacitive touch sensing. It has wireless capabilities through an NRF24L01+ chip. So, what’s it for, you wonder…

One robot might not do much but the idea behind the Zooids is the introduction of swarm user interfaces, a new class of human-computer interfaces that involves multiple autonomous robots to handle both display and interaction. In a joint work between the Shape Lab at Stanford University (USA) and the Aviz team at Inria (France), researchers developed an open-source open-hardware platform for what they called “tabletop swarm interfaces”. The actual interface involves a swarm of Zooids, a radio base-station, a high-speed DLP structured light projector for optical tracking and a software framework for application development and control.

In the demonstration video we can see some examples of use of the Zooids. Could the resolution be measured as, erm, ZPI? Near the end of the demo we can see a new level of interactivity where the swarm quickly works together as a team and sort of fetch the user’s phone. Now, if they can be made to scour the house in search of our keys, that would be something…

END_OF_DOCUMENT_TOKEN_TO_BE_REPLACED

The LTC4316 is something special. It’s an I²C address translator that changes the address of a device that would otherwise conflict with another on the same I²C bus. Not a hack? Not so fast. Exactly how this chip does this trick is clever enough that I couldn’t resist giving it the post it rightfully deserves.

What’s so special? This chip translates the address on-the-fly, making it transparent to the I²C protocol. Up until this point, our best bet for resolving address collisions was to put the clashing chip on a separate I²C bus that could be selectively enabled or disabled. In that department, there’s the PCA9543 and PCA9547 demultiplexers which we’ve seen before. Both of these devices essentially act like one-way check valves. To address any devices downstream, we must first address the multiplexer and select the corresponding bus. While these chips resolve our address collision problems, and while there’s technically a way to address a very large number of devices if we’re not time-constrained, the control logic needed to address various bus depths can get clunky for nested demultiplexers.

What’s so classy about the LTC4316 is that is preservers simplicity by keeping all devices on the same bus. It prevents us from having to write a complicated software routine to address various sections of a demultiplexed I²C bus. In a nutshell, by being protocol-transparent, the LTC4316 keeps our I²C master’s control logic simple.

I mocked up a quick test setup to have a go at this chip in real life. END_OF_DOCUMENT_TOKEN_TO_BE_REPLACED

Exploiting the flexibility of plastic, a group of researchers has created a 3D printable microscope with sub-micron accuracy. By bending the supports of the microscope stage, they can manipulate a sample with surprising precision. Coupled with commonly available M3 bolts and stepper motors with gear reduction, they have reported a precision of up to 50nm in translational movement. We’ve seen functionality derived from flexibility before but not at this scale. And while it’s not a scanning electron microscope, 50nm is the size of a small virus (no, not that kind of virus).

OpenFlexure has a viewing area of 8x8x4mm, which is impressive when the supports only flex 6°. But, if 256 mm3 isn’t enough for you, fret not: the designs are all Open Source and are modeled in OpenSCAD just begging for modification. With only one file for printing, no support material, a wonderful assembly guide and a focus on PLA and ABS, OpenFlexure is clearly designed for ease of manufacturing. Optics are equally interesting. Using a Raspberry Pi Camera Module with the lens reversed, they achieve a resolution where one pixel corresponds to 120nm.

The group hopes that their microscopes will reach low-resource parts of the world, and it seem that the design has already started to spread. If you’d like to make one for yourself, you can find all the necessary files up on GitHub.