Stephen Hawking, although unable to speak himself, is immediately recognizable by his voice which is provided through a computer and a voice emulator. What may come as a surprise to some is that this voice emulator, the Emic2, has been used by many people, and is still around today and available for whatever text-to-speech projects you are working on. As a great example of this, [TegwynTwmffat] has built a weather forecasting station using an Emic2 voice module to provide audible weather alerts.

Besides the unique voice, the weather center is a high quality build on its own. An Arduino Mega 2560 equipped with a GPRS module is able to pull weather information once an hour. After the voice module was constructed (which seems like a project in itself) its relatively straightforward to pass the information from the Arduino over to the module and have it start announcing the weather. It can even be programmed to sing the weather to you!

All of the code that [TegwynTwmffat] used to build this is available on the project site if you’re curious about building your own Emic2 voice system. It’s also worth noting that GPRS is available to pretty much anyone and is a relatively simple system to start using to do things like pull weather information from, but you could also use it to roll out your own private cell phone network with the right equipment and licensing.

The availability of cheap WiFi boards like the ESP8266 and others means you can inexpensively put projects on the network. But there is still the problem of how to connect these devices to other places reliably. An Open Source project that attempts to make that whole effort point and click is Mongoose OS. The open source system works with the ESP8266, ESP32, and several other platforms. It is well integrated with Amazon’s IoT backend, but it isn’t locked to it.

Everyone wants to be your IoT broker and we see products appear (and disappear) regularly aimed at capturing that market. One common way to send and receive messages from a tiny device to a remote server is MQTT, an ISO standard made with resource-limited devices in mind. Many IoT services speak this protocol, including Amazon’s IoT offering. You can see how quick it is to flash an ESP8266 to make an Amazon IoT button in the video below. Although the video example uses Amazon, you can configure the system to talk to any public or private MQTT broker.

END_OF_DOCUMENT_TOKEN_TO_BE_REPLACED 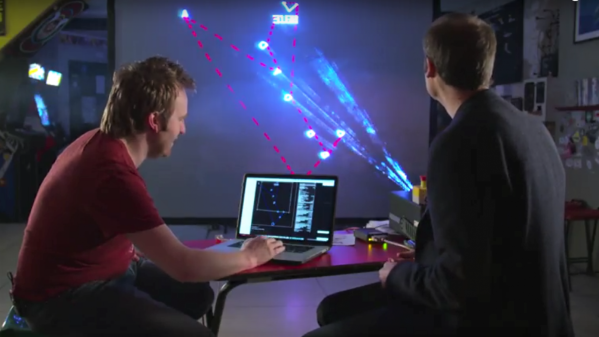 END_OF_DOCUMENT_TOKEN_TO_BE_REPLACED

If you’ve ever spent any time around a lab, you’ve doubtless seen one of those awesome combination magnetic stirrer and heater plates that scientists use to get liquids mixed and up to temperature. If you’ve ever etched your own PCBs using ammonium persulfate, you’ve experienced the need for both heating and agitation firsthand. Using a stirrer plate for PCB etching is putting two and two together and coming up with four. Which is to say, it’s a good idea that’s not amazingly novel. [acidbourbon] built his own, though, and there’s almost no part of this DIY heater/stirrer that isn’t a hack of some kind or another.

Start off with the temperature controller. Instead of buying a thermocouple or using an LM75 or similar temperature-measurement IC, [acidbourbon] uses a bog-standard 1n4148 diode. The current passed through a diode, at a given voltage, is temperature dependent, which means that adding a resistor and a microcontroller’s ADC yields a quick hacked temperature sensor. [acidbourbon] glued his straight onto the casserole that he uses as an etching tray.

Does the type of person who saves $0.25 by using a diode instead of a temperature sensor go out and buy a stirrer motor? No way. Motor and gears come from a CD-ROM drive. The “fish” — the magnetic bar that spins in the etchant — is made of neodymium magnets lengthened by heat-shrinking them together with some capacitors. Who knew that heat-shrink, fused with pliers, was waterproof? Is that a wall-wart in that box, with the prongs wired to mains electricity?

Anyway, this just goes to show that etching equipment need not be expensive or fancy. And the project also provides a showcase for a bevy of tiny little hacks. And speaking of [acidbourbon]’s projects, this semi-automatic drill press mod has been on our to-do list for two years now. Shame on us! END_OF_DOCUMENT_TOKEN_TO_BE_REPLACED 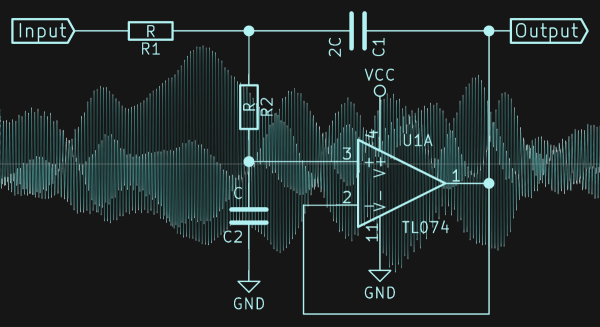 There comes a time in every electronic designer’s life when, whether they know it or not, they need an analog filter in their design. If you’re coming from a digital background, where everything is nice and numeric, the harsh reality of continuous voltages can be a bit of a shock. But if you’re taking input from, or sending output to the big analog world out there, it pays to at least think about the frequency-domain properties of the signal, and maybe even do something about them.

Designing an analog filter to fit your needs can be a bit of a daunting task: there are many factors that you’re going to need to consider, and they all interact. It’s easy to get lost. We’re going to simplify this as much as possible by instead focusing on a few common applications and building up the simplest possible filters that work well for them.

Today, we’re going to consider the lowpass filter, and specifically a Sallen-Key filter with Butterworth characteristics and a second-order rolloff. Sound like word salad? We’ll fix that up right away, because this is probably the single most important filter to have in your analog toolbox for two very common use cases: pulse-width modulated (PWM) output and analog-to-digital conversion (ADC) input.

END_OF_DOCUMENT_TOKEN_TO_BE_REPLACED

Join [Sylvia Wu], a Senior Manufacturing Engineer at Fictiv, for this week’s Hack Chat. [Sylvia’s] work at Fictiv gives her a unique viewpoint for modern manufacturing. The company connects engineers with rapid manufacturing by taking in a design and routing it to a shop that has the tools and time to fabricate the part quickly. This means seeing the same silly mistakes over and over again, but also catching the coolest new tricks as they pass by. She also spends time tearing apart consumer products to see how they have been manufactured, adding to their arsenal of available processes, both time-tested and newfangled.

Anyone interested manufacturing needs to get in on this Hack Chat. Mark your calendar for this Friday, 3/10 at noon PST (20:00 UTC)

On Friday March 17th the Hack Chat features chip design for oscilloscopes with engineers from Keysight. 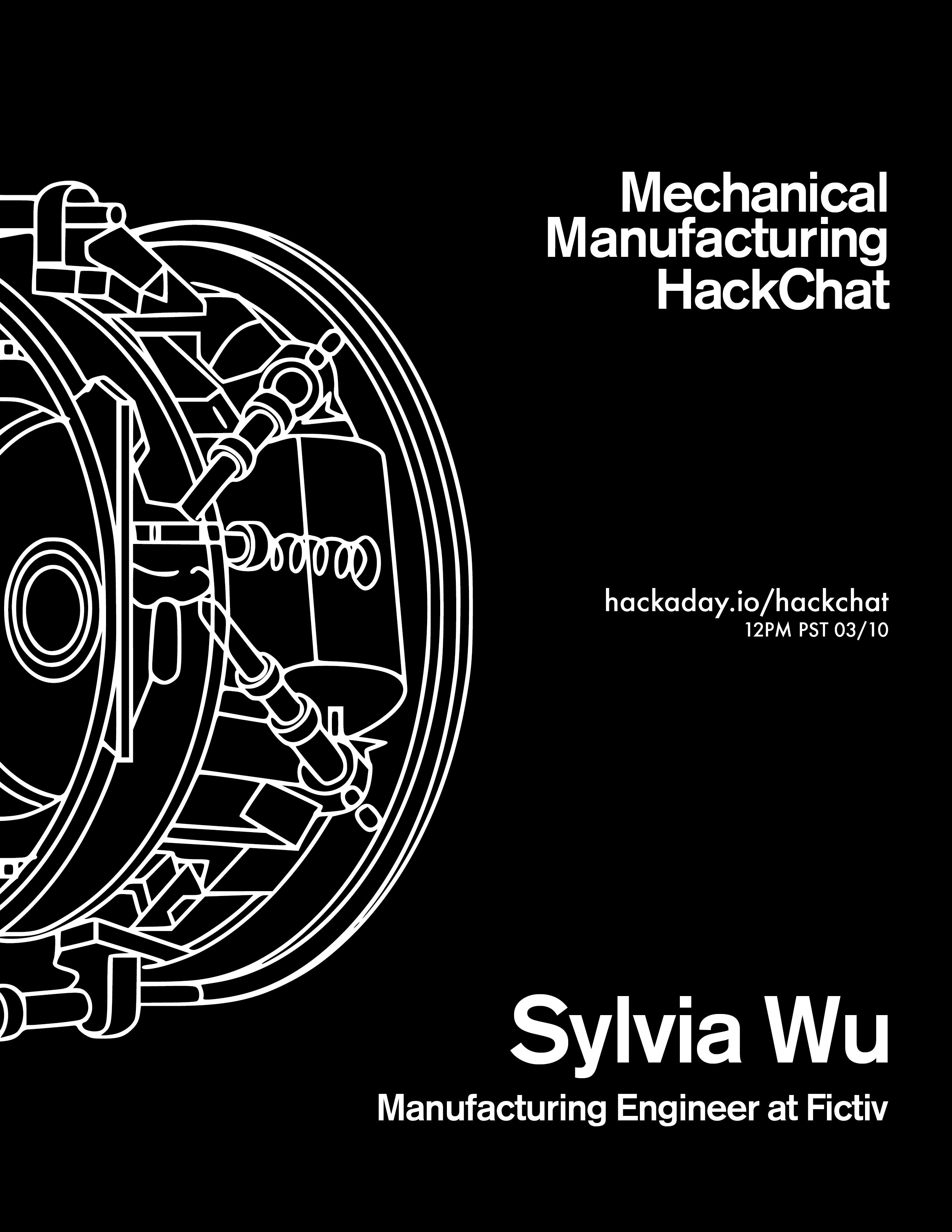