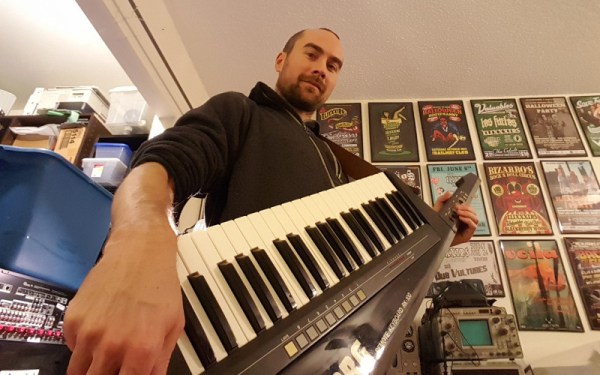 On a dreary night in November, [Smecher] collected the instruments of electronic life around him to infuse a musical spark into FrankenKorg — a resurrected keytar.

This hack is a “re-braining” of a RK-100 Korg Keytar, replacing the original circuits with an ATMega32 — the original functionality and appearance are preserved allowing any restored version of the original boards to be seamlessly re-integrated. In light of that, the original boards were ditched after a brief investigation, and a haphazard building process on a protoboard began. Three LS138 3-8 demuxers that accompany the ATMega handle scanning the keys since there weren’t enough pins on the ATMega alone for all the Korg’s features. Check out [Smecher]’s breakdown of his process in the video after the break!

END_OF_DOCUMENT_TOKEN_TO_BE_REPLACED 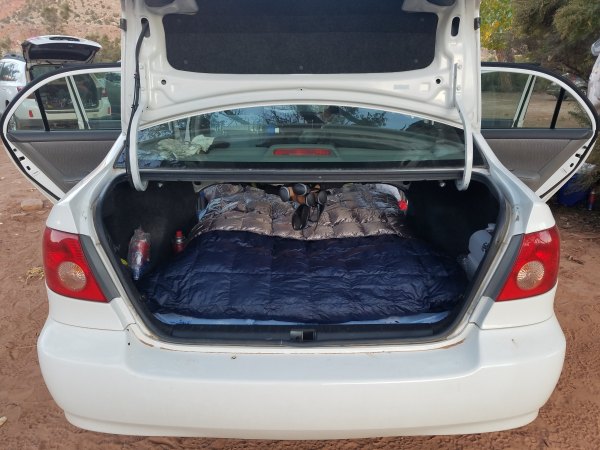 A weekend away camping in the wilds can do wonders for one’s sanity, and the joy of spending it in a recently converted camping vehicle adds to the delight. In a twist on the conventional camper, redditor [Gongfucius] and his wife have converted their 2005 Toyota Corolla into the perfect getaway vehicle for two.

To make enough room, the rear seating had to go, and removing it was deceptively easy. [Gongfucius] was able to build and fit a platform peppered with storage hatches that could snap into place and cover the trunk and backseat — covering it with felt for added comfort. A mattress was cut to size out of five inch memory foam and his wife sewed fitted coverings to them. More storage nooks in the trunk keep necessities at hand.

END_OF_DOCUMENT_TOKEN_TO_BE_REPLACED 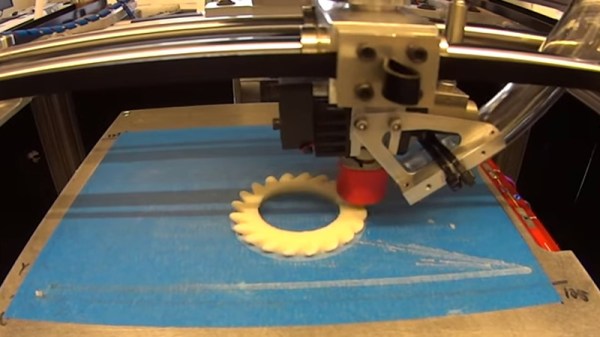 Traditional desktop 3D printing technology has effectively hit a wall. The line between a $200 and a $1000 printer is blurrier now than ever before, and there’s a fairly prevalent argument in the community that you’d be better off upgrading two cheap printers and pocketing the change than buying a single high-end printer if the final results are going to be so similar.

The reason for this is simple: physics. Current printers have essentially hit the limits of how fast the gantry can move, how fast plastic filament can pushed through the extruder, and how fast that plastic can be melted. To move forward, we’re going to need to come up with something altogether different. Recently a team from MIT has taken the first steps down that path by unveiling a fundamental rethinking of 3D printing that specifically addresses the issues currently holding all our machines back, with a claimed 10-fold increase in performance over traditional printing methods.

As anyone who’s pushed their 3D printer a bit too hard can tell you, the first thing that usually happens is the extruder begins to slip and grind the filament down. As the filament is ground down it starts depositing plastic on the hobbed gear, further reducing grip in the extruder and ultimately leading to under-extrusion or a complete print failure. To address this issue, MIT’s printer completely does away with the “pinch wheel” extruder design and replaces it with a screw mechanism that pulls special threaded filament down into the hot end. The vastly increased surface area between the filament and the extruder allows for much higher extrusion pressure.

An improved extruder doesn’t do any good if you can’t melt the incoming plastic fast enough to keep up with it, and to that end MIT has pulled out the really big guns. Between the extruder and traditional heater block, the filament passes through a gold-lined optical cavity where it is blasted with a pulse modulated 50 W laser. By closely matching the laser wavelength to the optical properties of the plastic, the beam is able to penetrate the filament and evenly bring it up to nearly the melting point. All without physically touching the filament and incurring frictional losses.

There are still technical challenges to face, but this research may well represent the shape of things to come for high-end printers. In other words, don’t expect a drop-in laser hot end replacement for your $200 printer anytime soon; the line is about to get blurry again.

Thanks to [Maave] for the tip.

END_OF_DOCUMENT_TOKEN_TO_BE_REPLACED 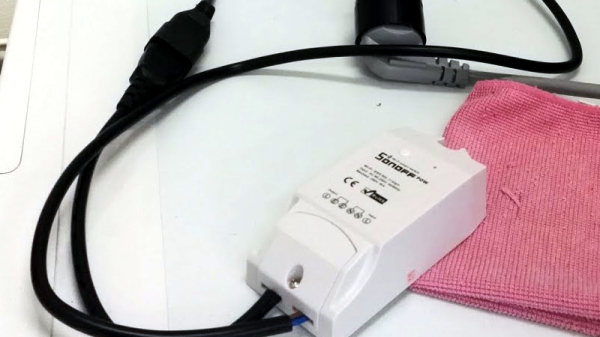 Living in a condo with inadequate opportunity for fresh light wiring presented a problem for [Raphael Luckom], which he solved by taking a few off-the-shelf ESP8266-based IoT mains switches. That in itself is nothing particularly new these days, but what makes his switches special is that when faced with fiddly soldering to reprogram them, instead he fabricated a pogo pin jig to make the required contacts.

He took inspiration for his work from a Hackaday.io project hacking some Chinese switched outlets. They contain a standard ESP-12 module, so identifying the correct pins to program them was easy enough. He simply had to create a jig for his pogo pins, which he did with his 3D printer. Of course, “simply” is not an appropriate word, because along the way he had to pass through many iterations of the print, but eventually he had his jig secured to the boards with a clamp.

The result: a successful relay, and without the tricky soldering. We know many of our readers will have no problems with a bit of solder, but for those of you that don’t there might be a bit of interest here.

We’ve shown you many ESP8266 switches over the years. This all-in-one socket system was rather clever, but we’ve had some simple switches too.

There is no question, that Santa Claus exists. He’s real, with the sleigh, the beard, and the reindeer and everything. He distributes gifts to billions of children in an evening, squeezes down a billion chimneys without getting that stylish red outfit dirty, and gets back home to the North Pole before sunrise. What more proof do you need, after all the missile defence folks track his progress over the icy wastes every Christmas Eve!

Well, the previous paragraph is the story you’ll get from the average youngster in countries where St. Nick is a cultural fixture, and who are we to disabuse them of this notion. Certainly not [Dave Barrett], who has the task of coming up with some ideas for a Santa Proof Of Existence for a kids’ Christmas party. In a previous year he’s thrilled them with a view of the sleigh taking off (in reality a remote-controlled model rocket launch complete with fake air traffic control clearance for Santa via CB radio), but this year the party isn’t somewhere with the space to do that trick. Instead he has the task of maintaining the illusion in those young minds for another year, with only a modest suburban plot in which to do it.

How would you prove Santa’s existence for the credulous young party-goers, using the finest technological marvels available to the Hackaday community? Perhaps you might create the illusion of boots crunching in the snow outside, or maybe the not-so-distant sound of reindeer. We suggest a Santa-Pede won’t cut it, and neither will hiring the beardy member of your hackspace as a stand-in. Kids aren’t that stupid!

What do you think? Go nuts in the comments.

Feeding the cat should be a moment of magic, in which you bond with your adorable pet as she rubs seductively against your ankles. As you place the saucer of tender and moist meaty chunks on the floor, she bounds the length of your kitchen, excited expression on her little kitty face, and tail in the air.

If Hackaday made television adverts for cat food, we’d have it nailed. But our everyday reality involves the cute-as-heck Hackaday moggy turning into a persistent little pest when she decides it’s feeding time. [ThinkSilicon]’s friends had exactly this problem, with their furry friend’s preferred timing coming early in the morning. His solution? An automated cat feeder (translated) that dispenses kibbles from a hopper into the lucky mouser’s feeding dish.

The mechanical part of this endeavour is pretty straightforward, a servo moves a sliding piece of plywood with a hole cut in it across the bottom of a hopper full of cat food. Move the slide, dispense food down a chute to the waiting happy cat. Behind the scenes is an ESP8266 and a NodeMCU web service, through which feeding time can be either scheduled, or dispensed at will.

A happy cat means a happy owner, especially in the very early morning. Until that is the newly-sated creature decides to spread the love, jumping onto the owner’s bed in thanks and breathing cat-food-breath into their face. You really do have to love ’em!

We’ve shown you many cat food related projects in the past, including this Arduino take on the same idea. But why take the effort to trigger it yourself, when the cat can do it for you.