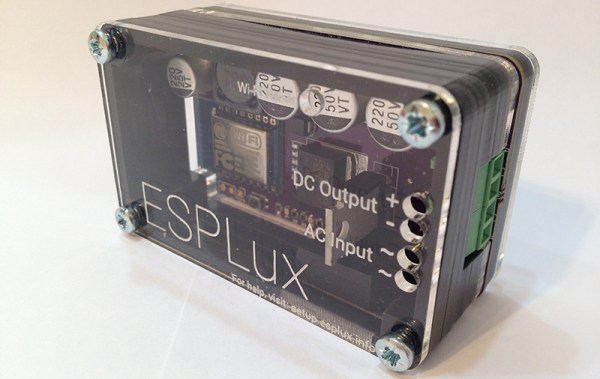 A common theme around Internet of Things things is connecting a relay to the web. It’s useful for everything from turning on a lamp from across the country to making sure your refrigerator is still running without the twice-hourly calls from the International Refrigeration Commission. For his Hackaday Prize project, [Matt] is turning lights on and off with an ESP8266 WiFi module, but not just any lights: he’s focusing on low-voltage lighting with the ESPLux.

Most downlights and landscape lights run off a 12 or 24 V transformer, and because [Matt] wanted to add dimming to his lighting box, he’s rectifying the low voltage AC to DC; PWMing an output to light an LED is a much better idea than chopping AC with a triac.

With a rectifier, MOSFET, and an ESP8266, the ESPLux is a simple build, but the project doesn’t end with electronics. for automation and control of these lights, [Matt] is turning to OpenHAB, automation software that works with everything you would ever use to make your home smart. 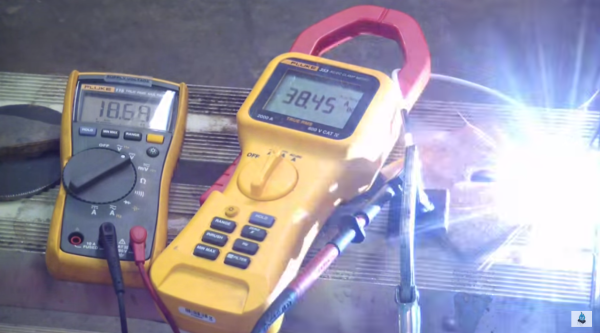 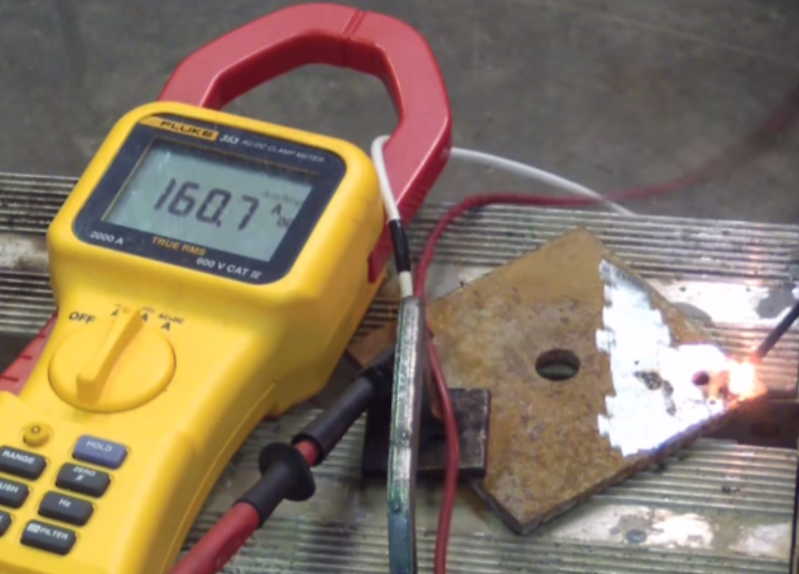 END_OF_DOCUMENT_TOKEN_TO_BE_REPLACED

This video from [Just Think] caught our attention for open-flame testing of 6 different commonly used liquid fuels: Jet-A, diesel, heating oil, kerosene, avgas (100LL), and gasoline (or petrol, for our international readers). We love his low-tech approach to testing – just some mason jars and a back yard. The results are quite interesting.

He starts with testing Jet-A fuel. Yep, the same stuff you’d fill up your Boeing 737 with. We flinched for a second as he drops a match into it – then nothing happened. It’s a common misconception that jet fuel will sustain a flame by its self. It needs to be atomized to burn, as he shows in the video. He moves on to test both diesel and heating oil – making note that both are exactly same, except for color. Heating oil has a red dye added to it, to mark it “not for sale” for cars and trucks, as it’s not taxed. Neither would keep a flame.

Next up is kerosene, and it would just barely keep a flame. kerosene is commonly used as a replacement for diesel in extremely cold climates, were diesel fuel would gel and clog fuel systems. Finally, he tests avgas and gasoline. Both would sustain a flame quite well.

We think this small experiment is interesting, in that the results are kind of counter-intuitive. All these different fuels are used in different applications because of their different properties, and of course there is some really interesting science behind that, if you want to learn more.

We don’t need to tell you to be safe when working with fuels. Even though something like Jet-A fuel won’t carry a flame in a container on its own, doesn’t mean that it won’t burn aggressively when combined with other things (like clothing) and in other situations. So we’re filing this one under “don’t try this at home” – instead, sit back and enjoy the YouTube video after the break.

END_OF_DOCUMENT_TOKEN_TO_BE_REPLACED 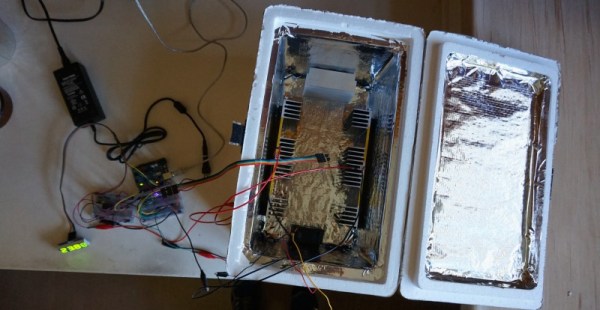 The [Pelling Lab] have been iterating over their DIY CO2 incubator for a while now, and it looks like there’s a new version in the works. 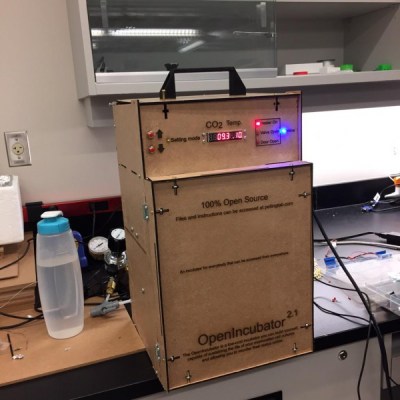 We’ve covered open source Biolab equipment before including incubators but not a CO2 incubator. Incubators allow you to control the temperature and atmosphere in a chamber. The incubator built by the [Pelling Lab] regulates the chambers temperature and CO2 levels allowing them to culture cells under optimal conditions.

While commercial incubators can cost thousands of dollars the [Pelling Lab] used a Styrofoam box, space blanket, and SodaStream tank among other low cost parts. The most expensive component was a CO2 sensor which cost $230. The rig uses an Arduino for feedback and control. With a total BOM cost of $350 their solution is cost effective, and provides an open platform for further development.

The original write up is full of useful information, but recent tweets suggest a new and improved version is on the way and we look forward to hearing more about this exciting DIYBio project!

[ZPriddy] chose to implement a simple web server using Flask. The web server listens for the Amazon requests and responds appropriately. It also Oauth2 authentication to ensure some level of security. The server is capable of synchronizing the temperature of multiple Nest devices in the same home, but it can also increment or increment the temperature across the board. This is accomplished with some simple voice commands such as “Tell Nest that I’m a little bit chilly”. If you like Amazon Echo hacks, be sure to check out this other one for controlling WeMo devices. END_OF_DOCUMENT_TOKEN_TO_BE_REPLACED

Restoring old gear often means replacing unavailable parts with modern equivalents. [Alex Eisenhut] needed to replace some old TO-3 voltage regulators and decided to make an authentic-looking switching power supply replacement. These three pin metal cans were very common, especially the LM340 5V regulator which was, of course, a linear regulator. Today, you are more likely to see a 7805 in a TO-220 case or something surface mount for a comparable linear regulator.

As you might expect, the board uses surface mount components. [Alex] used Mill Max machine pins to match the original regulator footprint and calls the regulator Ton3y. He plans to cover it up with a 3D printed lid, but it seems a shame to hide the fine PCB work.

In the pictures, you can see that the machine pins are a tight fit. [Alex] used a hammer to lightly tap them into place. Of course, the original TO-3 regulators were linear and would generate a lot of heat. The Ton3y, as you’d expect from a switching power supply, runs cool (according to the scientific measurement made with [Alex]’s pinky finger) and surely has a wider input voltage range and more output current capacity.

We’ve seen replacement switching regulators before, but this one is really a work of art.

People may know many name and brands of cars and trucks, and there’s tons of scale models available for the average popular ones. What happens if your favorite truck is a 1960 Bucegi? You could do what [Arin] did and 3D print your own custom model.

[Arin] used to drive these machine back in his youth and it made an impression on him. In the few years of production, the 140HP V8 truck was adapted to all sorts of uses from farm trucks to military vehicles and even cranes.  The base truck and the desired configuration is modeled up in quite a bit of detail, then it’s 3D printed.

Once the printing is done the models are smoothed out using body filling primer paint, (and we imagine some fine sanding) , painted with acrylic paint, and assembled into an accurate model complete with working steering systems.