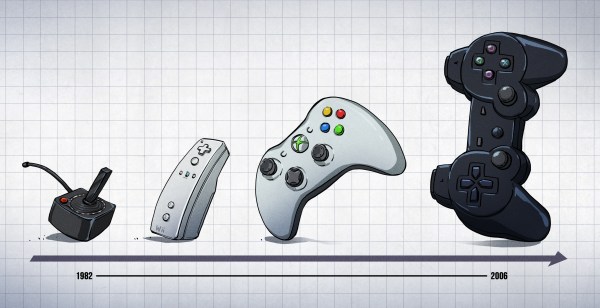 The story goes that Atari was developing a premium model of their popular home video game console, the Atari 2600, for the 1981 fiscal year. Internally known as the Stella RC, this model revision promised touch sensitive game selection toggles, LED indicators, and onboard storage for the controllers. The focus of the project, however, was the “RC” in Stella RC which stood for remote control. Atari engineers wanted to free players from the constraints of the wires that fettered them to their televisions.

Problem with the prototypes was that the RF transmitters in the controllers were powerful enough to send a signal over a 1000 ft. radius, and they interfered with a number of the remote garage door openers on the market. Not to mention that if there were another Stella RC console on the same channel in an apartment building, or simply across the street, you could be playing somebody else’s Pitfall run. The mounting tower of challenges to making a product that the FCC would stamp their approval on were too great. So Atari decided to abandon the pioneering Stella RC project. Physical proof of the first wireless game controllers would have been eliminated at that point if it were created by any other company… but prototypes mysteriously left the office in some peculiar ways.

“Atari had abandoned the project at the time…[an Atari engineer] thought it would be a great idea to give his girlfriend’s son a videogame system to play with…I can’t [comment] about the relationship itself or what happened after 1981, but that’s how this system left Atari…and why it still exists today.”

Atari did eventually get around to releasing some wireless RF 2600 joysticks that the FCC would approve. A couple years after abandoning the Stella RC project they released the Atari 2600 Remote Control Joysticks at a $69.95 MSRP (roughly $180 adjusted for inflation). The gigantic price tag mixed with the video game market “dropping off the cliff” in 1983 saw few ever getting to know the bliss of wire-free video game action. It was obvious that RF game controllers were simply ahead of their time, but there had to be cheaper alternatives on the horizon.

Out of Sight, Out of Control with IR Schemes

Video games were a dirty word in America in 1985. While games themselves were still happening on the microcomputer platforms, the home console business was virtually non-existent. Over in Japan, Nintendo was raking in money hand over fist selling video games on their Famicom console. They sought to replicate that success in North America by introducing a revised model of the Famicom, but it had to impress the tech journos that would be attending its reveal at the Consumer Electronics Show (CES).

The prototype system was called the Nintendo Advanced Video System (AVS). It would feature a keyboard, a cassette tape drive, and most importantly two wireless controllers. The controllers used infrared (IR) communication and the receiver was built-into the console deck itself. Each controller featured a square metallic directional pad and four action buttons that gave the impression of brushed aluminum. The advancement in video game controller technology was too good to be true though, because the entire system received a makeover before releasing as the Nintendo Entertainment System (NES) that Christmas. The NES lacked the keyboard, the tape drive, and the IR controllers and its change in materials hardly captured the high-end flash of the AVS. The removal of IR meant the device was cheaper to manufacture. A decision that ultimately helped the NES to become a breakout success that in turn brought back dedicated video game consoles single-handedly.

END_OF_DOCUMENT_TOKEN_TO_BE_REPLACED To get this working, you will need the USB Host Shield for the Arduino and a Bluetooth dongle. Once you have the hardware setup, you can use the library to pair with the controller. When connected, simple function calls will let you read the state of the device.

While this does require some additional hardware to connect, all of the code is open source. If you’re looking to experiment with the PS4 controller yourself, [Kristian]’s work could be a helpful starting point. Of course, all of the source is available on Github, and the example sketch shows how easy it is to roll the PS4 controller into your own Arduino project. This gaming cabinet lets two players select games from a wide array of consoles and play them using the original controllers. [Patrice] built it around his Multi Video Games System 2, which converts each of the 75 controllers to a common format. Players pick controllers from the display case, plug in an  HD-15 connector, and choose the game they want to play. The cabinet contains a PC that runs a variety of emulators, and uses HyperSpin as a menu system.

Using adapters, the converted controllers can also be used on other game systems, tablets, or smartphones. [Patrice] claims that they’ll work across 110 different game systems. A full list of the controllers and systems is shown here.

END_OF_DOCUMENT_TOKEN_TO_BE_REPLACED If you want to mess around with your Xbox 360 controllers on a computer Microsoft would be happy to sell you a USB dongle to do so. But [Tino] went a different route. The board that drives the Xbox 360’s status light ring also includes the RF module that wirelessly connects the controllers. He wired this up to his Raspberry Pi using the GPIO header.

The module connects via an internal cable and is treated much like a USB device by the Xbox motherboard. The problem is that it won’t actually handle the 5V rail found on a USB connector; it wants 3.3V. But this is no problem for the RPi’s pin header. Once a few connections have been made the lights are controlled via  I2C and [Tino] posted some example code up on Github to work with the RF module. He plans to post a follow-up that interfaces the module with a simple microcontroller rather than an RPi board. If you can’t wait for that we’re sure you can figure out the details you need by digging through his example code. Using our hands to manipulate game controllers is something most of us take for granted. However for quadriplegics, whose arms and legs are completely paralyzed, gaming becomes a nearly impossible task. One man has spent the last 30 years of his life trying to help quadriplegics once again “pick up” the controller and enjoy a few rounds of their favorite video games.

Retired aerospace engineer [Ken Yankelevitz] has been using his skills to create game controllers that can be easily used by disabled gamers, offering them for sale at cost. Starting with Atari joysticks in 1981, he has been perfecting his craft over the years, creating some 800 mouth-operated game controllers. As the systems and their controllers became more complex, so did [Ken’s] designs. His new Xbox and Playstation controllers use all manner of components, including sip-puff tubes and lip-activated buttons in order to allow users to access every single controller function.

Even as he approaches his 70th birthday, he is busy making controllers, though at a slower pace than he has in the past. He has said that he will continue making them for as long as he can, but at some point he will have to close up shop. This has disabled gamers worried that they may no longer have someone to turn to for custom controllers, though we hope someone steps in to fill the gap whenever that day comes.

Be sure to check out his site to take a look at his designs, what he has done for the disabled community is amazing. [Mr.X] added support for four controllers to his Super Nintendo (Google translated) by internalizing the multi-player adapter. In the video after the break you’ll notice that he also added some bling to the case by positioning the power LED beneath the logo and adding a two-digit display. There is a switch on the back that allows him to choose PAL or NTSC standards with the current setting shown on that display. While most people are going with emulators, [Mr.X] ended up with a custom piece of hardware with a clean finish.

END_OF_DOCUMENT_TOKEN_TO_BE_REPLACED

[F00 f00] of Acidmods was not satisfied with his first-person shooter gaming experience, so he modded an Xbox 360 controller so that A, B, X and Y buttons are on the underside of the controller, on the inside edges of the wings where the player’s fingertips usually go. He also moved the right thumbstick up a bit so that it would be level with the left one. He designed it to improve his ability to play first person shooters, but the advantages go beyond one genre of game. The right thumb is free to remain on the right thumbstick, and the colored buttons can be pressed by four fingers instead of just the right thumb. We love this mod for it’s simplicity and effectiveness, and we’re eagerly awaiting the internal photos he promised.