Typically when we select a project for “Fail to the Week” honors, it’s because something went wrong with the technology of the project. But the tech of [Leo Fernekes]’ innovative LED sign system was never the problem; it was the realities of scaling up to production as well as the broken patent process that put a nail in this promising project’s coffin, which [Leo] sums up succinctly as “The Inventor’s Paradox” in the video below.

The idea [Leo] had a few years back was pretty smart. He noticed that there was no middle ground between cheap, pre-made LED signs and expensive programmable signboards, so he sought to fill the gap. The result was an ingenious “LED pin”, a tiny module with an RGB LED and a microcontroller along with a small number of support components. The big idea is that each pin would store its own part of a display-wide animation in flash memory. Each pin has two terminals that connect to metal cladding on either side of the board they attach to. These two conductors supply not only power but synchronization for all the pins with a low-frequency square wave. [Leo]’s method for programming the animations — using a light sensor on each pin to receive signals from a video projector — is perhaps even more ingenious than the pins themselves.

[Leo]’s idea seemed destined for greatness, but alas, the cruel realities of scaling up struck hard. Each prototype pin had a low part count, but to be manufactured economically, the entire BOM would have to be reduced to almost nothing. That means an ASIC, but the time and expense involved in tooling up for that were too much to bear. [Leo] has nothing good to say about the patent game, either, which his business partners in this venture insisted on playing. There’s plenty of detail in the video, but he sums it up with a pithy proclamation: “Patents suck.”

Watching this video, it’s hard not to feel sorry for [Leo] for all the time he spent getting the tech right only to have no feasible way to get a return on that investment. It’s a sobering tale for those of us who fancy ourselves to be inventors, and a cautionary tale about the perils of participating in a patent system that clearly operates for the benefit of the corporations rather than the solo inventor. It’s not impossible to win at this game, as our own [Bob Baddeley] shows us, but it is easy to fail.

END_OF_DOCUMENT_TOKEN_TO_BE_REPLACED

Join us Wednesday at noon Pacific time for the Marketing and Selling Hardware Hack Chat with Shawn Hymel! 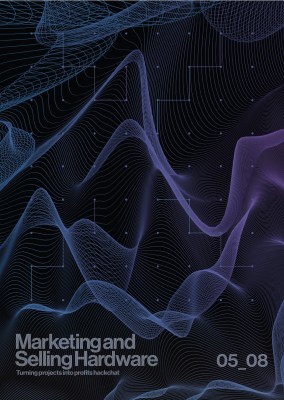 It may not be every hardware hacker’s dream, but a fair number of us harbor fantasies of thinking up the Next Big Thing and kissing the day job goodbye forever. It’s an understandable dream and a laudable goal, but as they say, a goal is a dream with a plan and a deadline. What’s your plan for turning your project into a marketable product? Chances are good you don’t have one, and if you ever expect to get to your goal you’re going to need one.

Shawn Hymel is an engineer who led several marketing campaigns for Spark Fun and recently shared his thoughts on marketing with attendees of the first-ever KiCon conference in Chicago. He’ll be dropping by the Hack Chat to talk about everything you ever wanted to know about marketing your hardware projects but were afraid to ask.

Our Hack Chats are live community events in the Hackaday.io Hack Chat group messaging. This week we’ll be sitting down on Wednesday, May 8 at noon Pacific time. If time zones have got you down, we have a handy time zone converter.

END_OF_DOCUMENT_TOKEN_TO_BE_REPLACED

Formlabs makes a pretty dang good SLA printer by all accounts. Though a bit premium in the pricing when compared to the more humble impact of FDM printers on the wallet, there’s a bit more to an SLA printer. The reasoning becomes a bit more obvious when reading through this two part series on the design and testing of the Form 2.

It was interesting to see what tests they thought were necessary to ensure the reliable operation of the machine. For example the beam profile of every single laser that goes into a printer is tested to have the correctly shaped spot. We also thought the Talcum powder test was pretty crazy. They left a printer inside a sandblast cabinet and blasted it with Talcum powder to see if dust ingress could cause the printer to fail; it didn’t.

The prototyping section was a good read. Formlabs was praised early on for the professional appearance of their printers. It was interesting to see how they went from a sort of hacky looking monstrosity to the final look. They started by giving each engineer a Form 1 and telling them to modify it in whatever way they thought would produce a better layer separation mechanism. Once they settled on one they liked they figured out how much space they’d need to hold all the new mechanics and electronics. After that it was up to the industrial designer to come up with a look that worked.

They’re promising a third part of the series covering how the feedback from beta testing was directed back into the engineering process. All in all the Form 2 ended up being quite a good printer and the reviews have been positive. The resin from Formlab is a little expensive, but unlike others they still allow users to put the printer in open mode and use other resin if they’d like. It was cool to see their engineering process.

This planned obsolescence didn’t jive with [JM] when his Tile stopped being discoverable. He didn’t want to toss a gadget that had served him so well into the landfill. So, like any good hacker, he cracked its plastic case open.

The Tile itself is a really interesting product. The largest component is the battery which has tabs spot-welded to its surface. Attached to those is a well laid out board. [JM] points out the clever use of spring contacts to engage the piezo element for the speaker as a nice example of good design for manufacture.

The hack itself was pretty easy to complete. Some electrical tape and soldering was all it took to embed the tile into the remote. Now he can take out his phone and press a button to hear a forlorn beep coming from under the couch cushions.