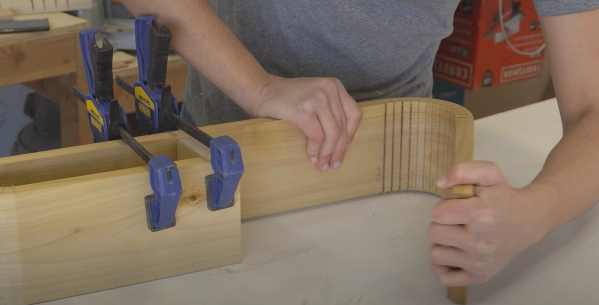 END_OF_DOCUMENT_TOKEN_TO_BE_REPLACED

A few weeks ago, the popcorn overflowed because of an ambiguous tweet from Adafruit. Did Adafruit just buy Radio Shack? While everyone else was foaming at the mouth, we called it unlikely. The smart money is that Adafruit just bought a few fancy stock certificates, incorporation papers, and other official-looking documents at the Radio Shack corporate auction a few months ago. They also didn’t pick up that monster cache of Trash-80s, but I digress.

Here’s some more popcorn: Adafruit just applied for the ‘Radiofruit’ trademark. Is this Adafruit’s play to take over the Radio Shack brand? Probably not; they put a bunch of radio modules on Feather boards, and are just doing what they do. It does demonstrate Adafruit’s  effective use of social media, though.

In a video making the meme rounds, someone found an easter egg in the gauge cluster of a Russian GAZ van. It plays Tetris.

It’s Sunday, so it’s time to talk Star Trek. Here’s something interesting that hit my email: a press release telling me, “Trekkies Scramble To Get The First Toothbrush In Space As Seen On Star Trek Discovery”. This is the toothbrush, and here is the press kit. Dumb? Not at all. Star Trek has a long history of using off-the-shelf tools and devices for props. For example, the hyperspanners seen in Star Trek: Enterprise were actually this non-contact thermometer available from Harbor Freight. At least the hyperspanners and thermometers came out of the same injection mold.

There’s a new LimeSDR board on CrowdSupply. It extends any LimeSDR to 10 GHz.

Kerf bending is the application of (usually laser-cut) slots to bend plywood around corners. You’ve seen it a million times before, and done correctly the technique can produce some very interesting results. What about metal, though? You need a pretty big laser for that. [Proto G] is using a 2000 W fiber laser to experiment with kerf bending in stainless steel. It works as you would expect, and we eagerly await someone to replicate this, if only to see another 2000 Watt laser in action. 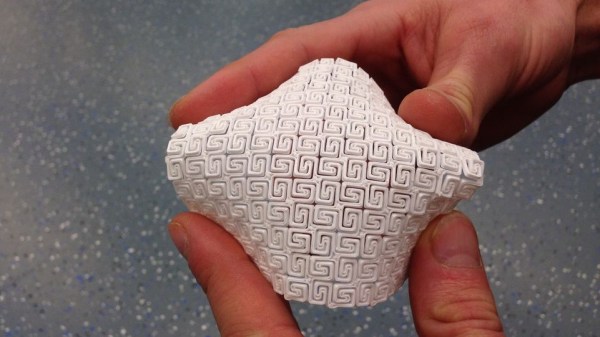 Here’s some interesting work shared by [Ben Kromhout] and [Lukas Lambrichts] on making flexible 3D prints, but not by using flexible filament. After seeing a project where a sheet of plywood was rendered pliable by cutting a pattern out of it – essentially turning the material into a giant kerf bend – they got interested in whether one could 3D print such a thing directly.

The original project used plywood and a laser cutter and went through many iterations before settling on a rectangular spiral pattern. The results were striking, but the details regarding why the chosen pattern was best were unclear. [Ben] and [Lukas] were interested not just in whether a 3D printer could be used to get a similar result, but also wanted to find out what factors separated success from failure when doing so.

After converting the original project’s rectangular spiral pattern into a 3D model, a quick proof-of-concept showed that three things influenced the flexibility of the end result: the scale of the pattern, the size of the open spaces, and the thickness of the print itself. Early results indicated that the size of the open spaces between the solid elements of the pattern was one of the most important factors; the larger the spacing the better the flexibility. A smaller and denser pattern also helps flexibility, but when 3D printing there is a limit to how small features can be made. If the scale of the pattern is reduced too much, open spaces tend to bridge which is counter-productive.

Kerf bending with laser-cut materials gets some clever results, and it’s interesting to see evidence that the method could cross over to 3D printing, at least in concept.

Back in 2014 [Johan] decided to celebrate BASIC’s  50 year anniversary by writing his own BASIC interpreter. Now, a few years later, he says he feels he has hit a certain milestone: he can play Flappy Bird, written in his own version of BASIC, running on his own home-built computer, the BASIC-1.

Inside the BASIC-1 is an Atmel XMega128A4, a keyboard from a broken Commodore 64, a joystick port, a serial to TV out adapter, and an SD card adapter for program storage. An attractively laser-cut enclosure with kerf bends houses the keyboard and hardware. The BASIC-1 boots into BASIC just like many of its home computer counterparts from the 80s.

END_OF_DOCUMENT_TOKEN_TO_BE_REPLACED

Our old pal [Jeremy Cook] is doing his own remix of [Theo Jansen]’s Strandbeest, and like the original, he’s using PVC pipe. Unlike the originals, he’s powering it with motors, not wind, and this has caused a few problems in transmitting mechanical power through a piece of PVC. Nothing is perfect, and in a few points in the legs movement the shaft shakes violently. One motor was lost and another nearly so before [Jeremy] came up with a flex coupler made from PVC.

The technique [Jeremy] is using has seen a lot of use with people building laser cut enclosures. It’s called kerf bending, and it works simply by cutting a few slits in a panel that allow it to bend slightly. This technique was replicated by [Jeremy] on a miter saw, cutting eight slots halfway through a one inch PVC pipe, with each successive cut offset 90 degrees.

The new design works well for transmitting power, and he’s not ruining motors any more. Check out the video below.

END_OF_DOCUMENT_TOKEN_TO_BE_REPLACED

We’re all familiar with the MakerSlide, right? The linear bearing system that has been turned into everything from motorized camera mounts to 3D printers is apparently very hard to source in Europe. A few folks from the ShapeOko forum have teamed up to produce the MakerSlide in the UK. They’re running a crowdsourced project on Ulule, and the prices for the rewards seem very reasonable; €65/£73 for enough extrusion, v-wheels, and spacers to make an awesome CNC router.

A few days ago, I made an offhand remark asking for an engineering analysis of kerf bending. [Patrick Fenner] of the Liverpool hackerspace DoES already had a blog post covering this, and goes over the theory, equations, and practical examples of bending acrylic with a laser cutter. Thanks for finding this [Adrian].

[Dave Langkamp] got his hands on a Makerbot Replicator, one thing led to another, and now he has a 1/6 scale model electric car made nearly entirely out of 3D printed parts. No, the batteries don’t hold a charge, and the motor doesn’t have any metal in it, but we’ve got to admire the dedication that went in to this project.

If you’ve ever tried to demonstrate the size of an object with a photograph, you’ve probably placed a coin of other standard object in the frame. Here’s something a little more useful created by [Phil]. His International Object Sizing Tool is the size of a credit card, has inch and cm markings, as well as pictures of a US quarter, a British pound coin, and a one Euro coin. If you want to print one-off for yourself, here’s the PDF.

Want some documentation on your TV tuner SDR?

The full documentation for the E4000/RTL2832U chipset found in those USB TV tuner dongles is up on reddit. Even though these chips are now out of production (if you haven’t bought a proper tuner dongle yet, you might want to…), maybe a someone looking to replicate this really cool device will find it useful.

With laser cutters popping up in hackerspaces and maker’s tool sheds like weeds, it’s no surprise we’re seeing an explosion in manufacturing techniques that would be nearly impossible without a laser cutter. One of these techniques is kerf bending, a method of bending plywood simply by burning patterns along the desired bend. [Martin] just put up a great tutorial on kerf bending with a laser cutter, and even came up with a few very interesting patterns that can be used to build your own case with rounded corners.

[Martin]’s adventures into kerf bending began with a small radio transmitter case he built. This case used the very common ‘vertical slit’ method, but in the first version of the case, the slits were placed too far apart. By moving the slits closer together, [Martin] was left with a very easy to bend and very strong wooden case.

There are also a few other patterns [Martin] tried out. A herringbone pattern made for a wooden case nearly as bendable (and a little stronger) as the traditional vertical slit method. From there, [Martin] branched out into more esoteric patterns such as a medieval cross and Space Invader pattern, both ideal for your next highly stylized enclosure.

In the end, [Martin] says just about any pattern will work for kerf bending, so long as the design isn’t diagonal to the bend. We’d love to see some proper engineering analysis for kerf bending, so if you can figure out the optimal pattern for high strength, low machine time bends, send it in on the tip line.