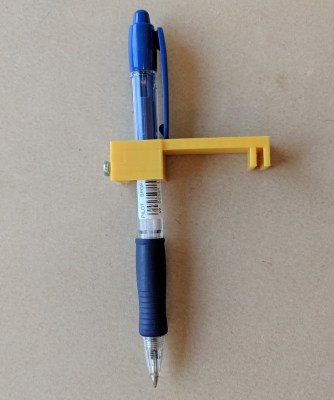 END_OF_DOCUMENT_TOKEN_TO_BE_REPLACED

“Ugh. You mean I have to press down on the pen’s button to open it? Gross.” In this day-and-age when we can swipe on our phones and do voice recognition, there seems no reason we should have to press a button. How antiquated. So [Marek Baczynski] modernized his pen for swiping and voice control. It’s also sure to get all the kids back to working on their penmanship.

Seriously though, not all hacks have to be serious. [Marek] and [Ghlargh] added a servo to activate the button, and then [Marek] added Bluetooth to control the servo. After writing a phone app, he was able to swipe down to open it and down again to close it. Then, after some prompting from Redditers he added voice control from his laptop. We think he could have done a more professional job with the way he attached the pen to the laptop, perhaps he could have 3D printed something instead of just using tape, or maybe made something using CNC or a laser cutter. An important hack such as this deserves as much. Now he need only say “Computer. Open pen.” and the tedious task is taken care of. Seeing is believing so check it out in the video below.

END_OF_DOCUMENT_TOKEN_TO_BE_REPLACED

We’ve never seen someone build a plotter out of buzzwords, but [roxen] did a really good job of it. The idea is simple, place the plotter over a sheet of paper, open a website, draw, and watch the plotter go. Check out the video below the break.

The user draws in an HTML5 Canvas object which is read by a Java Web Server. From there it gets converted to serial commands for an Arduino which controls the steppers with two EasyDrivers.

The build itself is really nice. It perfectly meets the mechanical requirements of a pen plotter without a lot of fluff. The overall frame is T-shaped, for the x- and y-axis. The movements are produced by two steppers and acetal rack and pinion sets. The pen is lifted up and down by a hobby servo.

END_OF_DOCUMENT_TOKEN_TO_BE_REPLACED

No offense to [Douglas Engelbart] but the computer mouse has always seemed a bit of a hack to us (and not in the good sense of the word). Sure we’ve all gotten used to them, but unlike a computer keyboard, there is no pre-computer analog to a mouse. There are plenty of alternatives, of course, like touchpads and trackballs, but they never seem to catch on to the extent that the plain old mouse has.

One interesting variation is the pen mouse. These do rely on a pre-computer analog: a pen or pencil. You can buy them already made (and they are surprisingly inexpensive), but what fun is that? [MikB] wanted one and decided to build it instead of buying it.

The main parts of the pen mouse include a cheap mouse with a failing scroll wheel, a bingo pen, and the base from an old web camera. There’s also a normal-sized pen to act as the handpiece. The project is mostly mechanical rather than electrical. [MikB] took the mouse apart and cut the PCB to fit inside the base. The rest of the build is a construction project.

The result appears to work well. [MikB] includes instructions for installing the mouse correctly in Linux. The net effect is like a tablet but doesn’t’ require much space on your desk. We’ve seen plenty of mouse projects in the past, of course. We’ve even seen hacks for a head mouse if that’s your thing.

3D printers are ubiquitous now, but they’re still prohibitively expensive for some people. Some printers cost thousands, but even more inexpensive options aren’t exactly cheap. [Daniel] decided that this was unacceptable, and set out to make a basic 3D printer for under $100 by including only the bare essentials needed for creating anything out of melted plastic.

[Daniel] does note that this is a design that’s relatively limited in terms of print size and resolution, but for the price it can’t be beat. If you’re interested in getting started with 3D printing, a setup like this would be perfect. 3D pens are a pretty new idea too, and it’s interesting to see them used in different ways like this.

END_OF_DOCUMENT_TOKEN_TO_BE_REPLACED