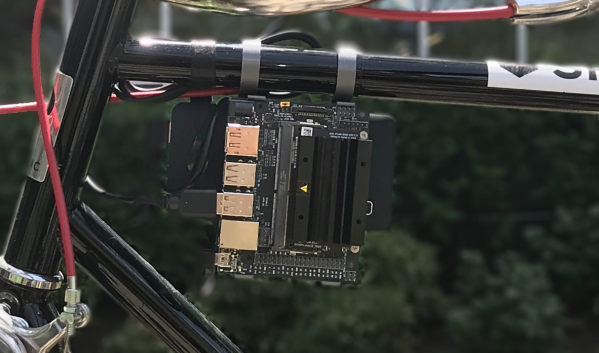 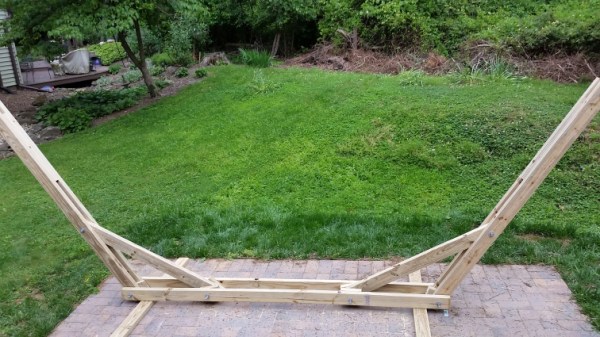 [Blake Schreurs] found himself in dire straights — there was a critical lack of available hammocks in his immediate vicinity, and he wanted one. Fast. So he built a hammock stand in half an afternoon.

Initially dismayed by the cost of store-bought models, [Schreurs]’ hammock stand is perfect for woodworking-newbies and yard-loungers on a budget alike, as the build requires only a few straight cuts and some basic tools to whip up.

After cutting and laying out the lumber to make sure that it will all fit together as intended, [Schreurs] aligned and drilled holes through the pieces — don’t worry, he’s included the measurements in his post. Playing a game of connect-the-boards-with-carriage-bolts-nuts-and-washers — with a minor pause in the action to attach the feet to the base — all but finished this quick build. All that’s missing now is a hammock in which to recline!

One final note: be sure to use galvanized hardware for this — or any — project that’s expected to spend time out in the elements. Rust is not usually your friend!

Lounging in your backyard beginning to feel a little cramped? Take you relaxation on the road. 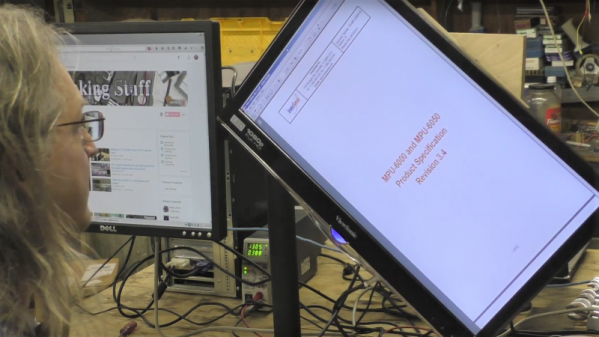 Modern 16:9 aspect ratio monitors may be great for watching a widescreen movie on Netflix, but for most PDFs, Word documents, and certain web pages, landscape just won’t do. But if you’re not writing the next great American novel and aren’t willing to commit to portrait mode, don’t — build an auto-rotating monitor to switch your aspect ratio on the fly.

Like many of us, [Bob] finds certain content less than suitable for the cinematic format that’s become the standard for monitors. His fix is simple in concept, but a little challenging to engineer. Using a lazy susan as a giant bearing, [Bob] built a swivel that can be powered by a NEMA 23 stepper and a 3D-printed sector of a ring gear. Due to the narrow clearance between the top and bottom of the lazy susan, [Bob] had to do considerable finagling to get through holes for the mounting hardware located, but in the end the whole thing worked great.

Our only quibble would be welding galvanized pipe for the stand, which always gives us the willies. But we will admit the tube notching turned out great with just a paper template. We doubt it would have been much better if he used an amped-up plasma-powered tubing notcher.

END_OF_DOCUMENT_TOKEN_TO_BE_REPLACED We remember when retro-gaming required a lot of equipment and a serious time commitment to put together a gaming interface. [Scooter2084] proves that we’ve come a long way with this gaming controller built to complement Android hardware.

It’s not immediately obvious from the image above, but the controller itself looks just like Andy the Android. His head is tilted upward and acts as the tablet stand, while his torso hosts the controls. We don’t the arms and legs have a functional use but they are necessary to complete the look.

Traditionally arcade controls have used a hacked gamepad, or dedicated hardware like the MAME cabinets that use iPac control boards. But this rendition interfaces the joystick and four buttons using an Arduino. A Bluetooth shield lets you control the Android device wirelessly, and opens up the possibility to use this as a controller for laptop-based emulators and the like. Don’t miss the video after the break.