Even before the Industrial Revolution, gears of one kind or another have been put to work both for and against us. From ancient water wheels and windmills that ground grain and pounded flax, to the drive trains that power machines of war from siege engines to main battle tanks, gears have been essential parts of almost every mechanical device ever built. The next installment of our series on Mechanisms will take a brief look at gears and their applications.

END_OF_DOCUMENT_TOKEN_TO_BE_REPLACED

Servers are most often found in climate controlled data centers. This means they aren’t exactly built for creature comforts like quiet operation. Quite the contrary — many server chassis include fans which absolutely scream when the machine is under load. [Whiskykilo] needed to set up a 12 U rack in his basement for working from home. He knew the sound would get on anyone’s nerves, but especially on those of his wife.

To solve this problem, he built a sound isolated rack. The build started with a standard 12 U metal rack frame. This is wrapped in 1/2″ MDF coated with automotive sound deadening material. An outer frame built of 1×4 lumber and another layer of 1/2″ MDF. Isolating the inner and outer boxes made the biggest contribution to quieting down the noisy servers.

Computers need to breathe, so the front and back doors of the rack enclosure include banks of intake and exhaust fans to keep air flowing through the servers. Two AC Infinity controllers keep the fans operating and monitor temperature. These machines do generate some heat – so 64 °F (18C) intake and 81 °F (27C) exhaust is not unheard of. The servers don’t seem to mind running at these temperatures. A Raspberry Pi 3 keeps an eye on UPS operation and displays the data on a 7″ HDMI LCD.

Interested in running a server at home? You don’t have to go to the lumberyard – check out this server made with Ikea components, or this server built from 96 MacBook Pros.

We feature a lot of clocks here on Hackaday, and lately most of them seem to be Nixie clocks. Not that there’s anything wrong with that, but every once in a while it’s nice to see something different. And this electromechanical rack and pinion clock is certainly different.

[JON-A-TRON] calls his clock a “perpetual clock,” perhaps in a nod to perpetual calendars. But in our opinion, all clocks are perpetual, so we’ll stick with “linear clock.” Whatever you call it, it’s pretty neat. The hour and minute indicators are laser cut and engraved plywood, each riding on a rack and pinion. Two steppers advance each rack incrementally, so the resolution of the clock is five minutes. [JON-A-TRON] hints that this was a design decision, in part to slow the perceived pace of time, an idea we can get behind. But as a practical matter, it greatly simplified the gear train; it would have taken a horologist like [Chris] at ClickSpring to figure out how to gear this with only one prime mover.

In the end, we really like the look of this clock, and the selection of materials adds to the aesthetic. And if you’re going to do a Nixie clock build, do us a favor and at least make it levitate.

END_OF_DOCUMENT_TOKEN_TO_BE_REPLACED 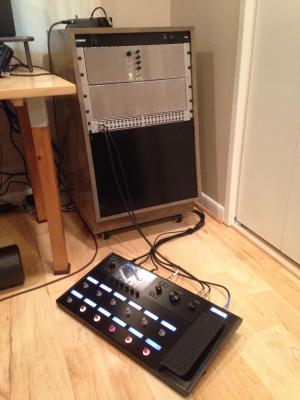 If you’re anything like us, your complete shoe collection consists of a pair of work boots and a pair of ratty sneakers that need to wait until the next household haz-mat day to be retired. But some people have a thing for shoes, and knowing which pair is suitable for the weather on any given day is such a bother. And that’s the rationale behind this Raspberry Pi-driven weather-enabled shoe rack.

The rack itself is [zealen]’s first woodworking project, and for a serious shoeaholic it’s probably too small by an order of magnitude. But for proof of principle it does just fine. The rack holds six pairs, each with an LED to light it up. A PIR sensor on the top triggers the Raspberry Pi to light up a particular pair based on the weather, which we assume is scraped off the web somehow. [zealen] admits that the fit and finish leave a bit to be desired, but for a first Rasp Pi project, it’s pretty accomplished. There’s plenty of room for improvement, of course – RFID tags in the shoes to allow them to be placed anywhere in the rack springs to mind.

Raspberry Pi clusters are a dime a dozen these days. Well, maybe more like £250 for a five-Pi cluster. Anyway, this project is a bit different. It’s exquisitely documented.

[Nick Smith] built a 5-node Pi 3 cluster from scratch, laser-cutting his own acrylic case and tearing down a small network switch to include in the design. It is, he happily admits, a solution looking for a problem. [Smith] did an excellent job of documenting how he designed the case in CAD, prototyped it in wood, and how he put the final cluster together with eye-catching clear acrylic.

Of interest is that he even built his own clips to hold the sides of the case together and offers all of the files for anyone who wants to build their own. Head over to his page for the complete bill of materials (we didn’t know Pis were something you could order in 5-packs). And please, next time you work on a project follow [Nick’s] example of how to document it well, and how to show what did (and didn’t) work.

If 5 nodes just doesn’t do it for you, we suggest this 120-node screen-equipped monster, and another clear-acrylic masterpiece housing 40 Pis. This stuff really isn’t only for fun and games. Although it wasn’t Pi-based, here’s a talk at Hackaday Belgrade about an ARM-based SBC cluster built to crunch numbers for university researchers. 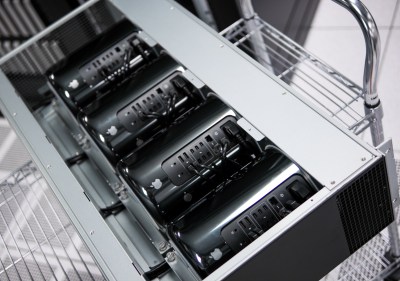