It’s taken 54 years, but soon, you’ll finally be able to buy a fully-functional version of the tricorder from Star Trek. Announced on the official website for the legendary sci-fi franchise, the replica will be built by The Wand Company, who’ve previously produced a number of high-quality official Star Trek props as well as replicas for Doctor Who and the Fallout game series.

Admittedly, we’re not sure what a “fully-functional tricorder” actually is, mainly because the various on-screen functions of the device were largely driven by whatever bind Kirk and Spock managed to find themselves in that week. But the announcement mentions the ability to scan radio frequencies, pull in dynamic data from environmental sensors, and record audio. The teaser video after the break doesn’t give us any more concrete information than the announcement, but it does seem to confirm that we’ll be viewing said data on the device’s iconic flip-up display.

Now as the regular Hackaday reader knows, fans have been building extremely impressive “functional” tricorders for some time now. Unlike the sleek 24th century versions seen in Star Trek: The Next Generation, the original tricorder prop was rather clunky and offers plenty of internal volume for modern goodies. Cramming a Raspberry Pi, LCD, and a bunch of sensors into an inert replica is a relatively approachable project. So it will be interesting to see how the official version stacks up to what’s already been done by intrepid hackers and makers.

The official tricorder won’t be available until summer of 2021, but you can sign up to be notified when it’s your turn to beam one up. While the $250 USD sticker price might keep the more casual Trekkers at bay, it’s actually a bit cheaper than we would have assumed given the amount of time and money we’ve seen fans put into their own builds.

END_OF_DOCUMENT_TOKEN_TO_BE_REPLACED 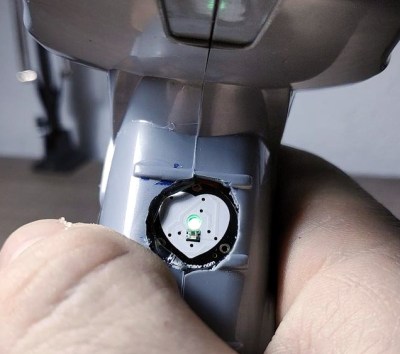 END_OF_DOCUMENT_TOKEN_TO_BE_REPLACED

We’ve all been there. You want to assemble a proper Star Trek: The Original Series landing party prop set, but the TOS tricorders you can find on the market are little more than overpriced toys. Imagine the embarrassment of beaming down to Cestus III with a plastic tricorder. The Metrons wouldn’t have even bothered with the trial by combat with such a sorry showing. 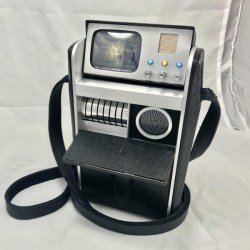 Unhappy with the state of Star Trek props, [Dean O] decided to take matters into his own hands. He purchased a TOS tricorder from Diamond Select Toys and set out to modify it into something a bit closer to Starfleet standards. Anything painted metallic silver on the toy was replaced with a machined aluminum duplicate, adding some much needed heft. He even spruced up the controls and display.

To start, [Dean] stripped the tricorder down, separating all of the silver plastic parts and finding aluminum stock that was close enough to the desired dimensions. This ended up being .125″ plate for the sides, and .500″ bars for the horizontal dividers. To make the side panels he placed the original plastic parts over the aluminum, marked the mounting holes with a punch, and used the belt sander to shape them.

[Dean] then put in a more screen accurate Moire disc, and went as far as to get real watch crowns for the buttons (just like the prop used in the show). In a particularly bold move, he even drilled out the center of watch crowns to install plastic light pipes for LED illumination.

Last year we saw a build that crammed a Raspberry Pi into the same Diamond Select tricorder toy to excellent effect. Now somebody just needs to combine both projects and they’ll have the slickest tricorder in the Alpha Quadrant.

In a classic episode of Star Trek, Spock attempts to get data from a tricorder while stuck in the 1930s using what he described as “stone knives and bearskins.” In reality, he used vacuum tubes, several large coils, and a Jacob’s ladder. Too bad they weren’t in the year 2017. Then Spock could have done like [Directive0] and used a Raspberry Pi instead. You can see the result in the video below.

The build starts with a Diamond Select Toys model tricorder. The Raspberry Pi, a battery, a TFT screen, and a Pi Sense Hat make up the bulk of the build.

END_OF_DOCUMENT_TOKEN_TO_BE_REPLACED

The hardware coming out of [Dr. Peter Jansen]’s lab is the craziest stuff you can imagine. He’s built a CT scanner out of plywood, and an MRI machine out of many, many turns of enamel wire. Perhaps his best-known build is his Tricorder – a real, all-sensing device with permission from the estate of [Gene Roddenberry] to use the name. [Peter]’s tricorder was one of the finalists for the first Hackaday Prize, but that doesn’t mean he’s stopped working on it. Sensors are always getting better, and by sometime in the 23rd century, he’ll be able to fit a neutrino detector inside a tiny hand-held device.

One of the new sensors [Peter] is working with is the MAX30105 air particle sensor. The marketing materials for this chip say it’s designed for smoke detectors and fire alarms, but this is really one of the smallest dust and particle sensors on the market. If you want a handheld device that detects dust, this should be the chip you’re looking at.

Unfortunately, Maxim is being very, very tight-lipped about how this particle sensor works. There is a way to get access to raw particle counts and the underlying algorithms, and Maxim is more than willing to sell those algorithms through a third-party distributor. That’s simply not how we do things around here, so [Peter] is looking for someone with a fancy particle sensor to collect a few hours of data so he can build a driver for this chip.

Here’s what we know about the MAX30105 air particle sensor. There are three LEDs inside this chip (red, IR, and green), and an optical sensor underneath a piece of glass. The chip drives the LEDs, light reflects off smoke particles, and enters the optical sensor. From there, magic algorithms turn this into a number corresponding to a particle count. [Peter]’s hackaday.io log for this project has tons of data, math, and statistics on the data that comes out of this sensor. He’s also built a test rig to compare this sensor with other particle sensors (the DSM501A and Sharp sensors). The data from the Maxim sensor looks good, but it’s not good enough for a Tricorder. This is where you, o reader of Hackaday, come in.

[Peter] is looking for someone with access to a fancy particle sensor to collect a few hours worth of data with this Maxim sensor in a test rig. Once that’s done, a few statistical tests should be enough to verify the work done so far and build a driver for this sensor. Then, [Peter] will be able to play around with this sensor and hopefully make a very cheap but very accurate air particle sensor that should be hanging on the wall of your shop.