Coffee machines are delicate instruments, likely to be damaged by limescale. Thus they will often have a filter present, but filters have a limited capacity of water upon which they can be effective. At Make Bournemouth, they have approached the problem of when to change filters on their coffee machine by applying a bit of high-tech. 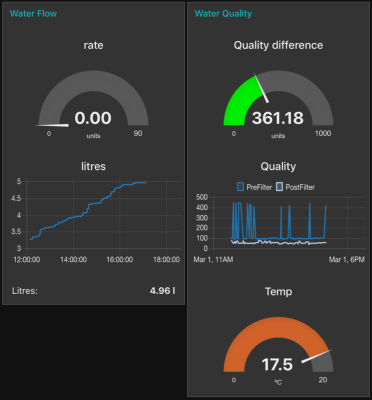 The water passing through the filter is monitored by a couple of DFRobot TDS modules, a flow meter, and a DS18B20 temperature sensor. The data from these is fed into an ESP32 dev board, which makes it available by a web interface for handy accessibility through a smartphone. It can then be used to work out how much of the filter’s capacity has been used, and indicate when a replacement is needed. All the code is available in a GitHub repository, and with luck now Bournemouth’s hackerspace will never see the coffee machine succumb to limescale.

Of course, this isn’t the first coffee maker water hack we’ve brought you. A year or two ago we told you about somebody making their pod coffee maker auto-fill too.

[Bob] was having trouble keeping up with his water troughs. He had to constantly check them to make sure they weren’t empty, and he always found that the water level was lower than he thought. He decided it was time to build his own solution to this problem. What he ended up with was a water level sensor made from PVC pipe and a few other components.

The physical assembly is pretty simple. The whole structure is made from 1/2″ PVC pipe and fittings and is broken into four nearly identical sensor modules. The sensors have an electrode on either side. The electrodes are made from PVC end caps, sanded down flat at the tip. A hole is then drilled through the cap to accommodate a small machine screw. The screw threads are coated in joint compound before the screw is driven into the hole, creating its own threads. These caps are placed onto small sections of PVC pipe, which in turn connect to a four-way PVC cross connector.

On the inside of the electrode cap, two washers are placed onto the screw. A stranded wire is placed between the washers and then clamped in place with a nut. All of the modules are connected together with a few inches of pipe. [Bob] measured this out so it would fit appropriately into his trough, but the measurements can easily be altered to fit just about any size container. The wires all route up through the pipe. The PVC pipe is cemented together to keep the water out. The joint compound prevents any leaks at the electrodes.

A piece of CAT 5 cable connects the electrodes to the electronics inside of the waterproof controller box. The electronics are simple. It’s just a simple piece of perfboard with an XBee and a few transistors. The XBee can detect the water level by testing for a closed circuit between the two electrodes of any sensor module. The water acts as a sort of switch that closes the circuit. When the water gets too low, the circuit opens and [Bob] knows that the water level has lowered. The XBee is connected to a directional 2.4GHz antenna to ensure the signal reaches the laptop several acres away. END_OF_DOCUMENT_TOKEN_TO_BE_REPLACED When you need a mechanism to detect the water level within a container or tank, you have several different options. Most people opt for a simple float or probe that sits in the water, while others use optics to sense when the water is reaching an undesired level.

This device built by [Danilo Abbasciano] uses a Parallax Ping sensor instead. If the sensor is placed at the top of a well, cistern, or other water container, it can accurately calculate the height and volume of the fluid inside. This is done by using the Ping’s readings in conjunction with a few values already known to the user, namely the dimensions of the container.

In his implementation, the readings are relayed to a simple LCD panel for easy viewing, and a small piezo speaker is used to sound an alarm when the water level reaches a predefined threshold. This sort of measuring device can be quite useful in situations where a contact-based sensor would be subject to chemicals and corrosion, or where contamination is a concern.