[Giles Bowkett] has been working on a music library for Ruby called Archaeopteryx. He describes it as a “Ruby MIDI DJing/live-coding thing“. In the video above, He’s using it to generate and then morph rhythms. The Ruby code is directly controlling the step sequencer in Reason. It’s an interesting approach to music development. The video above gives a full intro to the probability approach to generation. To really get a feel for the library, we suggest you watch his presentation from RubyFringe. It shows him playing music by editing a live block of code. Check out his Vimeo feed for many more demo videos.

Zero Day has an interview with German researchers who have found a way to take down the Storm Worm botnet. Their program, Stormfucker, takes advantage of flaws in Storm’s command network: Nodes that are NAT‘d only use a four-byte XOR challenge. Nodes that aren’t NAT’d are only using a trivial 64bit RSA signature. Their solution can clean infected machines and also distribute to other nodes. Unfortunately, installing software without the user’s consent is the exact same behavior as malware. Don’t expect to see this in any sort of widespread use. The researchers did point out that some ISPs have moved to shutting off service for infected customers until their machines are cleaned. 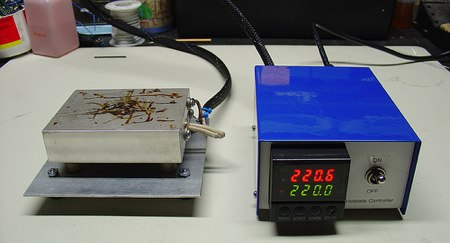 [mightyohm] put together a nice piece of lab kit. It’s a PID controlled hot plate. The plate is capable of reaching 500F, hot enough to do SMD reflow soldering. The large chunk of metal has a hole drilled through the center to contain a cartridge heater. A thermocouple is used to monitor the temperature of the plate. Ceramic standoffs separate the plate from the rest of the device, but he still needs to come up with a way to stop the radiant heating. The control box houses the surplus PID controller along with the power switch and solid state relay (SSR).

[glacialwanderer], who you may remember from his CNC machine build, recently completed an electric spinning wheel. Spinning wheels are used by knitters to turn raw sheep’s wool into yarn. He went through several iterations before arriving at a good design. Besides the motor, there are two major components to the spinning wheel: the flyer and the bobbin. A Scotch tension brake is used to slow the rotation of the bobbin in relation to the flyer. This causes the wool to twist as it’s pulled on.

He initially tried to just use a dimmer switch with an AC motor. That quickly burnt up. The next version used a sewing machine motor since they’re designed with a variable speed control. Unfortunately, it didn’t have enough torque at low speeds. The final design used a DC motor with a SyRen motor controller. It offered plenty of power and at ~$150 it’s still less than the cheapest commercial models on eBay. You can see a video of it and the spinning process embedded below.

END_OF_DOCUMENT_TOKEN_TO_BE_REPLACED

M-CLE, described as ” a physical learning environment in which synergistic artificial intelligence through the use of robots(creative agents) is employed to  embellish the creativity of the child”, looks like a pretty fun toy. For those of you who haven’t figured out what it does from that quote, it is a toy that kids ride on to control a robot. That robot draws on the floor while other robots interact with it using AI. This is all made to “embellish” the child’s creative work.

To control the robot, a child rides on a Fischer Price Smart Cycle. The factory electronics were replaced with an ATMEGA168. A wireless transmitter connects to the robot, which is also powered by an ATMEGA168. While one robot is controlled by the child, the others are packed with sensors to allow them to interact with it. They use touch, ultrasonic ping detectors, and IR line detectors. You can see it all in action in the video summary.

The design is interesting, everything is bright and colorful, and the shark fins on the robots are a nice touch. We have to wonder though, with a toy to ride on, a robot to control, and 3 other robots to watch in wonder, is the child going to be too distracted to be very creative?