The theme of this year’s Hackaday Prize is to build something that matters, and there is nothing more important than water quality and pollution. Everything we eat and drink is influenced by the water quality in rivers and reservoirs. C4Derpillar, a semifinalist for the Hackaday Prize, is solving the problems of water-related health issues with innovative sensors for under $500 USD per unit.

The C4Derpiller is using capillary electrophoresis (CE) to detect anions and cations in waterways. CE pulls a water sample through a very thin tube with an electric current. As water is moving through this capillary, a sensor is able to detect heavy metals, pesticides, and other pollutants in a water supply. The team behind C4Derpiller has written a few posts about the separation chemistry of their device

You can check out C4Derpillar’s Hackaday Prize video below.

END_OF_DOCUMENT_TOKEN_TO_BE_REPLACED 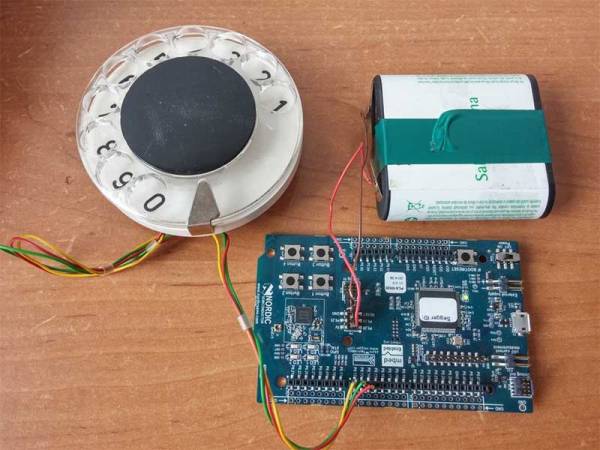 We have seen a few projects that convert a rotary dial for use with modern technology, but this one adds a new twist to the mix: it uses Bluetooth 4.0. [Silent] used a Nordic Semiconductor NRF51 DK development board for the project, which was built from the Nordic SDK source code for creating an HID (Human Interface Device). After what he claims was an hour or so of hacking, he was able to get this Arduino-compatible SoC dev board to detect the pulses from the rotary dial, then pass the appropriate number to a connected device as a key press. This means that his design should work with any device that has Bluetooth 4.0 support. It is powered from a big dry cell because, to quote [Silent], “small coin batteries are not hipster enough”.

It’s a simple project, and we have seen rotary cell phones before, but this still is ripe for expansion. You could either use a smaller, cheaper version of the Nordic chip at the center of this hack, as most of the dev board features aren’t used. Or you could do some more hacking, add support for the Bluetooth HSP headset profile, then wire it up to a vintage phone for the most hipster Bluetooth headset ever. We can’t wait until we see a hipster sitting in a coffee shop banging away on a typewriter and answering this. Get to it, people!

END_OF_DOCUMENT_TOKEN_TO_BE_REPLACED 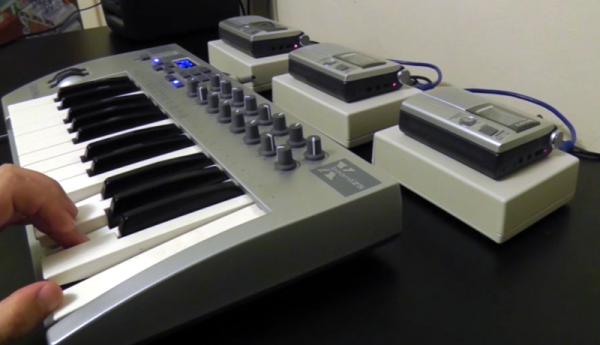 END_OF_DOCUMENT_TOKEN_TO_BE_REPLACED

It’s no secret that hackers like fermentation, both the process and the end results. I myself have a crock of sauerkraut happily bubbling away in the kitchen right now. Fermentation can lead to tasty endpoints, and the process itself, which basically amounts to controlled rotting, is a fascinating set of biochemical reactions. But done wrong, fermentation can result in injury, as it did at CCC this year when a fermentation vessel exploded.

Exactly what happened isn’t really clear, except that Food Hacking Base ran a number of workshops at CCC 2015, several of which involved fermented foods or drinks. A Grolsch-style bottle with a ceramic flip-top was apparently used as a fermentation vessel, but unfortunately the seal was not broken. The bottle found its way to another tent at CCC, this one running an SMD soldering workshop. Carbon dioxide gas built up enough pressure in the bottle to shatter it and send shrapnel flying through the workshop tent. According to a discussion thread on the incident, “people got hurt and need to go to the hospital because glas [sic] particles were stuck in their faces, a throat was cut and an eyelid bleeding.” The explosion was quite energetic, because, “we also found a 20cm long piece of glass that went trough [sic] the ceiling of the tent and propelled for another 4-5 meters afterwards.”

We’ve seen lots of Hackaday projects involving instrumentation and automation of fermentation, including some with really large vessels. The potential for destruction if such a vessel isn’t properly vented is pretty high. At the very least, you’ll be left with a really big mess to clean up. Be careful out there – microbes are not to be trifled with. We don’t want to give you the wrong idea about CCC; this year was incredible as [Elliot Williams] reported during his time there.

Now it’s off to the kitchen to check on my kraut.

[Thanks to Morgan for the tip.]

Getting into FPGA design isn’t a monolithic experience. You have to figure out a toolchain, learn how to think in hardware during the design, and translate that into working Verliog. The end goal is getting your work onto an actual piece of hardware, and that’s what this post is all about.

In the previous pair of installments in this series, you built a simple Verilog demonstration consisting of an adder and a few flip flop-based circuits. The simulations work, so now it is time to put the design into a real FPGA and see if it works in the real world. The FPGA board we’ll use is the Lattice iCEstick, an inexpensive ($22) board that fits into a USB socket.

Like most vendors, Lattice lets you download free tools that will work with the iCEstick. I had planned to use them. I didn’t. If you don’t want to hear me rant about the tools, feel free to skip down to the next heading.