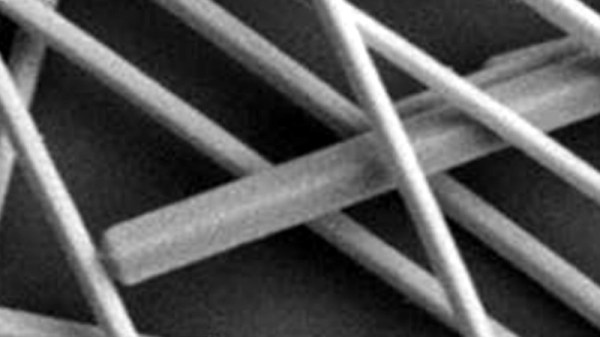 END_OF_DOCUMENT_TOKEN_TO_BE_REPLACED

If you have a serious visual impairment, using a computer isn’t easy. [Dhiraj] has a project that allows people fluent in Braille to use that language for input. In addition to having a set position for fingers, the device also reads the key pressed as you type. With some third party software it is possible to even create Word documents, according to [Dhiraj].

You can see the finished product in the video below. This is one of those projects where the idea is the hardest part. Reading six buttons and converting them into characters is fairly simple. Each Braille character uses a cell of six bumps and the buttons mimic those bumps (although laid out for your fingers).

END_OF_DOCUMENT_TOKEN_TO_BE_REPLACED 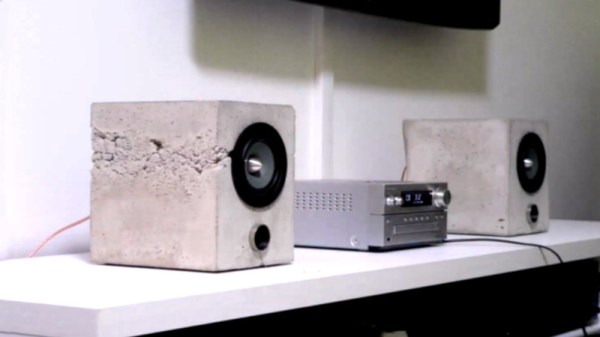 Concrete is great if you feel like making something heavy on the cheap. [Marek Unger] decided to have a go, using the material to cast speaker cabinets for a home hi-fi rig (Youtube link, embedded below).

Initial attempts involved creating a laser-cut MDF outer mold, with a styrofoam core inside to be removed later. This was unsuccessful, and [Marek] developed the design further. The second revision used an inner core also made from lasercut MDF, designed to be left inside after casting. This inner mold already includes the mounting holes for the speaker drivers, making assembly easier too.

Once cast, the enclosures were fitted with Tang-Band W4-1320SIF drivers. These are a full-range driver, meaning they can be used without needing crossovers or other speakers to fill in the frequency range. Each cabinet weighs just over 10kg, and they’re ported for extra response in the lower frequency bands. Sound tests are impressive, and the rough-finished aesthetic of the final product looks great in [Marek]’s living room.

We’ve seen concrete used for all manner of projects, from furnaces to USB hubs. Video after the break.

END_OF_DOCUMENT_TOKEN_TO_BE_REPLACED 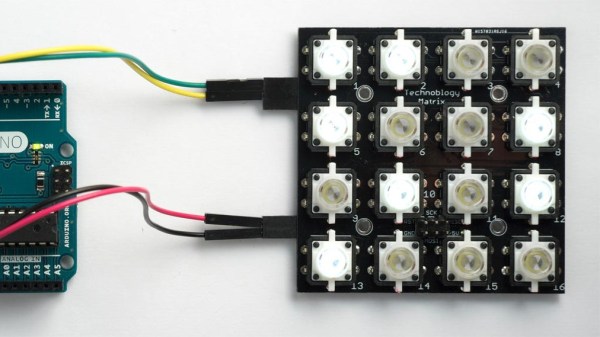 [David Johnson-Davies] always wanted an illuminated button matrix for projects, but cost was never very friendly. That all changed when he discovered a cheap source of illuminated pushbuttons on Aliexpress, leading to this DIY 4×4 illuminated button matrix design which communicates over I2C. The button states can be read independently of setting the light pattern, and an optional interrupt signal gets pulled low whenever there is a change detected. Not bad for one PCB plus about $10-worth in components!

The device uses every single pin on an ATtiny88, and because each button gets its own pin the keypresses can be detected with pin-change interrupts. The state reporting of buttons over I2C is unambiguous, even when multiple buttons are pressed simultaneously. A simple protocol provides all the needed functionality, and all connections are brought to the board’s edge to allow for easily tiling multiple panels.

The GitHub repository contains the code and PCB files and [David] helpfully shared the board files to OSH Park and PCBWay for easy ordering. In addition, he provides two demos (Tacoyaki and Tacoyaki+) which are games related to the classic Lights Out to show off the matrix. 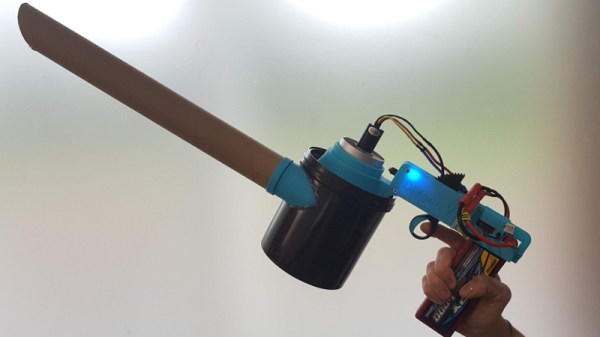 Have you ever seen a product in the store and been shocked at what the manufacturer was trying to charge for it? Since you’re reading Hackaday, we can safely assume the answer to that question; building a homebrew version of some commercial product for a fraction of its retail price is practically a rite of passage around these parts. So it’s fitting that for his entry into the 2019 Hackaday Prize, [Madaeon] submitted the “DIYson”, an open source version of a popular high-end vacuum made by a British company who’s name you can surely guess. 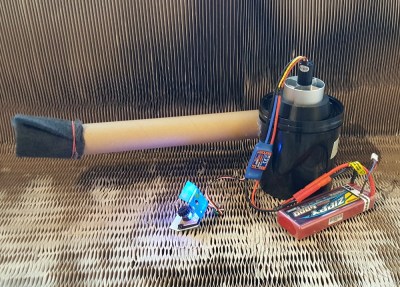 As [Madaeon] explains on the project’s Hackaday.io page, the idea behind “cyclonic” vacuums is not particularly complex. Essentially, with a powerful enough blower and carefully designed chamber, the incoming air will spin around so fast that dust is pulled out by centrifugal force. The trick is getting it working on a small enough scale to be a handheld device. Especially given the energy requirements for the blower motor.

Luckily for the modern hacker, we’re living in the “Golden Age” of DIY. With a 3D printer you can produce plastic components with complex geometry, and thanks to a resurgence in remote controlled aircraft, powerful motors and high capacity lithium-ion batteries are easily obtainable. Powered by what’s essentially the hardware that would go into an electric ducted fan plane, the total cost of all the electronics for the DIYson comes in right around $60 USD. Even with a roll of printer filament added to the mix, you’re still comfortably at half the cost of the “name brand” alternative.

With some refinements, [Madaeon] hopes that this open source dust-buster will be a staple of labs and hackerspaces all over the world. Judging by the performance his early prototype shows in the video after the break, we know we wouldn’t mind having one.

END_OF_DOCUMENT_TOKEN_TO_BE_REPLACED

In the last installment of “The $50 Ham” I built a common tool used by amateur radio operators who are doing any kind of tuning or testing of transmitters: a dummy load. That build resulted in “L’il Dummy”, a small dummy load intended for testing typical VHF-UHF handy talkie (HT) transceivers, screwing directly into the antenna jack on the radio.

As mentioned in the comments by some readers, L’il Dummy has little real utility. There’s actually not much call for a dummy load that screws right into an HT, and it was pointed out that a proper dummy load is commercially available on the cheap. I think the latter observation is missing the point of homebrewing specifically and the Hackaday ethos in general, but I will concede the former point. That’s why at the same time I was building L’il Dummy, I was building the bigger, somewhat more capable version described here: Big Dummy.

END_OF_DOCUMENT_TOKEN_TO_BE_REPLACED

Join Mike Szczys and Elliot Williams as they riff on the coolest hacks from the past week. Clocks and 3D printing seem to keep coming up this week as we look at using an FPGA plus GPS receiver for better accuracy than we’re used to, and we haggle over what to call the robot arms that nudge the hands on a shelf-clock. There’s a wicked 3D-printed planetary gear design, and brackets that turn flat cardboard into boxes (more useful than you might think). We close out with great reads on the Supermicro fallout of the last 7 months, and a pretty big oops-moment as a hacker knocks out keyfobs for an entire neighborhood.