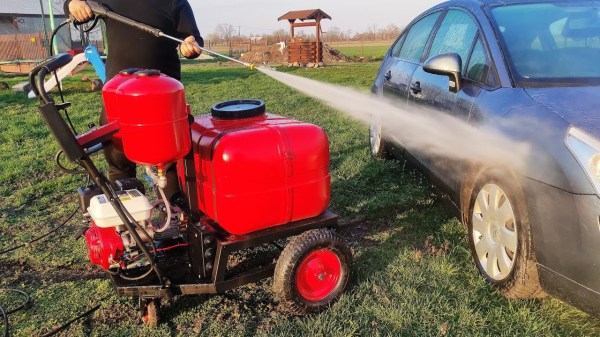 While you can always buy the tools you need, there’s something to be said for the satisfaction gained when you pick up a tool you built yourself. [Workshop From Scratch] has built a following out of building his own gear, the latest of which involved putting together a gas-powered pressure washer.

The key to the build was to keep things completely self-contained. All the consumables – water, soap, and wax – are kept onboard the washer to avoid having to run hoses and so on. A small gas engine is the heart of the build, hooked up to a high-pressure water pump. It even comes complete with a starter motor, making it a certified luxury garden tool. It’s also hooked up to two tanks holding cleaning solutions for car washing purposes, which feed into the pump via an auxiliary port for mixing. It’s all assembled on a custom steel frame welded together from rectangular hollow sections.

It’s a build that demonstrates how you can use your skills to build tools that suit your workflow, rather than just putting up with whatever is available off-the-shelf. We’ve seen his work before, too – building other tools like this motorised plasma cutter. Video after the break.

END_OF_DOCUMENT_TOKEN_TO_BE_REPLACED 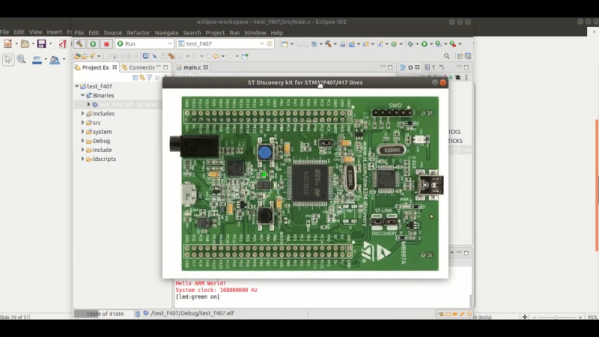 With the advent of super powerful desktop computers, many developers make use of some sort of virtual or psuedo-virtual machines (VM). We run Windows in a VM and do kernel development in a VM, too. If you are emulating the same kind of computer you are on then the process is simpler, but it is possible to run, say, ARM code on an x86 (or vice versa) but with possibly slower performance than running natively. QEMU is probably the best-known program that allows a CPU to run code targeting a different CPU, but — by default — it targets desktop, laptop, and server-class machines, not tiny embedded boards. That’s where xPack QEMU Arm comes in. It allows you to run and debug embedded Cortex-M devices in an emulated environment on a host computer.

The tool supports boards like the Maple — which means it should support bluepill, along with popular boards such as the Nucleo, some discovery boards, and several from Olimex. They have plans to support several popular boards from TI, Freescale, and others, but no word on when that will happen. You can see a decidedly simple video example from [EmbeddedCraft] of blinking a virtual LED in the video below, although you might like to mute your audio before playing it.

END_OF_DOCUMENT_TOKEN_TO_BE_REPLACED

Hot Wheels are some of the most popular diecast toy cars worldwide. The car bodies are faithful recreations of the real thing, though the models are mere stationary playthings. That wasn’t good enough for [Jakarta Diecast Project], who set about modifying a little BMW E30 M3 into an awesome radio-controlled drift car.

The build starts by disassembling the original car, and pulling out the original wheels. The baseplate is then modified to accept a new rear suspension and axle assembly. A small DC motor is mounted to the assembly to drive the rear wheels. A set of front steering knuckles are then installed up front, with their own suspension and hooked up to a tiny servo for steering. Everything’s controlled by a compact off-the-shelf RC receiver, which even features a gyro to help keep the tiny car straight under acceleration. The bodyshell is then stripped of paint, and given a sweet bodykit, before receiving a lurid orange paint job and decals. It’s reattached to the car’s baseplate via magnets, which make taking the car apart easy when service or modifications are required.

While the build doesn’t go into the nitty gritty on some of the harder parts, like the construction of the incredibly complex front knuckles, it’s nonetheless a great guide to building such a tiny and well-presented RC car. In looks and performance, the result trounces typical commercial offerings in the same scale, as you’d expect from such a hand-crafted masterpiece. It may not be the smallest RC car we’ve featured, but it is one of the coolest. Video after the break.

END_OF_DOCUMENT_TOKEN_TO_BE_REPLACED 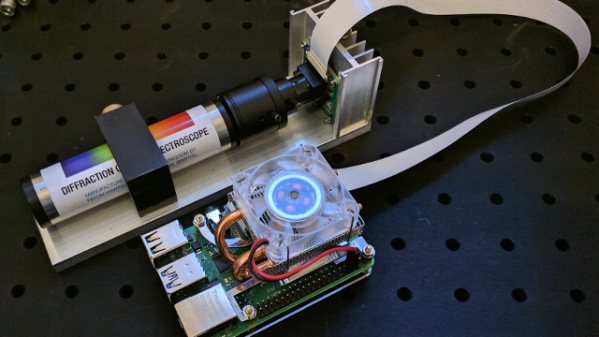 Play around with optics long enough and sooner or later you’re probably going to want a spectrometer. Optical instruments are famously expensive, though, at least for high-quality units. But a useful spectrometer, like this DIY Raspberry Pi-based instrument, doesn’t necessarily have to break the bank.

This one comes to us by way of [Les Wright], whose homebrew laser builds we’ve been admiring for a while now. [Les] managed to keep the costs to a minimum here by keeping the optics super simple. The front end of the instrument is just a handheld diffraction-grating spectroscope, of the kind used in physics classrooms to demonstrate the spectral characteristics of different light sources. Turning it from a spectroscope to a spectrometer required a Raspberry Pi and a camera; mounted to a lens and positioned to see the spectrum created by the diffraction grating, the camera sends data to the Pi, where a Python program does the business of converting the spectrum to data. [Les]’s software is simple by complete, giving a graphical representation of the spectral data it sees. The video below shows the build process and what’s involved in calibrating the spectrometer, plus some of the more interesting spectra one can easily explore.

We appreciate the simplicity and the utility of this design, as well as its adaptability. Rather than using machined aluminum, the spectroscope holder and Pi cam bracket could easily be 3D-printer, and we could also see how the software could be adapted to use a PC and webcam.

END_OF_DOCUMENT_TOKEN_TO_BE_REPLACED 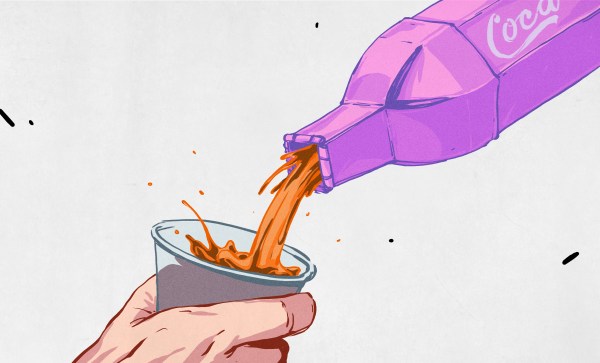 END_OF_DOCUMENT_TOKEN_TO_BE_REPLACED

Hackaday editors Mike Szczys and Elliot Williams pull back the curtain on a week of excellent hacks. We saw an awesome use of RGB LEDs as a data channel on a drone, and the secrets of an IP camera’s OS laid bare with some neat reverse engineering tools. There’s an AI project for the Linux terminal that guesses at the commands you actually want to run. And after considering how far autopilot has come in the aerospace industry, we jump into a look at the gotchas you’ll find when working with models of 3D scanned objects.