It doesn’t happen often that we report on new vacuum tube based computer designs. Today however, we’re pleased to introduce to you the Fast Reliable Electronic Digital Dot Computer, or Fred.Computer for short. It’s the brainchild of [Mike] who also brought us ENA, which we featured earlier.

Fred is a new design that reuses the parts that made up ENA. It has an 8-bit CPU, 16 bytes of RAM, 256 bytes of NVRAM, and runs at a clock speed of 11.3 kHz. With its 560 tubes drawing a total supply current of about 200 A it also provides a fair bit of heating to [Mike]’s study. The main logic is implemented through NOR gates, built from 6N3P dual-triode tubes sourced from Eastern Europe. These NOR gates are combined into more complex structures like latches, registers and even a complete ALU. A total of sixteen machine code instructions can be used to write programs; clever design allows Fred to perform 16, 32 or even 64-bit calculations with its 8-bit ALU.

An interesting addition is a new RAM design based on reed relays. [Mike] realised that relays are actually very similar to digital transmission gates and can therefore be used to make a simple static RAM cell. If you thought relays were too slow for RAM cells, think again: these reed relays can toggle at a mind-boggling 700 Hz, making them more than fast enough for Fred.

The main I/O device is a console that contains several pushbuttons as well as a 12 x 8 LED display. All of this makes Fred a fully-functional general-purpose computer that’s even capable of playing Pong (video, embedded below). [Mike]’s website is full of interesting detail on all aspects of vacuum tube computer design, and makes delightful reading for anyone tempted by the idea of building their own.

Can’t get enough of vacuum tube computers? Have a look at this 1-bit MC14500 implementation, marvel at this modern interpretation of an adding machine, or find out how IBM designed its logic in the 1950s.

END_OF_DOCUMENT_TOKEN_TO_BE_REPLACED 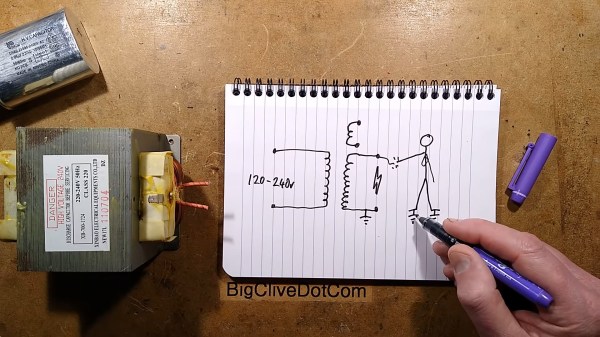 Before deciding whether the headline of this article is clickbait, please take a moment to watch the excellent video by [BigClive] below the break. And then, go to your local search engine and search the phrase “fractal burning death”. We’ll wait.

With that out of the way, we have to admit that when we saw the subject “The most deadly project on the Internet” on [bigclivedotcom]’s YouTube channel, we were a bit skeptical. It’s a big claim. But then we watched the video and did some googling. Sadly, there are over 30 documented cases of this project killing people, and more cases of permanent grievous injury.

Fractal Burning is a hobby where wood is burned by slathering wood in a conductive slurry and then applying high voltage to either side of the wood, usually using something not rated for high voltage, such as jumper cables. The High Voltage is supplied by an unmodified Microwave Oven Transformer. Other projects using MOT’s typically rip out the high voltage secondary windings and re-wind them as low voltage, high amperage transformers, and are using in Spot Welders and even arc welders.

As laid out by [BigClive], the voltages coming from an unmodified MOT, ranging from 2-3 KV (That’s between two and three thousand Volts) at a very low impedance are right up there in the “Don’t go near it!” territory.

END_OF_DOCUMENT_TOKEN_TO_BE_REPLACED 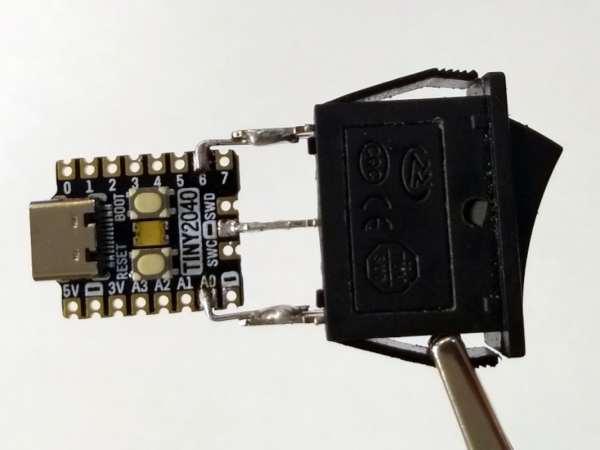 Dualbooting your computer can be a chore, the more switching between OSes you have to do – which is why virtualization or having separate computers are the go-to for many. Failing that, we have no choice but to smooth over our dualbooting experience with various workarounds and helpers. [William Somsky] shares one such helper tool with us – an elegant device made with a RP2040-sporting TinyPICO board and a three-way rocker switch, directing GRUB to boot into either Windows or Linux automatically, or leave us with the usual boot menu. This way, you can just flip the switch, hit “reboot” and walk away, coming back to your PC booted into OS of your choice, instead of timing your presence just so that you can catch the boot menu on time.

All you need to do is to solder a rocker switch to your RP2040 board of choice, then flash the RP2040 with code that detects the state of the switch, and creates a mass storage device hosting a file setting a Grub variable to either one of the 0, 1 or 2. [William] describes his journey, fighting mysterious caching problems, but tells us he got it working in the end. Sadly, [William] hasn’t shared the RP2040-side code with us, but he has at least put the Grub’s custom.cfg file in the ‘Files’ section of the Hackaday.io project.

Readily accessible microcontrollers with mass storage functions sure help make such hacks simple – earlier, we’ve seen dualboot switching like this done by modifying assembly code of the MBR. Dualbooting is a hacker’s rite of passage, and certain OSes of late can make it harder than other ones. Even if you don’t want to dualboot your PC, however, you sure can dualboot an Arduino! 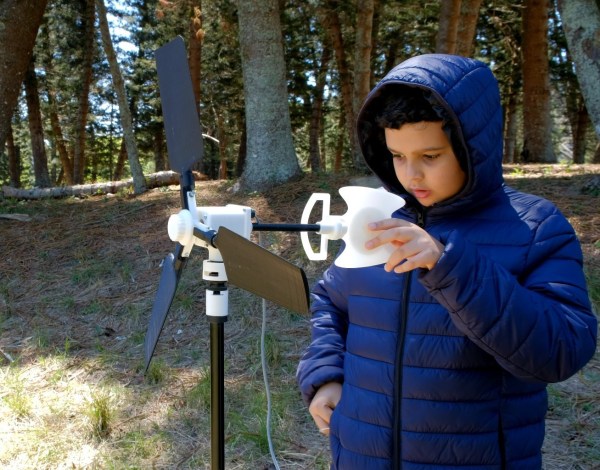 If you’re out in the wilderness and off the grid, but still need to charge your phone, the most obvious way to do that is by using a solar panel. Light, flat and without moving parts, they’re easy to store and carry on a hike. But they obviously don’t work in the dark, so what’s a hiker to do if they want to charge their devices at night? If you happen to be in a windy place, then [adriancubas] has the solution for you: a portable wind turbine that folds up to the size of a 2 L soda bottle.

[adrian] designed the turbine to be light and compact enough to take with him on multi-day camping trips. Nearly all parts are 3D printed in PLA, and although ABS or PETG would have been stronger, the current design seems to hold up well in a moderate breeze. The generator core is made from a stepper motor with a bridge rectifier and a capacitor to create a DC output. [adrian] estimates the maximum power output to be around 12 W, which should be more than enough to charge a few beefy power banks overnight.

All parts are available as STL files on [adrian]’s project page, so if you’re looking for some wind power to charge your gadgets on your next camping trip you can go ahead and build one yourself. While we’ve seen large 3D printed wind turbines before, and portable ones for hikers, [adrian]’s clever folding design is a neat step up towards making wind power almost as easy to use as solar power.

END_OF_DOCUMENT_TOKEN_TO_BE_REPLACED 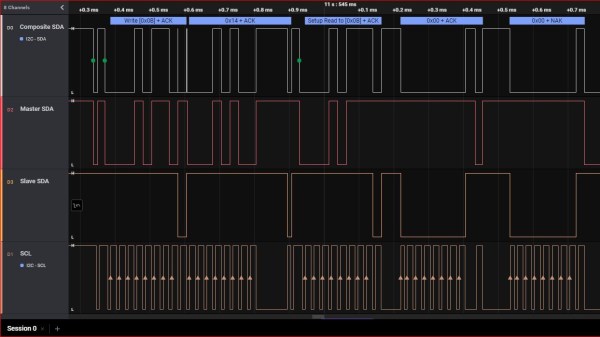 If you’ve ever debugged a misbehaving I2C circuit, you probably know how frustrating it can be. Thankfully [Jim] over at Hackaday.io, has a proto-boardable circuit that can help!

Inter-integrated circuit bus (aka I2C) uses open collector outputs on a two wire interface. Open collector means a device connected to the I2C bus can only pull the bus down to ground. Chips never drive a logic “HIGH” on the wires. When nothing is driving the lines low, a weak resistor pulls the lines up to VCC. This is a good thing, because I2C is also a multidrop bus — meaning many devices can be connected to the bus at the time. Without open collector outputs, one chip could drive a high, while another drives a low – which would create a short circuit, possibly damaging both devices.

Even with all this protection, there can be problems. The SCL and SDA lines in the I2C communication protocol are bidirectional, which means either a controller or a peripheral can pull it low. Sometimes, when tracing I2C communications you’ll need to figure out which part is holding the line low. With many devices sharing the same bus, that can become nigh-impossible. Some folks have tricks with resistors and analog sampling, but the tried and true method of de-soldering and physically lifting chip pins off the bus often comes into play.

[Jim’s] circuit splits SDA signal into controller-side and peripheral-side, helping you make it clear who is to blame for hiccups and stray noise. To do that, he’s using 6N137 optoisolators and LMV393 comparators. [Jim] shared a NapkinCAD schematic with us, meant to be replicate-able in times of dire need. With this design, you can split your I2C bus into four separate channels – controller-side SDA, peripheral-side SDA, combined SDA and SCL. 4 Channels might be a lot for a scope, but this is no problem for today’s cheap logic analyzers.

END_OF_DOCUMENT_TOKEN_TO_BE_REPLACED 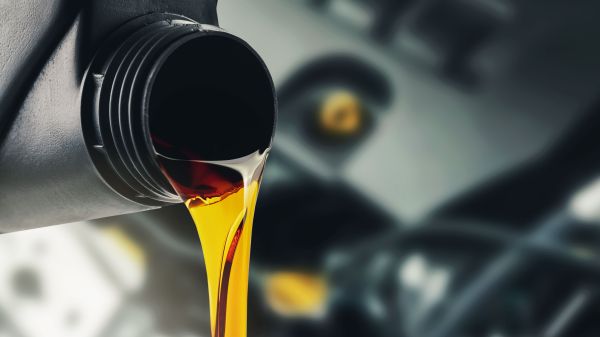 For as long as I’ve been driving, I’ve been changing oil. Longer than that, actually — before I even got my license, I did a lot of the maintenance and repair work on the family car. It seemed natural to do it back then, and it continues today, despite the fact that it would probably be cheaper overall to farm the job out. I keep doing it mainly because I like keeping in touch with what’s going on with my cars.

Oil changes require supplies, but the last few times I made the trip to BigBoxMart I came back empty-handed. I don’t know whether it’s one of the seemingly endless supply chain problems or something else, but the aisle that usually has an abundance of oil was severely understocked. And what was there was mostly synthetic oil, which I’ve never tried before.

I’ve resisted the move to synthetic motor oil because it just seemed like a gimmick to relieve me of more of my hard-earned money than necessary. But now that it seems like I might have little choice but to use synthetic oil, I thought I’d do what normally do: look into the details of synthetic oils, and share what I’ve found with all of you.

END_OF_DOCUMENT_TOKEN_TO_BE_REPLACED 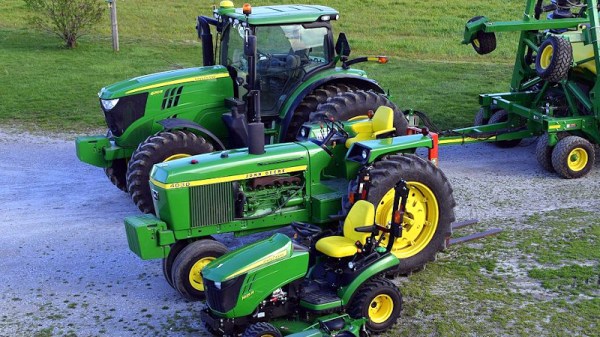 Over many years now we’ve covered right-to-repair stories, and among them has been a constant bête noire. The American farm machinery manufacturer John Deere whose instantly recognisable green and yellow tractors have reliably tilled the soil for over a century, have become the poster child for inappropriate use of DRM. It’s enough to make any farmer see red, but there’s a story from CNN which shows another side to manufacturer control. A Deere dealership in Melitopol, Ukraine, was looted by invading Russian forces, who took away an estimated $5m worth of farm machinery. The perfect crime perhaps, save for the Deere computer system being used to remotely disable them leaving the crooks with combine harvesters they can’t even start.

It makes for a good news story showing the Ukranians getting one over on the looters, and since on-farm thefts are a hot topic anywhere in the world it’s not entirely unexpected that Deere would have incorporated a kill-switch in their products. Recently we covered a look at how the relationship between motor vehicle owner and manufacturer is changing from one of product ownership to software licence, and this is evidently an example of the same thing in the world of machinery. It’s reported that the looters are seeking the help of tractor hackers, which may be unfortunate for them since the world’s go-to source for hacked Deere software is Ukraine. Perhaps they would be better remembering that Russia has legendary tractors of its own.

Thanks [Robert Piston] for the tip.