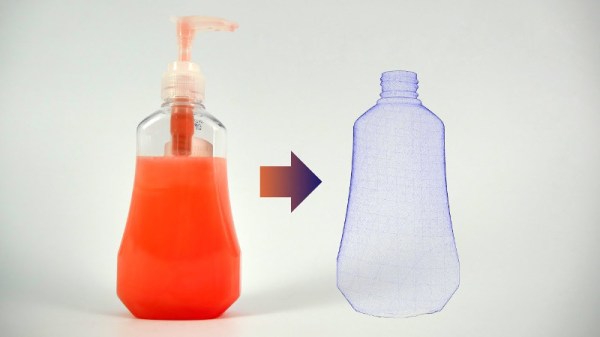 For those with 3D printers, taking a 3D model and spitting out a physical object is so routine as to be blasé. The reverse is something a little different. There are many ways to create a digital 3D model of a physical object, of varying complexity. [Eric Strebel] favors photogrammetry, and has shared a useful guide for those interested in using this technique.

In its most basic sense, photogrammetry refers to taking measurements from photographs. In the sense being discussed here, it more precisely refers to the method of creating a 3D model from a series of photographs of a physical object. By taking appropriate images of an object, and feeding them through the right software, it’s possible to create a digital representation of the object without requiring any special hardware other than a camera.

[Eric] shares several tips and tricks for getting good results. Surface preparation is key, with the aim being to create a flat finish to avoid reflections causing problems. A grey primer is first sprayed on the object, followed by a dusting of black spots, which helps the software identify the object’s contours. Camera settings are also important, with wide apertures used to create a shallow depth-of-field that helps the object stand out from the background.

With the proper object preparation and camera technique taken care of, the hard work is done. All that’s then required is to feed the photos through the relevant software. [Eric] favors Agisoft Metashape, though there are a variety of packages that offer this functionality.

We first reported on photogrammetry back in 2016. If cameras aren’t your thing, you can always give lasers a try. Video after the break.

END_OF_DOCUMENT_TOKEN_TO_BE_REPLACED 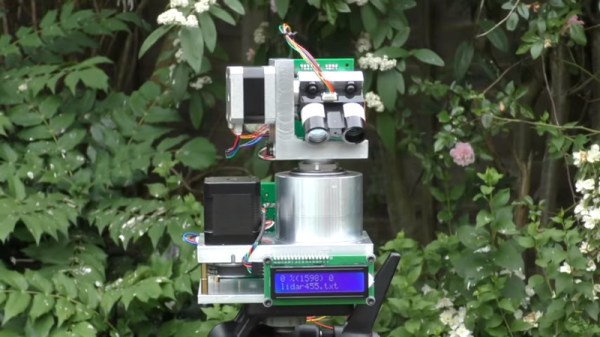 LIDAR is a very exciting technology that is only just now starting to become accessible to the DIY market. Think radar, but with lasers. There’s a few different modules starting to pop up for just a few hundred dollars. But what is one to do with a LIDAR module? Well, [David] decided to build a room scanner with his Garmin LIDAR Lite, and it’s a wonderful sight to behold.

The scanner consists of a rotating platform, which is driven by a stepper motor. The platform then contains a second motor which runs a tilt axis, upon which the LIDAR is mounted. By aiming the LIDAR in various directions, and recording the detected range, it’s possible to build a point cloud representation of the surrounding area.

The build uses a couple of STM32 chips to do motor control and interface with the LIDAR, but where this build really shines is the mechanical side of things. [David] goes into serious detail about the machining of the parts that make up the rotating system, and there’s plenty of cool bits and pieces like slip rings to make it all work. There’s even some home casting going on here! Be warned, though: there’s some rather juicy close-ups of lathes in action, so put the kids to bed before watching this one all the way through.

We love to see a well-executed build, and even more so when we get to watch the intricate details of how it came together. If you’re still looking for some more inspiration, we’ve seen other LIDAR room scanners before, too. 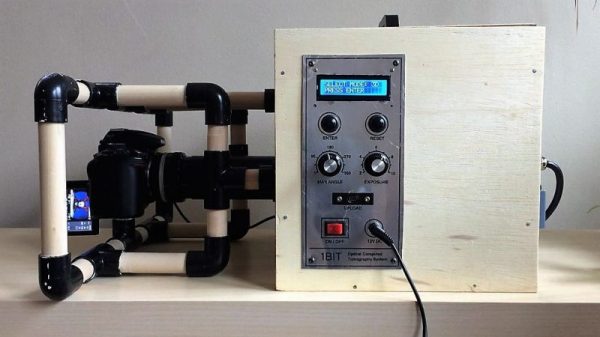 If you’ve ever experienced the heartbreak of finding a seed in your supposedly seedless navel orange, you’ll be glad to hear that with a little work, you can protect yourself with an optical computed tomography scanner to peer inside that slice before popping it into your mouth.

We have to admit to reading this one with a skeptical eye at first. It’s not that we doubt that a DIY CT scanner is possible; after all, we’ve seen examples at least a couple of times before. The prominent DSLR mounted to the scanning chamber betrays the use of visible light rather than X-rays in this scanner — but really, X-ray is just another wavelength of light. If you choose optically translucent test subjects, the principles are all the same. [Jbumstead]’s optical CT scanner is therefore limited to peeking inside things like slices of tomatoes or oranges to look at the internal structure, which it does with impressive resolution.

This scanner also has a decided advantage over X-ray CT scanners in that it can image the outside of an object in the visible spectrum, which makes it a handy 3D-scanner in addition to its use in diagnosing Gummi Bear diseases. In either transmissive or reflective mode, the DSLR is fitted with a telecentric lens and has its shutter synchronized to the stepper-driven specimen stage. Scan images are sent to Matlab for reconstruction of CT scans or to Photoscan for 3D scans.

The results are impressive, although it’s arguably more useful as a scanner. Looking to turn a 3D-scan into a 3D-print? Photogrammetry is where it’s at.

END_OF_DOCUMENT_TOKEN_TO_BE_REPLACED

Sometimes when you walk into a hackerspace you will see somebody’s project on the table that stands so far above the norm of a run-of-the-mill open night on a damp winter’s evening, that you have to know more. If you are a Hackaday scribe you have to know more, and you ask the person behind it if they have something online about it to share with the readership. 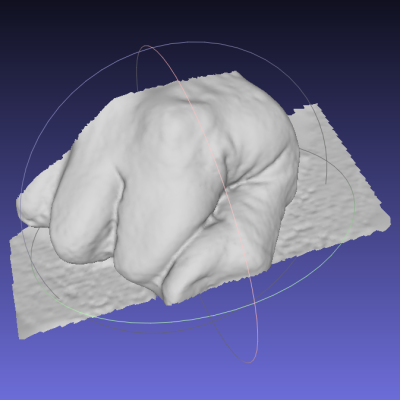 [Jolar] was working on his 3D scanner project on just such an evening in Oxford Hackspace. It’s a neatly self-contained unit in the form of a triangular frame made of aluminium extrusions, into which are placed a stack of Raspberry Pi Zeros with attached cameras, and a very small projector which needed an extra lens from a pair of reading glasses to help it project so closely.

The cameras are arranged to have differing views of the object to be scanned, and the projector casts an array of randomly created dots onto it to aid triangulation from the images. A press of a button, and the four images are taken and, uploaded to a cloud drive in this case, and then picked up by his laptop for processing.

A Multi-view Stereo (MVS) algorithm does the processing work, and creates a 3D model. Doing the processing is VisualSFM, and the resulting files can then be viewed in MeshLab or imported into a CAD package. Seeing it in action the whole process is quick and seamless, and could easily be something you’d see on a commercial product. There is more to come from this project, so it is definitely one to watch.

Four Pi boards may seem a lot, but it is nothing to this scanner with 39 of them. 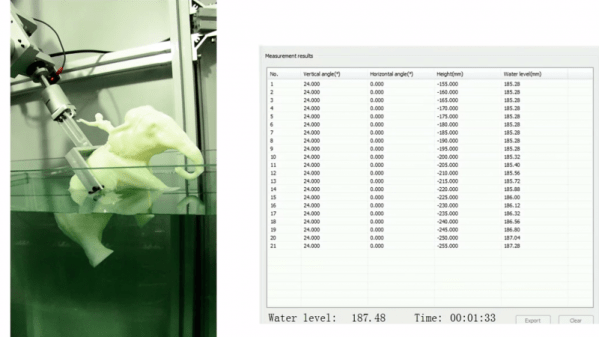 3D-scanning seems like a straightforward process — put the subject inside a motion control gantry, bounce light off the surface, measure the reflections, and do some math to reconstruct the shape in three dimensions. But traditional 3D-scanning isn’t good for subjects with complex topologies and lots of nooks and crannies that light can’t get to. Which is why volumetric 3D-scanning could become an important tool someday.

As the name implies, volumetric scanning relies on measuring the change in volume of a medium as an object is moved through it. In the case of [Kfir Aberman] and [Oren Katzir]’s “dip scanning” method, the medium is a tank of water whose level is measured to a high precision with a float sensor. The object to be scanned is dipped slowly into the water by a robot as data is gathered. The robot removes the object, changes the orientation, and dips again. Dipping is repeated until enough data has been collected to run through a transformation algorithm that can reconstruct the shape of the object. Anywhere the water can reach can be scanned, and the video below shows how good the results can be with enough data. Full details are available in the PDF of their paper.

While optical 3D-scanning with the standard turntable and laser configuration will probably be around for a while, dip scanning seems like a powerful method for getting topological data using really simple equipment.

Thanks to [bmsleight] for the tip. 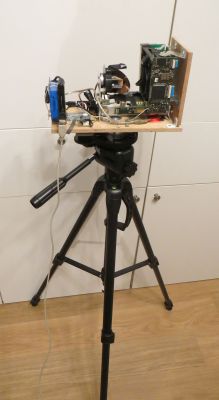 END_OF_DOCUMENT_TOKEN_TO_BE_REPLACED

3D scanners don’t have to be expensive or high-tech because all of the magic goes on in software. The hardware setup just needs to gather a bunch of cross-sections. In perhaps the lowest-tech of scanners that we’ve seen, [yenfre]’s GotMesh scanner uses milk.

Specifically, the apparatus is a pair of boxes, one with a hole drilled in it. You put the object in the top box and fill it with milk to cover the object. A camera takes pictures of the outline of the object in the milk as it drains out the hole, these get stitched together, and voilà.

There are limitations to this method. The object gets soaked in milk, so it won’t work for scanning sand-castles. (It’s optimally suited for chocolate-chip cookies, in our opinion.) If the camera is located directly above, the objects have to get wider as the milk drains out. You can do multiple takes with the object rotated at different angles or use multiple cameras to solve this problem. The edge-detection software will have issues with white objects in milk, so maybe you’ll want to scan that porcelain figurine in coffee, but you get the idea. More seriously, the rate of milk drain will slow down a bit as the amount of milk in the upper box decreases. This could also be handled in software.

In all, we’re not surprised that we don’t see commercial versions of this device, but we love the idea. It’s based on this experiment where they dip a guy in a tank of ink! If you just drank all your milk, but still have a line-laser lying around, maybe this build is more your speed. What’s your cheapest 3D scanner solution?