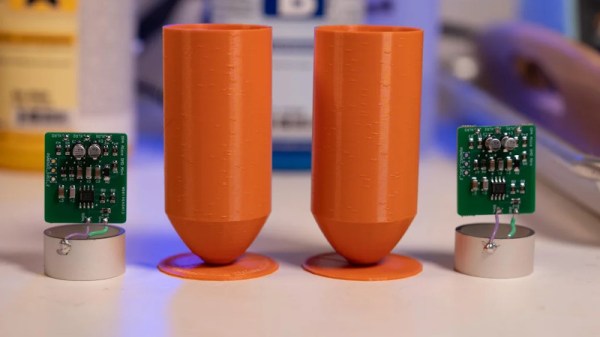 The microphone is a pretty ubiquitous piece of technology that we’re all familiar with, but what if you’re not looking to record audio in the air, and instead want to listen in on what’s happening underwater? That’s a job for a hydrophone! Unfortunately, hydrophones aren’t exactly the kind of thing you’re likely to find at the big-box electronics store. Luckily for us, [Jules Ryckebusch] picked up a few tricks in his 20-year career as a Navy submariner, and has documented his process for building a sensitive hydrophone without needing a military budget. 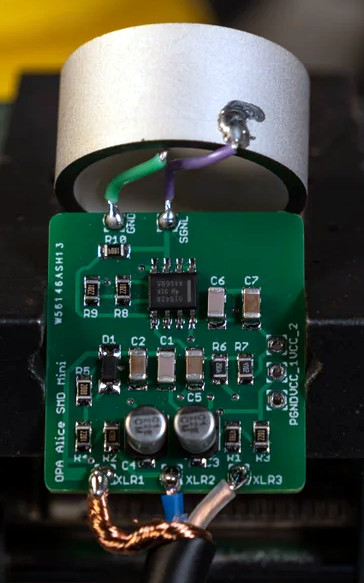 Fascinated by all the incredible sounds he used to hear hanging around the Sonar Shack, [Jules] pored over documents related to hydrophone design from the Navy and the National Oceanic and Atmospheric Administration (NOAA) until he distilled it all down to a surprisingly straightforward build. The key to the whole build is a commercially available cylindrical piezoelectric transducer designed for underwater communication that, incredibly, costs less than $20 USD a pop.

The transducer is connected to an op-amp board of his own design, which has been adapted from his previous work with condenser microphones. [Jules] designed the 29 x 26 mm board to fit neatly within the diameter of the transducer itself. The entire mic and preamp assembly can be cast inside a cylinder of resin. Specifically, he’s found an affordable two-part resin from Smooth-On that has nearly the same specific gravity as seawater. This allows him to encapsulate all the electronics in a way that’s both impervious to water and almost acoustically transparent. A couple of 3D-printed molds later, the hydrophone was ready to cast.

Interestingly, this isn’t the first homebrew hydrophone we’ve seen. But compared to that earlier entry, which basically just waterproofed a standard microphone pickup, we think this more thoughtful approach is likely to have far better performance.

END_OF_DOCUMENT_TOKEN_TO_BE_REPLACED 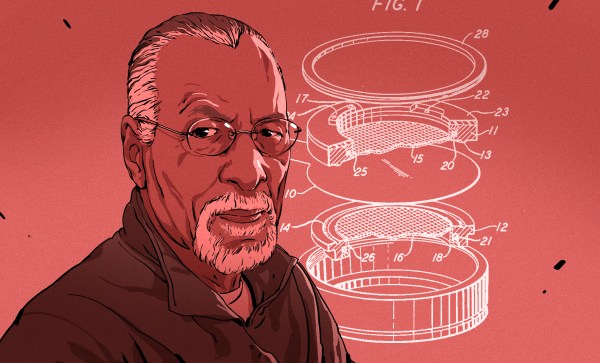 I’d be surprised if you weren’t sitting within fifty feet of one of James Edward Maceo West’s most well-known inventions — the electret microphone. Although MEMS microphones have seen a dramatic rise as smartphone technology progresses, electret microphones still sit atop the throne of low-cost and high-performance when it comes to capturing audio. What’s surprising about this world-changing invention is that the collaboration with co-inventor Gerhard Sessler began while James West was still at university, with the final version of the electret springing to life at Bell Labs just four years after his graduation.

James’ approach to learning sounds very familiar: “If I had a screwdriver and a pair of pliers, anything that could be opened was in danger. I had this need to know what was inside.” He mentions a compulsive need to understand how things work, and an inability to move on until he has unlocked that knowledge. Born in 1931, an early brush with mains voltage started him on his journey.

END_OF_DOCUMENT_TOKEN_TO_BE_REPLACED

Hackaday editors Elliot Williams and Mike Szczys flip through the index of great hacks. This week we learn of a co-existence attack on WiFi and Bluetooth radios called Spectra. The craftsmanship in a pneumatic drone is so awesome we don’t care that it doesn’t fly. Building a powerful TEA laser is partly a lesson in capacitor design. And join us in geeking out at the prospect of big rigs getting their juice from miles of overhead wires.

END_OF_DOCUMENT_TOKEN_TO_BE_REPLACED 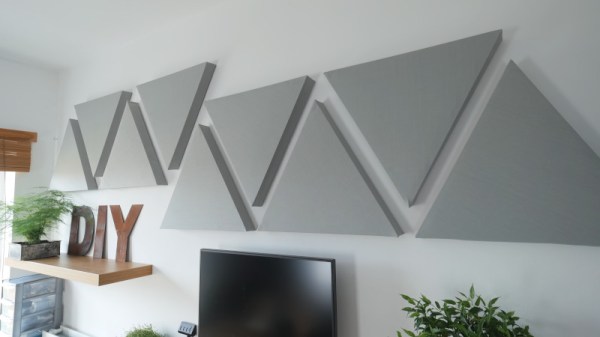 Plenty of hackers and makers are passionate about content creation. In the dog-eat-ice-bucket-challenge world of online video, production value is everything. If you want to improve your audio quality then cutting down on echoes is a must, and these acoustic panels will help you to do just that.

The build starts with aluminium L-channel, affixed together into an equilateral triangle with the help of some 3D printed brackets. Two of the triangular frames are then fitted together via a series of hexagonal standoffs. Foam or housing insulation is then added to act as the primary sound absorbing material. To give an attractive finish, the panels are covered in fabric. The panels are then placed on to drywall using nails glued into the standoffs.

While the panels are likely more expensive to build than off-the-shelf foam alternatives, they have an attractive look which is key in video studio environments. If you’re wondering where to position them for the best results, there’s a simple and easy approach to figure it out. Video after the break.

END_OF_DOCUMENT_TOKEN_TO_BE_REPLACED 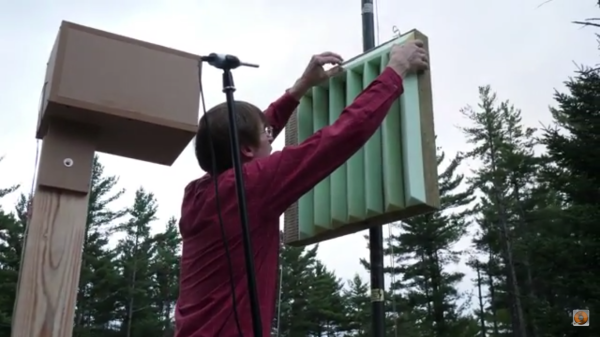 For professional-level sound recording, you’ll need professional-level equipment. Microphones and mixing gear are the obvious necessities, as well as a good computer with the right software on it. But once you have those things covered, you’ll also need a place to record. Without a good acoustic space, you’ll have all kinds of reflections and artefacts in your sound recordings, and if you can’t rent a studio you can always build your anechoic chamber.

While it is possible to carpet the walls of a room or randomly glue egg crate foam to your walls, [Tech Ingredients] tests some homemade panels of various shapes, sizes, and materials against commercially available solutions. To do this he uses a special enclosed speaker pointed at the material, and a microphone to measure the sound reflections. The tests show promising results for the homemade acoustic-absorbing panels, at a fraction of the cost of ready-made panels.

From there, we are shown how to make and assemble these panels in order to get the best performance from them. When dealing with acoustics, even the glue used to hold everything together can change the properties of the materials. We also see a few other cost saving methods in construction that can help when building the panels themselves as well. And, while this build focuses on acoustic anechoic chambers, don’t forget that there are anechoic chambers for electromagnetic radiation that use the same principles as well.

Thanks to [jafinch78] for the tip!