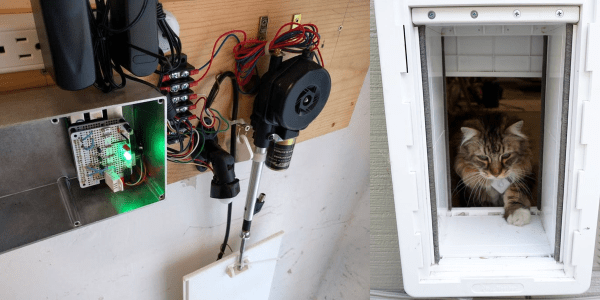 On paper, pet doors are pretty great. You don’t have to keep letting the cat in and out, and there should be fewer scratches on the door overall. Unfortunately, your average pet door is indiscriminate, and will let any old creature waltz right in. Well, [Jeremiah] was tired of uninvited critters, so he built a motorized door with a built-in bouncer. Now, only animals with pre-approved BLE tags can get in.

The bouncer is a Raspi 3 running Node-RED, which scans continuously for BLE advertisements from the cats’ collars. [Jeremiah] settled on Tile tags because they’re reliable and cat-proof. The first version used an Arduino and RFID tags for the cats, but they had to get too close to the door to trigger it.

We love [Jeremiah]’s choice of door actuator, a 12V retractable car antenna. [Jeremiah] uses the antenna itself to lift and lower the removable lockout panel that comes with the door. He removed the circuit that retracts the antenna when power is lost, so that power outages don’t become free-for-alls for shelter-seeking animals.

There’s also a nice feature for slow creatures—the door won’t close until 15 seconds after the last BLE ad, so they cats won’t ever have to Indiana Jones it through the opening. Magnetic switches currently limit the door travel at the top and bottom, though [Jeremiah] will eventually replace them with standard switches. Paw at the break until you get a walk-through video.

Cats will be cats, and the ones that go outside will probably rack up a body count. Here’s a cat door that looks for victims clenched between cat jaws and starts a 15-minute lockout period.

END_OF_DOCUMENT_TOKEN_TO_BE_REPLACED 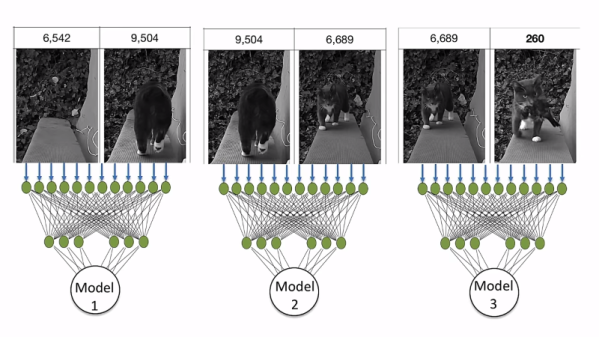 Anyone with a cat knows that the little purring ball of fluff in your lap is one tiny step away from turning into a bloodthirsty serial killer. Give kitty half a chance and something small and defenseless is going to meet a slow, painful end. And your little killer is as likely as not to show off its handiwork by bringing home its victim – “Look what I did for you, human! Are you not proud?”

As useful as a murder-cat can be, dragging the bodies home for you to deal with can be – inconvenient. To thwart his adorable serial killer [Metric], Amazon engineer [Ben Hamm] turned to an AI system to lock his prey-laden cat out of the house. [Metric] comes and goes as he pleases through a cat flap, which thanks to a solenoid and an Arduino is now lockable. The decision to block entrance to [Metric] is based on an Amazon AWS DeepLens AI camera, which watches the approach to the cat flap. [Ben] trained three models: one to determine if [Metric] was in the scene, one to determine whether he’s coming or going, and one to see if he’s alone or accompanied by a lifeless friend, in which case he’s locked out for 15 minutes and an automatic donation is made to the Audubon Society – that last bit is pure genius. The video below is a brief but hilarious summary of the project for an audience in Seattle that really seems quite amused by the whole thing.

So your cat isn’t quite the murder fiend that [Metric] is? An RFID-based cat door might suit your needs better.

END_OF_DOCUMENT_TOKEN_TO_BE_REPLACED Throw your indoor cat a bone (or a tuna steak as it were) this year by building them a summer vacation spot. Since [Travis Brown] lives on a busy street he worries that his cat would get hit by a car if allowed to roam outside. He and a friend found a suitable alternative with this outdoor cat enclosure.

The centerpiece of the build is a platform that overlooks the back yard. It’s got a couple of different levels which lets the cat see over the deck railing, and provides a bit of shade from the sun during the day. Chicken wire encloses the entire structure to make sure our feline friends don’t go off on their own, but the gang-plank that connects the platform to the house lets them decide when to go outside or come back in. The entrance to the house is an open window covered with plywood and fitted with a cat door. This is a nice touch since the cat door can be locked to keep them in a night.

Between this for summer and the heated bed for winter you’re going to have the most spoiled cat on the block.

[Aaron] and his wife have a wonderful cat that likes to contribute to the household by bringing field mice, shrews, and voles into the house as a ‘present.’ Obviously, this leads blood, fur, and viscera staining the carpet, and chasing around mortally wounded rodents isn’t [Aaron]’s idea of fun. To stop the cat from bringing small mammals into the house, [Aaron] is now preventing the cat from entering the house when it has an animal in its mouth.

[Aaron]’s project is inspired by this facial recognition cat door that refuses entry of all cats holding a small rodent in their mouth. To get his system working, [Aaron] started researching object recognition and built an Android app using the OpenCV libraries. To detect if his cat has a rodent in his mouth, [Aaron] is using Harr cascades – a proven object detection system that will detect and differentiate between a cat and a cat plus mouse.

Right now, the project is only about half done. [Aaron] is currently training his object recognition system, a process that can take days. Still, anything that keeps mouse guts out of the carpet is an awesome project in our books. Dogs may be man’s best friend, but cats are certainly a hacker’s best muse. They provide so many ‘reasons’ for projects, like this cat door which [Clement] augmented to monitor the comings and goings of his feline friend (translated). He’s using a web service we hadn’t heard of before called PushingBox to send notifications like Tweets and Emails from the Arduino monitoring that door.

The two white rectangles attached to the cat door in the image above are magnets commonly used for entry door monitoring. Using a pair of them along with reed switches lets the system differentiate between an incoming or outgoing cat. The Arduino is web-connected and running the PushingBox API to manage the notification messages. See a demo of the system in the clip after the break.

This would be a nice addition to the cat door we saw [Dino] build. Of course, if you really want to go all out with the cat hacks the next project should be a GPS tracking collar. END_OF_DOCUMENT_TOKEN_TO_BE_REPLACED [Dino] continues his to satisfy his weekly hacking goal by building a cat door for his pets. He has a Habitat For Humanity resale store nearby that was doing a 50% off sale on doors. So he picked up a six-panel door and set to work.

The first step is drawing out the opening and cutting it with a jigsaw. Once he was done, there’s some reinforcement work to be done because this is a hollow-core door. Since he had already cut a bit of the bottom off of the door to fit his jamb opening, he had some wood stock that was already the right thickness. That bit was secured to the top and bottom of the opening with glue and some brads. The same was done on the sides with a different piece of scrap, then the door was hung in the opening to reach the point in the project seen above.

Here [Dino] prepares to add a flap to cover the opening. He used acrylic for the flap because it’s light-weight and clear. A piece of piano hinge makes it easy to swing in both directions. The final touch is a magnet which keeps the flap from swinging in the breeze using parts from a magnetic cabinet latch. No sooner does he have the flap in place than a brave kitty gives it a test run.

Hopefully he doesn’t have the kind of pests that caused other hackers to build facial recognition cat door locks.