Ever on the lookout for creative applications for tech, [Andres Leon] built a solar powered battery system to keep his Christmas lights shining. It worked, but — pushing for innovation — it is now capable of so much more.

The shorthand of this system is two, 100 amp-hour, deep-cycle AGM batteries charged by four, 100 W solar panels mounted on an adjustable angle wood frame. Once back at the drawing board, however, [Leon] wanted to be able track real-time statistics of power collected, stored and discharged, and the ability to control it remotely. So, he introduced a Raspberry Pi running Raspbian Jessie Lite that publishes all the collected data to Home Assistant to be accessed and enable control of the system from the convenience of his smartphone. A pair of Arduino Deuemilanoves reporting to the Pi control a solid state relay powering a 12 V, 800 W DC-to-AC inverter and monitor a linear current sensor — although the latter still needs some tinkering. A in-depth video tour of the system follows after the break!

END_OF_DOCUMENT_TOKEN_TO_BE_REPLACED 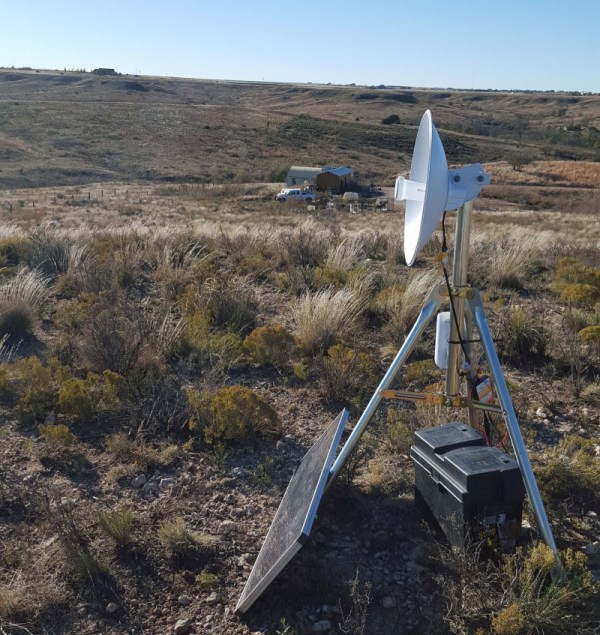 Off-grid living isn’t for everyone, but it has gotten easier in recent years. Cheap solar panels and wind turbines let you generate your own power, and there are plenty of strategies to deal with fuel, water and sanitation. But the one thing many folks find hard to do without – high-speed internet access – has few options for the really remote homestead. [tlankford01] wants to fix that and is working on an open-source mesh network to provide high-speed internet access to off-grid communities.

But first he had to deal with a major problem. With high-speed access provided by a Clearwire wireless network, streaming content to his two flat-screen TVs wasn’t a problem. At least until Sprint bought Clearwire and shut down the service in early November. Another ISP covered his area, but his house lies in a depression out of line of sight of their tower. So he rigged up a bridge between the WiMAX network and his lab. The bridge sits on a hill in sight of the ISP’s tower 3.5 miles away. Solar panels, a charge controller and deep-cycle batteries power everything, and a wireless link down the hill rounds out the build.

This is obviously a temporary solution, and probably wouldn’t last long in winter weather. But it’s working for now, and more importantly it’s acting as proof of concept for a larger mesh system [tlankford01] has in mind. There are plenty of details on what that would look like on his project page (linked above), and it’s worth a look too if you’re interested in off-grid connectivity. [Hackett’s] back at it, this time with some practical advice for the next power outage to hit your city: why not prepare for the worst by building your own bike generator? You’ll no doubt recall that hurricane Sandy devastated New York City’s grid, even flooding substations and causing massive explosions. [Hackett] experienced the Sandy outages first-hand, and knows the value of having this simple build ready to roll.

The project uses a permanent magnet DC motor (around 250 watts), which you can find in electric wheelchairs or other mobility scooters. His setup’s gear reduction spins the motor 50 times for each revolution of the bike wheel. The apparatus [Hackett] built to press-fit the wheel to the motor’s spindle is particularly clever: a threaded rod adjusts the position of the motor, which is bolted onto a hinged platform, with the other part of the hinge welded to a larger frame that supports the bike wheel.

The motor is connected to a home-built charge controller based on Mike Davis’s design, which monitors the deep-cycle batteries and both kills the charge when it’s full as well as turns charging back on after it’s reached a set level of discharge. The rest is gravy: with the deep cycle battery connected to a power inverter, [Hackett] can plug in and keep phones charged, music playing, and even (some of) the lights on. If you’re a fan of [Hackett’s] straightforward, practical presentation style, check out his tripod build and his demonstration of stripping pipes of their galvanization.