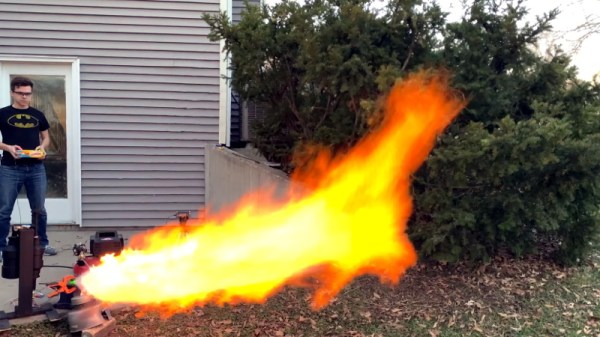 Conceptually speaking, a liquid propellant rocket engine is actually a very simple piece of hardware. All you need to do is spray your fuel and oxidizer into the combustion chamber at the proper ratio, add a spark, and with a carefully designed nozzle you’re off to the races. Or the Moon, as the case may be. It’s just that doing it in the real-world and keeping the whole thing from exploding for long enough to do some useful work is another story entirely.

Taking the process one step at a time, [Luke Walters] has been working on a 3D printed injector that tackles the first half of the problem. After nearly a dozen different prototypes, he’s come up with a printable injector design that atomizes the fuel and combines it with pressurized air at a suitable ratio for combustion. As you can see in the video at the break, it’s certainly capable of generating some impressive fireballs.

The internal passages of the injector have been designed in such a way that fuel (91% isopropyl alcohol) and air are spinning in opposite directions when they meet. This promotes more complete mixing, which in turn leads to a more efficient burn. Originally developed in the 1930s, so-called “swirl injectors” of this type were one of the key technological advancements made by Germany’s V-2 rocket program. Some ideas never go out of style.

Since the injector only touches the fuel and air prior to ignition, it doesn’t need to be particularly heat resistant. To be on the safe side [Luke] has printed the part in PETG at 100% infill, but in reality the flame front is far enough away that temperature isn’t much of a concern. That said, he does hope to eventually fit these injectors into some kind of combustion chamber, which is where things will start getting toasty.

To be clear this is not a rocket engine, and it produces no appreciable thrust. Turning a big flame into a useful means of propulsion is where things get tricky, almost as though it’s rocket science or something. But that doesn’t mean it can’t be done by suitably ambitious hackers.

END_OF_DOCUMENT_TOKEN_TO_BE_REPLACED 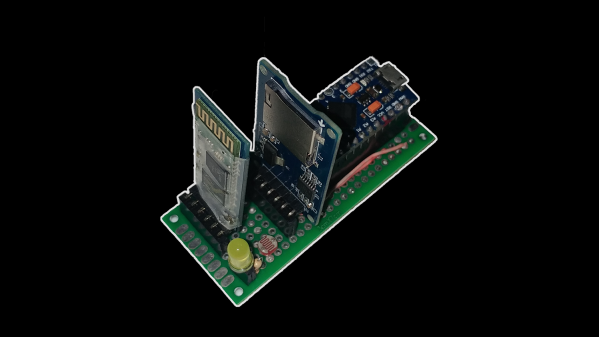 The device consists of an Arduino, a Bluetooth module, and an SD card. When it’s plugged into the target computer the device loads the selected payload from the SD card, compromising the system. Then it does its unique trick which is to switch the injector over to Bluetooth mode. Now the attacker has much more control, albeit local, over the system.

While we would never even be tempted to plug this device into a real computer, we like some of the additional features, like how an added dip switch can be used to select from up to eight different payloads depending on the required attack. The addition of a photo diode is also interesting, and makes us dream of all sorts of impractical movie hacker scenarios. [Amirreza] says it’s to trigger when the person leaves the room and turns the lights off.

[Amirreza] has all the code and design files on the GitHub. There are also a few payload examples, which should be fun to hack on. After all, one of life’s pleasures is to find new ways to mess with your friends. 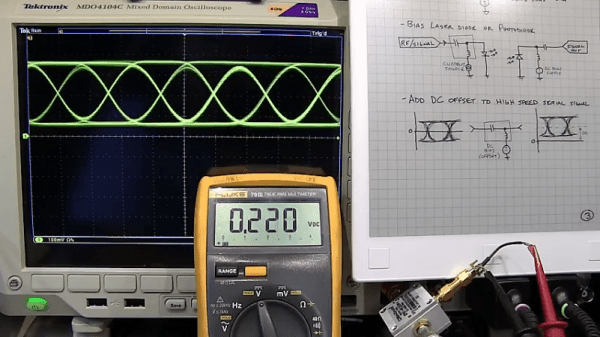 Do you need a bias tee? If you want to put a DC voltage on top of an RF signal, chances are that you do. But what exactly are bias tees, and how do they work?

If that’s your question, [W2AEW] has an answer for you with this informative video on the basics of bias tees. A bias tee allows a DC bias to be laid over an RF signal, and while that sounds like a simple job, theory and practice often deviate in the RF world. The simplest bias tee would have a capacitor in series with the RF input and output to pass AC but block DC from getting out the input, and a DC input with a series inductance to prevent RF from getting into the DC circuit. Practical circuits are slightly more complicated, and [W2AEW] covers all you need to know about how real-world bias tees are engineered. He also gives some use cases for bias tees, from sending DC signals up a feed line to control an antenna tuner or rotator to adding a DC bias to a high-speed serial line.

It’s an interesting circuit, and we learned a lot, which is par for the course with [W2AEW]’s videos. Check out some of his other offerings, like a practical guide to the mysteries of Smith charts, or his visualization of how standing waves work.

END_OF_DOCUMENT_TOKEN_TO_BE_REPLACED We love all of the projects that are coming out for the 555 design contest, so we thought we would share a couple more that have caught our collective eye.  Have a 555 project of your own? Be sure to share it with us, and keep an eye out for the contest submission dates. Read on for a few of our project picks.

END_OF_DOCUMENT_TOKEN_TO_BE_REPLACED 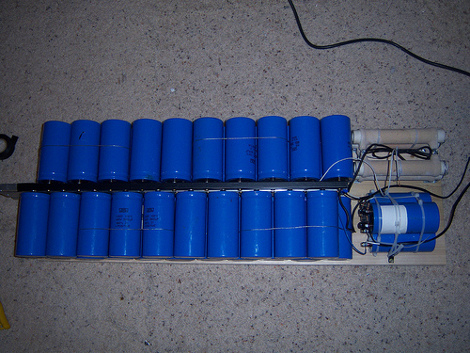