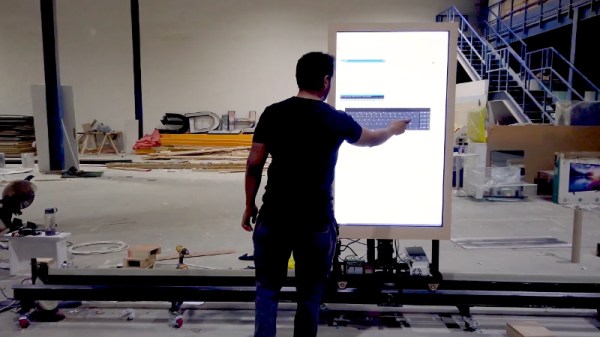 For a recent event, [MakerMan] was tasked with creating an interactive display that could move back and forth along an image of the Moscow skyline to highlight different points of interest. The end result is certainly gorgeous, but since this is Hackaday, we were more excited to see all the behind the scenes video of how it was built.

As with many of his projects, this one started with little more than scrap parts. Two metal I-beams were welded together to make a track, and a wheeled cart was fashioned to ride on it. Using a belt and pulley system that’s not unlike a scaled up version of what you might see on a desktop 3D printer, the motor in the cart is able to move the arrangement back and forth with minimal slop.

The cart actually holds all of the electronics in the project, including the power supplies, MA860H motor controller, a pair of endstop switches, and the Arduino that pulls it all together. A drag chain is used to keep the wires tight to the side of the rail without getting tangled up in anything.

[MakerMan] doesn’t explain much of the software side of this one, though we suppose he might only have been contracted to develop the hardware. But towards the end of the video you can see how the cart, now with large touch screen display mounted on top, moves back and forth when the appropriate commands are sent to the Arduino.

We’re not really sure what application such a contraption would have for the average hacker, but that doesn’t mean we can’t be jealous. There’s just something about huge illuminated screens that just speaks to us.

END_OF_DOCUMENT_TOKEN_TO_BE_REPLACED

So far in this series, everything we’ve covered has been geared around the cheapest and easiest possible means of getting on the air: getting your Technician license, buying your first low-end portable transceiver, and checking in on the local repeater nets. That’s all good stuff, and chances are you can actually take all three of those steps and still have change left over from your $50 bill. Like I said, amateur radio doesn’t have to be expensive to be fun.

But at some point, every new ham is going to yearn for that first “real” rig, something with a little more oomph in terms of power, and perhaps with a few more features. For many Technicians, the obvious choice is a mobile rig, something that can be used to chat with fellow hams on the way to work, or to pass the time while on long road trips. Whatever your motivation is, once you buy a radio, you have to install it, and therein lie challenges galore, both electrical and mechanical.

I recently took the plunge on a mobile rig, and while the radio and antenna were an order of magnitude more expensive than $50, the process of installing it was pretty cheap. But it’s not the price of the thing that’s important in this series; rather, it’s to show that ham radio is all about doing it yourself, even when that means tearing your car apart from the inside out and rebuilding it around a radio.

END_OF_DOCUMENT_TOKEN_TO_BE_REPLACED 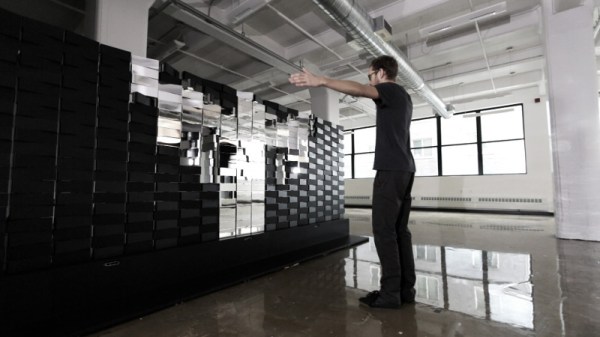 There are a great many technologies we use to display information every day. We’re all familiar with plasma displays and LCDs, and then there’s more esoteric hardware like the split flap displays on municipal buses and around train stations.  However, Breakfast have been working on something that turns architectural features into a display at the same time. Enter Brixels.

The Brixels are capable of continuous 360 degree rotation and also contain LEDs for various illumination based effects. The largest current installation is the Brixel Mirror, standing at 18 feet wide, 6 feet high, and containing 540 individually addressable Brixels. These are built with one half covered in a mirror finish, and combined with a depth-sensing camera for all kinds of fun interactive effects.

Brixels show that architectural features don’t have to be static – they can become kinetic, living things that can be aesthetically beautiful and also useful. Breakfast are known for their installations which use modern electronics to push the limits in their artistic installations. Their work on high-speed flip dot displays is particularly impressive. Video after the break.

[Thanks to Sheldon for the tip!]

END_OF_DOCUMENT_TOKEN_TO_BE_REPLACED

[Niklas Roy] calls it his Perpetual Energy Wasting Machine, but we know it for what it truly is: a building-sized most useless machine. You’ll remember that a most useless machine is a bobble that uses clever design to turn itself off once you have turned it on. This does the same thing with the elevator of the WRO Art Center in Wroclaw, Poland. The one difference is that it continually turns itself on and off.

He rigged up a pulley system that travels through the stairwell of the building. Whenever the elevator door on the top floor opens it causes the call button on the bottom floor to be pressed. The same thing happens when the elevator reaches the ground floor. But he didn’t stop there. Since the device is just wasting electricity whenever the elevator moves without passengers in it, he added a meter to track the loss. It’s the guts of a printing calculator strapped to the inside of the car. Every time the doors open it adds to the total.

You can see the installation in the video clip after the jump.

END_OF_DOCUMENT_TOKEN_TO_BE_REPLACED

Well, it’s June 23rd, and still no dongle from EFiX. Despite a new product page on the company’s site, the OS X installing dongle is still not available for purchase. The USB dongle is supposed to facilitate the installation of Mac OS X by booting the Leopard install DVD on PCs, but so far no one has been able to verify this claim as no one has one of these in their hands yet. We’ve been covering this story since the beginning, and we’ll be sure to let you know when you can actually buy one of these.

The MIT Mobile Experience lab has just developed this ambitious interactive installation called The Cloud. Located in Firenze, Italy, The Cloud is a sort of sculpture with over 15,000 LEDs and several miles of fiber optics. The tips of the fibers glow, but they also change colors in response to human interaction, including touching it or standing near it. The Cloud uses a combination of proximity and touch sensors to achieve this. It also has two cameras and a microphone, which allows it draw input from various sources and output a much richer, more organic response. Do you remember the solenoid concert that used a sequencer to control several solenoids striking different surfaces? Musician David Byrne has taken the concept and executed it on a much larger scale with his “Playing the Building” installation in an old municipal ferry terminal in New York. Devices that bang the girders, rattle the rafters, and blow through the pipes of the building are attached to the only object inside, a weathered pipeorgan. Every key is wired to different device in the building, each producing a unique sound. Attendees are invited to fiddle with keys of the organ to produce sounds from the building’s various materials, thus playing the building like an instrument. Here’s a video from the installation.

[via Today and Tomorrow]