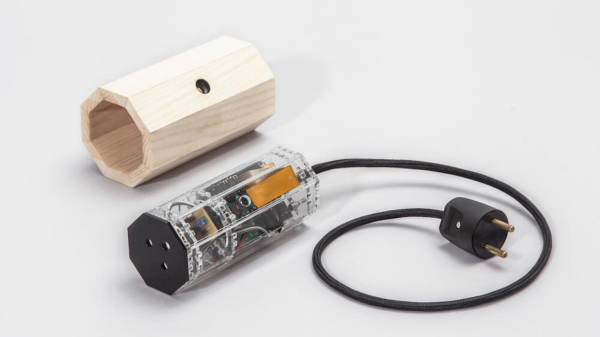 [Bjørn Karmann]’s Objectifier is a device that lets you control domestic objects by allowing them to respond to unique actions or behaviour, using machine learning and computer vision. The Objectifier can turn on a table lamp when you open a book, and turn it off when you close the book. Switch on the coffee maker when you place the mug next to the pot, and switch it off when the mug is removed. Turn on the belt sander when you put on the safety glasses, and stop it when you remove the glasses. Charge the phone when you put a banana in front of it, and stop charging it when you place an apple in front of it. You get the drift — the possibilities are endless. Hopefully, sometime in the (near) future, we will be able to interact with inanimate objects in this fashion. We can get them to learn from our actions rather than us learning how to program them.

The device uses computer vision and a neural network to learn complex behaviours associated with your trigger commands. A training mode, using a phone app, allows you to train it for the On and Off actions. Some actions require more human effort in training it — such as detecting an open and closed book — but eventually, the neural network does a fairly good job.

The current version is the sixth prototype in the series and [Bjørn] has put in quite a lot of work refining the project at each stage. In its latest avatar, the device hardware consists of a Pi Zero, a Raspberry-Pi camera module, an SMPS power brick, a relay block to switch the output, a 230 V plug for input power and a 230 V socket outlet for the final output. All the parts are put together rather neatly using acrylic laser cut support pieces, and then further enclosed in a nice wooden enclosure.

All of the above is what we could deduce looking at the pictures and information on his blog post. There isn’t much detail about the hardware, but the pictures are enough to tell us all. The software isn’t made available, but maybe this could spur some of you hackers into action to build another version of the Objectifier. Check out the video after the break, showing humans teaching the Objectifier its tricks.

END_OF_DOCUMENT_TOKEN_TO_BE_REPLACED 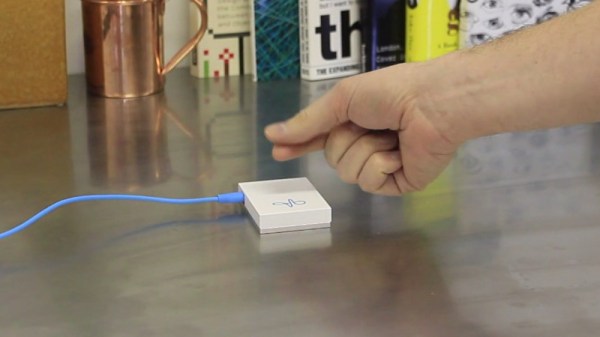 The folks at [Design I/O] have come up with a way for you to play the world’s tiniest violin by rubbing your fingers together and actually have it play a violin sound. For those who don’t know, when you want to express mock sympathy for someone’s complaints you can rub your thumb and index finger together and say “You hear that? It’s the world’s smallest violin and it’s playing just for you”, except that now they can actually hear the violin, while your gestures control the volume and playback.

[Design I/O] combined a few technologies to accomplish this. The first is Google’s Project Soli, a tiny radar on a chip. Project Soli’s goal is to do away with physical controls by using a miniature radar for doing touchless gesture interactions. Sliding your thumb across the side of your outstretched index finger, for example, can be interpreted as moving a slider to change the numerical value of something, perhaps turning up the air conditioner in your car. Check out Google’s cool demo video of their radar and gestures below.

Project Soli’s radar is the input side for this other intriguing technology: the Wekinator, a free open source machine learning software intended for artists and musicians. The examples on their website paint an exciting picture. You give Wekinator inputs and outputs and then tell it to train its model.

The output side in this case is violin music. The input is whatever the radar detects. Wekinator does the heavy lifting for you, just give it input like radar monitored finger movements, and it’ll learn your chosen gestures and perform the appropriately trained output.

[Design I/O] is likely doing more than just using Wekinator’s front end as they’re also using openFrameworks, an open source C++ toolkit. Also interesting with Wekinator is their use of the Open Sound Control (OSC) protocol for communicating over the network to get its inputs and outputs. You can see [Design I/O]’s end result demonstrated in the video below.

END_OF_DOCUMENT_TOKEN_TO_BE_REPLACED

French robot-artist [Lyes Hammadouche]  tipped us off to one of his latest works: a collaboration with [Ianis Lallemand] called Texel. A “texel” is apparently a time-pixel, and the piece consists of eight servo-controlled hourglasses that can tip themselves over in response to viewers walking in front of them. Besides making graceful wavelike patterns when people walk by, they also roughly record the amount of time that people have spent looking at the piece — the hourglasses sit straight up when nobody’s around, resulting in a discrete spatial representation of people’s attentions to the piece: texels.

We get jealous when we see artists playing around with toys like these. Texel uses LIDAR scanners, Kalman-filtered naturally, to track the viewers. openFrameworks, OpenCV, and ROS. In short, everything you’d need to build a complex, human-interactive piece like this using completely open-source tools from beginning to end. Respect!

END_OF_DOCUMENT_TOKEN_TO_BE_REPLACED

You can pretty much tell that this is an outstretched hand shown on a large grid of 7-segment displays. But the only reason you have to look twice is because it is a still photo. When you see the video below it’s more than obvious what you’re looking at… partly because the device is being used as an electronic mirror.

In total there are 192 digits in the display. To make things easier, four-digit modules were used, although we still couldn’t resist showing you the well-organized nightmare that is the wiring scheme. Each module is driven by its own discrete Arduino (driving 28 LEDs as they’re apparently not connecting the decimal point). All 48 Arduino boards receive commands from a Raspberry Pi which is running openFrameworks to generate the animations.

Now of course the project was well under way before [Peter] discovered a similar display from more than a year ago. But we’re glad that didn’t stop them from forging ahead and even building on the idea. They added a camera to the display’s frame which lets it mirror back whatever is in front of it.

What popped into our minds was one of the recent entries for the Trinket contest.

END_OF_DOCUMENT_TOKEN_TO_BE_REPLACED This unique electronic instrument combines a chopped up guitar and a hacked apart glockenspiel with an Arduino. [Aaron]’s Glockentar consists of guitar hardware and glockenspiel keys mounted to a wood body. Solenoids placed above the keys actuate metal rods to play a note.

Under the hood, an Arduino connects the pieces. The conductive pick closes a circuit, which is a digital input into the Arduino. This actuates the corresponding solenoid to play the glockenspiel key, and sends a character to a computer over serial.

[Aaron] has provided a write up that goes into details, including the Arduino and openFrameworks source for the project. There’s also a video overview and demo of the Glockentar after the break.

END_OF_DOCUMENT_TOKEN_TO_BE_REPLACED