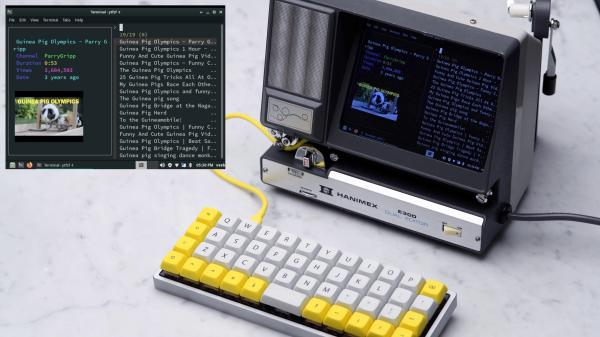 We love hacks that give new life to old gadgets, and [edwardianpug]’s YouTube Terminal certainly fits the bill by putting new hardware inside a Super 8 film editor.

[edwardianpug] could have relegated this classy-looking piece of A/V history to a shelf for display, but instead she decided to refresh its components so it could display any YouTube video instead of just one strip of film at a time. The Boost-Box keeps the retrofuturistic theme going by using the terminal to search for and play videos via Ytfzf.

The original screen has been replaced by an 800×600 LCD, and the yellow USB cord gives a nice splash of color to connect the ortholinear keyboard to the device. Lest you think that this “ruined” a working piece of retro-tech, [edwardianpug] says that 20 minutes would get this device back to watching old movies.

Are you looking for more modern and retro mashups? Check out these Dice Towers Built In Beautiful Retro Cases, a Vacuum Tube and Microcontroller Ham Transmitter, or this Cyberdeck in a Retro Speaker.

END_OF_DOCUMENT_TOKEN_TO_BE_REPLACED 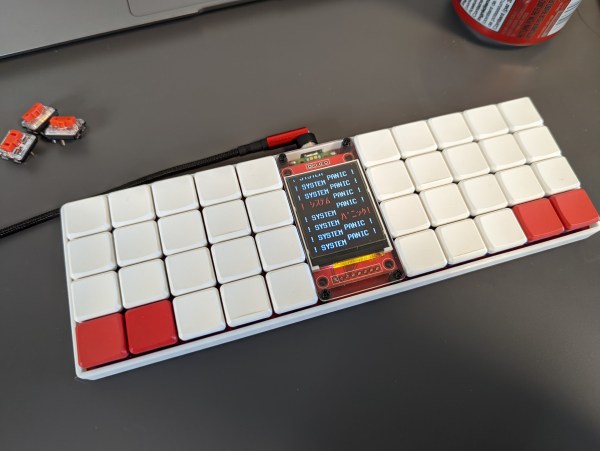 There’s something to be said for über-powerful cyberdecks, but there’s also a certain appeal to less powerful decks squeezed into a tiny form factor. [Christian Lo] has designed a cyberdeck that looks like a simple ortholinear keyboard but is running a more flexible environment.

There are games and animations you can play on QMK, but [Lo] felt that a different framework would give him more flexibility to really stretch the limits of what this Raspberry Pi Pico-powered deck could do. He decided to go with a Rust-based firmware with the keyberon library and says, “it felt like I was in control of the firmware.” While the board is using Rust for now, [Lo] says he’s open to conversations about other firmware options to achieve his goals, like a virtual pet game for the board.

The PCB is described as “bog standard” with the possible exception of placing the Pi in a cutout on the board to keep things as low profile as possible. The trade-off comes in the form of reduced board rigidity and potentially increased strain on the connections to the microcontroller.

Looking for more cool cyberdecks? Check out the Winners of the 2022 Cyberdeck Contest or go see all the entries on the Contest Page.
END_OF_DOCUMENT_TOKEN_TO_BE_REPLACED