If you thought your home-brew project was taking a long time, [Jeroen Brinkman]’s MERCIA Relay Computer project probably has you beat. He began working on this impressive computer back in 2014, and has been at it ever since.  In fact, the ongoing nature of the project is embedded into the name itself — the English translation of the acronym MERCIA is “My Simple Relay Computer Under Construction”.  Being interested in old analog and relay computers from an early age, [Jeroen] took on this project to educate students about how computers work.  The entire computer is build only using relays, diodes, and capacitors, not to mention color-coded wire based on signal functions. Using relays as the primary switching elements is at the core of his educational goal — anyone can understand how a relay works.

Understandably, this thing is big.  But he has cleverly packaged it to visually show the major building blocks of a computer.  While the exact size isn’t stated, we can estimate based on the photo of [Jeroen] standing next to the modules that these panels are about 1.5 m tall and perhaps 60 cm wide.  The whole computer is nine panels wide, making it about 5 meters long.  Except for the ROM assembly, pairs of panels are hinged together and they fold like a book and carried like a suitcases when being moved.  If you enjoy the clickety-clack sound of relays, be sure to watch the relay longevity test in the video below and check out our article on the 1958 FACOM from last year.

This is a fascinating project, but unless you have a couple thousand relays laying around and a decade of free time, it’s probably better to just enjoy [Jeroen]’s work rather than build your own.  We hope he releases schematics and other documentation once the project is finished.  You can follow his Facebook build log if you want to keep track of the progress. Thanks to [David Gustafik] for the tip.

END_OF_DOCUMENT_TOKEN_TO_BE_REPLACED

When it comes to understanding computers, sometimes it’s best to get a good understanding of the basics. How is data stored? How does the machine process this information? In order to answer these questions a bit more and start learning programming, [Nakazoto] built a 10-bit binary adder with relays.

The build is designed from the ground up, including the PCBs, which are milled using a CNC machine. There are six boards: the input board, sequencer board, 2 sum register boards, a carry register board and a 1-bit ALU board. The input board has 32 LEDs on it along with the switches to turn on each bit on or off. In total, 96 relays are used and you can hear them clacking on and off in the videos on the page. Finally, there is a separate switch that sets the adder into subtraction mode.

Usually, [Nakazoto]’s website is mostly about cars, but this is a nice diversion. The article has a lot of detail about both the design and build as well as the theory behind the adder. Other articles on binary adders on the site include this one which uses bigger relays, and this 2-bit adder which uses 555 timers.

END_OF_DOCUMENT_TOKEN_TO_BE_REPLACED

Recently, [Manuel] did a post on making logic gates out of anything. He mentioned a site about relay logic. While it is true that you can build logic gates using switch logic (that is, two switches in series are an AND gate and two in parallel are an OR gate), it isn’t the only way. If you are wiring a large circuit, there’s some benefit to having regular modules. A lot of computers based on discrete switching elements worked this way: you had a PCB that contained some number of a basic gate (say, a two input NAND gate) and then the logic was all in how you wired them together. And in this context, the SPDT relay was used as a two input multiplexer (or mux).

In case you think the relay should be relegated to the historical curiosity bin, you should know there are still applications where they are the best tool for the job. If you’re not convinced by normal macroscopic relays, there is some work going on to make microscopic relays in ICs. And even if they don’t use relays to do it, some FPGAs use mux-based logic inside.  So it’s worth your time to dig into the past and see how simply switching between two connections can make a computer.

How do you go from a two input mux to an arbitrary logic gate? Simple, if you paid attention to the banner image. (Or try it interactive). The mux symbols show the inputs to the left, the output to the right and the select input at the bottom. If the select is zero, the “0” input becomes the output. If the select is one, the “1” input routes to the output.

END_OF_DOCUMENT_TOKEN_TO_BE_REPLACED 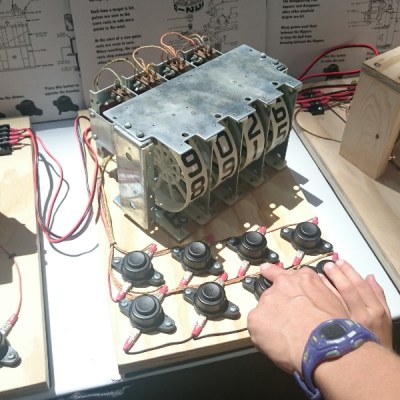 A PS-3 controller has an unbalanced motor inside that vibrates your hand whenever you crash a car into a wall or drive it off a cliff and hit the rocks below but [Rulof Maker] wanted that same feeling all over his body. So he added a serious unbalanced motor to his favorite gaming chair to make his whole body vibrate instead.

To do that he opened up the controller and found the wires going to the unbalanced motor. There he added a small relay, to be activated whenever the motor was energized. Wires from that relay go to a female connector mounted in the side of the controller, keeping the controller small and lightweight.

All that was left was to power the motor and turn it on when needed. For that he wired up a bigger relay, with the relay’s coil wired to a male connector to plug into the PS-3 controller. Now when the PS-3 wants to vibrate, that relay is energized. All that was left was to wire the relay’s normally open switch, the motor and a power cord in series, plug it into the wall socket, and he was ready to shake.