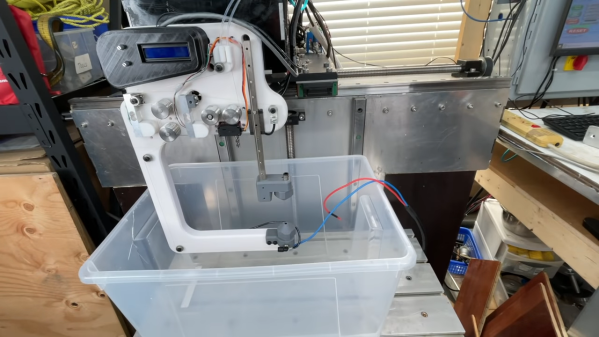 When you see something made from metal that seems like it would be impossible to manufacture, chances are good it was made with some variety of electrical discharge machining. EDM is the method of choice for hard-to-machine metals, high aspect ratio hole drilling, and precise surface finishes that let mating parts slip together with almost zero clearance. The trouble is, EDM is a bit fussy, and as a result hasn’t made many inroads to the home shop.

[Action BOX] aims to change that with a DIY wire EDM machine. In wire EDM, a fine brass wire is used as an electrode to slowly erode metal in a dielectric bath. The wire is consumable, and has to constantly move from a supply spool through the workpiece and onto a takeup spool. Most of the build shown in the video below is concerned with the wire-handling mechanism, which is prototyped from 3D-printed parts and a heck of a lot of rollers and bearings. Maintaining the proper tension on the wire is critical, so a servo-controlled brake is fitted to the drivetrain, which itself is powered by a closed-loop stepper. Tension is measured by a pair of strain gauges and Arduinos, which control the position of the shaft brake servo and the speed of the motor on the takeup spool.

Unfortunately, in testing this setup proved to live up to EDM’s fussy reputation. The brass wire kept breaking as soon as cutting started, and [Action BOX] never made any actual cuts. There’s certainly promise, though, and we’re looking forward to developments. For more on EDM theory, check out [Ben Krasnow]’s look at EDM hole-drilling.

END_OF_DOCUMENT_TOKEN_TO_BE_REPLACED 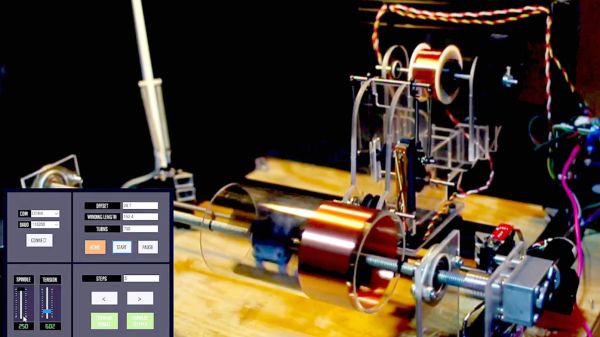 What is it about coil winding automation projects that’s just so captivating? Maybe it’s knowing what a labor saver they can be once you’ve got a few manually wound coils under your belt. Or perhaps it’s just the generally satisfying nature of any machine that does an exacting task smoothly and precisely. Whatever it is, this automatic Tesla coil winder has it in abundance.

According to [aa-epilectrik]’s account, the back story of this build is that while musical Tesla coils are a big part of the performance of musical group ArcAttack, they’re also cool enough in their own right to offer DIY kits for sale. This rig takes on the job of producing the coils, which at least takes some of the drudgery out of the build. There’s no build log, but there are enough details on reddit and Instagram to work out the basics. The main spindle is driven by a gearmotor while the winding carriage translates along a linear slide thanks to a stepper-driven lead screw. The spool holding the fine magnet wire needs to hold proper tension to prevent tangling; this is achieved through by applying some torque to the spool with a small DC motor.

There are some great design elements in this one, not least being the way tension is controlled by measuring the movement of an idler pulley using a linear pot. At top speed, the machine looks like it complete a coil in just about three minutes, which seems pretty reasonable with such neat results. Another interesting point: ArcAttack numbers [Anouk Wipprecht], whom we’ve featured a couple of times on these pages, among its collaborators. Small world.

END_OF_DOCUMENT_TOKEN_TO_BE_REPLACED 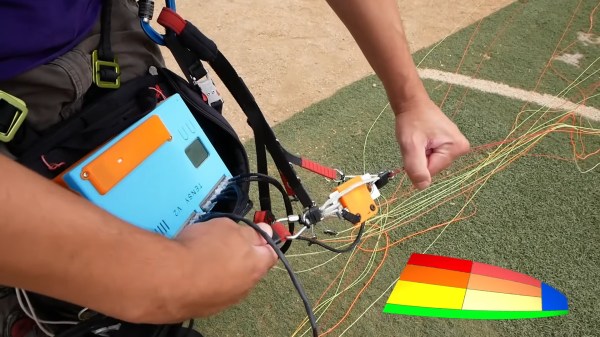 No matter what they’re flying, good pilots have a “feel” for their aircraft. They know instantly when something is wrong, whether by hearing a strange sound or a feeling a telltale vibration. Developing this sixth sense is sometimes critical to the goal of keeping the number of takeoff equal to the number of landings.

The same thing goes for non-traditional aircraft, like paragliders, where the penalty for failure is just as high. Staying out of trouble aloft is the idea behind this paraglider line tension monitor designed by pilot [Andre Bandarra]. Paragliders, along with their powered cousins paramotors, look somewhat like parachutes but are actually best described as an inflatable wing. The wing maintains its shape by being pressurized by air coming through openings in the leading edge. If the pilot doesn’t maintain the correct angle of attack, the wing can depressurize and collapse, with sometimes dire results.

Luckily, most pilots eventually develop a feel for collapse, sensed through changes in the tension of the lines connecting the wing to his or her harness. [Andre]’s “Tensy” — with the obligatory “McTenseface” surname — that’s featured in the video below uses an array of strain gauges to watch to the telltale release of tension in the lines for the leading edge of the wing, sounding an audible alarm. As a bonus, Tensy captures line tension data from across the wing, which can be used to monitor the performance of both the aircraft and the pilot.

There are a lot of great design elements here, but for our money, we found the lightweight homebrew strain gauges to be the real gem of this design. This isn’t the first time [Andre] has flown onto these pages, either — his giant RC paraglider was a big hit back in January.

END_OF_DOCUMENT_TOKEN_TO_BE_REPLACED 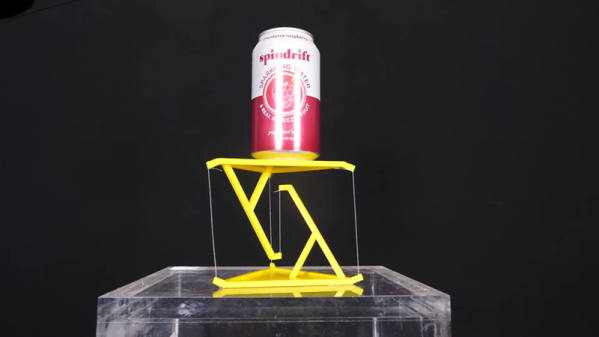 If you’ve never heard of a tensegrity structure, you should stop now and watch the video below. In it, [The Action Lab] shows a 3D printed table that is held up only with strings. We didn’t say suspended by strings but held up. Or so it appears. The model is from Thingiverse, but it is one of those things you have to see to believe.

The basic idea is pretty simple. Strings have a lot of tensile strength but collapse under the slightest compressive force. The arrangement of strings puts the force on the center string which is essentially hanging — the force is pulling the string down. The other three strings aren’t just for show, though, they keep the structure from tipping over in any one direction.

There are actually real-life examples of these kinds of structures. The video shows the Skylon at the Festival of Britain as one example and an Australian bridge. The video also makes the point that the human body uses tensegrity, since tendons are very similar to the strings in the model.

This would be a great experiment for a homeschooler or even kids cooped up in quarantine. The print itself doesn’t look very challenging, although the assembly might be a bit tricky.

This isn’t the first structure like this that we’ve seen. If the talk about tendons makes you think this might be useful in robotics, you’d be correct.

END_OF_DOCUMENT_TOKEN_TO_BE_REPLACED 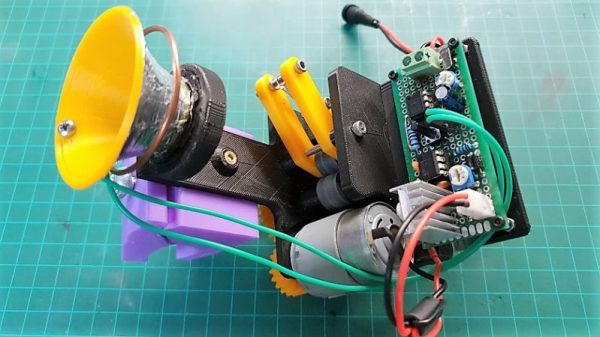 Buying 3D-printer filament is little like eating potato chips: you can’t stop at just one. You start with basic black PLA, then you need a particular color for a special project, then you start experimenting with different plastics, and before you know it, you’ve got dozens of reels lined up. Trouble is, unless you move the in-use reel right over the printer, the filament can get a bit unruly as the printer sucks it up. What to do?

How about building an active strain relief system for your filament collection? That what [Daniel Harari] chose to do, and we have to say that it looks pretty slick. The idea is to keep the filament slack before it enters the printer’s extruder no matter where the reel is positioned relative to the printer. The active bit is a little like a low-force extruder, using a couple of pinch rollers from an old 2D-printer to pay out filament when needed. A clever sensor, consisting of a 3D-printed funnel and a copper wire contact loop, detects when the printer has taken up all the slack in the filament and triggers a payout from the feeder. In a nice touch, the feeder motor is controlled by a couple of 555s rather than a microcontroller. The short clip below shows the feeder being triggered and paying out a little more slack.

In the final analysis, this is just another in a long series of filament management projects, from dry-boxes to filament meters to end-of-spool alarms. It may be overkill, but [Daniel] put a lot of thought into it, which we always appreciate.

END_OF_DOCUMENT_TOKEN_TO_BE_REPLACED

[Robby Cuthbert,] an artist and designer based out of Fort Collins, Colorado is creating stable cable tables that are simultaneously a feat of engineering and a work of art.

[Cuthbert’s] tables are held together by 1/16″ stainless steel cables that exert oppositional tensions that result in a structurally stable and visually appealing coffee table. In his video, [Cuthbert] leads us through his process for creating his tables, step by step. [Cuthbert] starts by cutting out bamboo legs on his CNC mill. He then drills holes in each leg for cables and mounts each leg on his custom table jig. Then, he attaches the stainless steel cabling taking care to alternate tension direction. The cables are threaded through holes in the legs and affixed with copper crimps. After many cables, he has a mechanical structure that can support his weight that also looks fantastic. All in all, [Cuthbert’s] art is a wonderful example of the intersection of art and engineering.

If we’ve whet your appetite, fear not, we have featured many tension based art/engineering hacks before. You might be interested in these computer-designed portraits or, if the thought of knitting by hand gives you the heebie-jeebies, the Autograph, a string art printer might be more your style.

END_OF_DOCUMENT_TOKEN_TO_BE_REPLACED 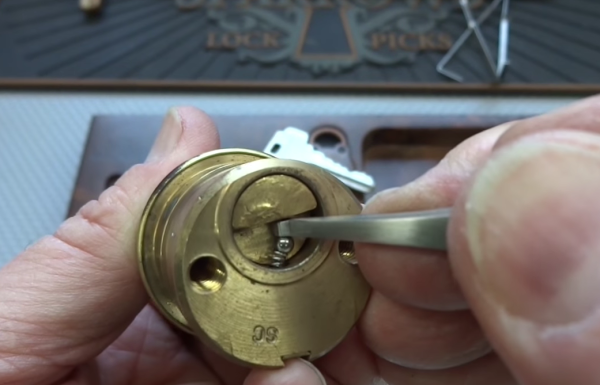 While it’s often thought of as a criminal activity, there’s actually a vibrant hobby community surrounding the art of lock picking. In the same way that white hat hackers try to break into information systems to learn the ways that they can be made stronger, so do those in the locksport arena try to assess the weaknesses of various locks. For the amateur, it can be exciting (and a little unnerving) to experience the ease at which a deadbolt can be picked, and if your concern is great enough, you can go a little farther and modify your locks to make them harder to defeat.

The lock in question was sent to [bosnianbill] by [Rallock67] with a device that [Rallock67] had installed using common tools. Known as a Murphy Ball, a larger-than-normal spring was inserted into one of the pins and held in place by a ball bearing. This makes the lock almost completely immune to bumping, and also made it much more difficult for [bosnianbill], an accomplished and skilled locksmith, to pick the lock due to the amount of force the spring exerted on the cylinder. The surprising thing here was that this modification seems to be relatively easy to do by tapping out some threads and inserting a set screw to hold in the spring.

Locksport and lockpicking are a great hobby to get into. Most people start out picking small padlocks due to their simplicity and ease. It’s even possible to pick some locks with a set of bobby pins. And, if you really want to see how easy it is to defeat some locks and/or how much good the TSA does for your overall security, you’ll want to take a look at this, too.

Thanks to [TheFinn] for the tip!