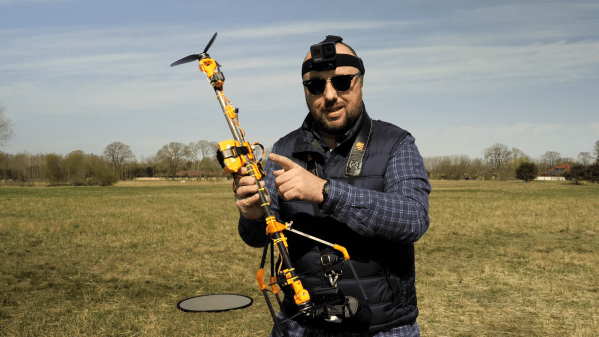 When it comes to hobby rotorcraft, it almost seems like the more rotors, the better. Quadcopters, hexacopters, and octocopters we’ve seen, and there’s probably a dodecacopter buzzing around out there somewhere. But what about going the other way? What about a rotorcraft with the minimum complement of rotors?

And thus we have this unique “flying stick” bicopter.  [Paweł Spychalski]’s creation reminds us a little of a miniature version of the “Flying Bedstead” that NASA used to train the Apollo LM pilots to touch down on the Moon, and which [Neil Armstrong] famously ejected from after getting the craft into some of the attitudes this little machine found itself in. The bicopter is unique thanks to its fuselage of carbon fiber tube, about a meter in length, each end of which holds a rotor. The rotors rotate counter to each other for torque control, and each is mounted to a servo-controlled gimbal for thrust vectoring. The control electronics and battery are strategically mounted on the tube to place the center of gravity just about equidistant between the rotors.

But is it flyable? Yes, but just barely. The video below shows that it certainly gets off the ground, but does a lot of bouncing as it tries to find a stable attitude. [Paweł] seems to think that the gimballing servos aren’t fast enough to make the thrust-vectoring adjustments needed to keep a stick flying, and we’d have to agree.

This isn’t [Paweł]’s first foray into bicopters; he earned “Fail of the Week” honors back in 2018 for his coaxial dualcopter. The flying stick seems to do much better in general, and kudos to him for even managing to get it off the ground.

END_OF_DOCUMENT_TOKEN_TO_BE_REPLACED 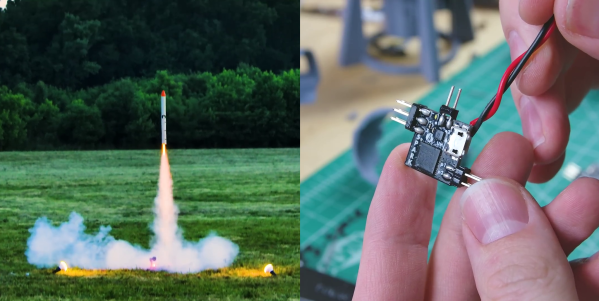 Flying a thrust-vectoring rocket can be a challenge, and even more so if you stack multiple stages and a minimalist flight computer on top of it all. But [Joe Barnard] is not one to shy away from such a challenge, so he built a three stage actively guided rocket named Shreeek.

[Joe] is well known for his thrust-vectoring rockets, some of which have came within a hair’s breadth of making a perfect powered landing. Previous rockets have used larger, more complex flight computers, but for this round, he wanted to go as small and minimalist as possible. Each stage of the rocket has its own tiny 16 x 17 mm flight computer and battery. The main components are a SAM21 microcontroller running Arduino firmware, an IMU for altitude and orientation sensing, and a FET to trigger the rocket motor igniter. It also has servo outputs for thrust vector control (TVC), and motor control output for the reaction wheel on the third stage for roll control. To keep it simple he omitted a way to log flight data, a decision he later regretted. Shreeek did not have a dedicated recovery system on any of the stages, instead relying on its light weight and high drag to land intact

None of the four launch attempts went as planned, with only the first two stages functioning correctly in the test with the best results. Thanks to the lack of recorded flight data, [Joe] had to rely on video footage alone to diagnose the problems after each launch. Even so, his experience diagnosing problems certainly proved its worth, with definitive improvements. However, we suspect that all his future flight computers will have data logging features included.

END_OF_DOCUMENT_TOKEN_TO_BE_REPLACED 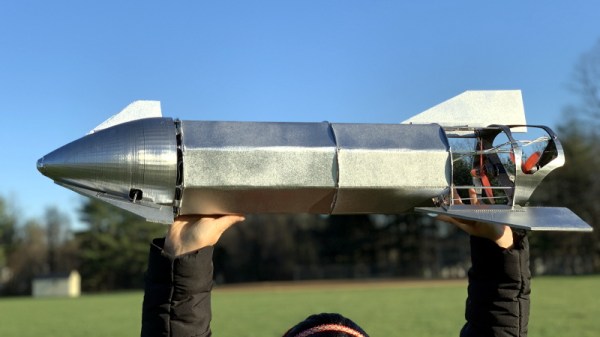 There’s a good chance you already saw SpaceX’s towering Starship prototype make its impressive twelve kilometer test flight. While the attempt ended with a spectacular fireball, it was still a phenomenal success as it demonstrated a number of concepts that to this point had never been attempted in the real world. Most importantly, the “Belly Flop” maneuver which sees the 50 meter (160 foot) long rocket transition from vertical flight to a horizontal semi-glide using electrically actuated flight surfaces.

Finding himself inspired by this futuristic spacecraft, [Nicholas Rehm] has designed his own radio controlled Starship that’s capable of all the same aerobatic tricks as the real-thing. It swaps the rocket engines for a pair of electric brushless motors, but otherwise, it’s a fairly accurate recreation of SpaceX’s current test program vehicle. As you can see in the video after the break, it’s even able to stick the landing. Well, sometimes anyway. 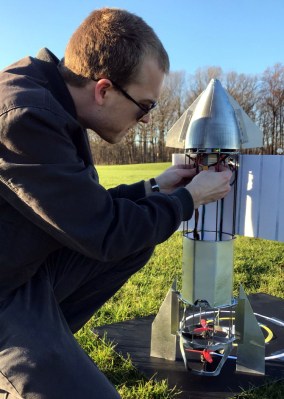 Just like the real Starship, vectored thrust is used to both stabilize the vehicle during vertical ascent and help transition it into and out of horizontal flight. Of course, there are no rocket nozzles to slew around, so [Nicholas] is using servo-controlled vanes in the bottom of the rocket to divert the airflow from the motors. Servos are also used to control the external control surfaces, which provide stability and a bit of control authority as the vehicle is falling.

As an interesting aside, Internet sleuths looking through pictures of the Starship’s wreckage have noted that SpaceX appears to be actuating the flaps with gearboxes driven by Tesla motors. The vehicle is reportedly using Tesla battery packs as well. So while moving the control surfaces on model aircraft with battery-powered servos might historically have been a compromise to minimize internal complexity, here it’s actually quite close to the real thing.

Unfortunately, the RC Starship made a hard landing of its own on a recent test flight, so [Nicholas] currently has to rebuild the craft before he can continue with further development. We’re confident he’ll get it back in the air, though it will be interesting to see whether or not he’s flying before SpaceX fires off their next prototype.

END_OF_DOCUMENT_TOKEN_TO_BE_REPLACED 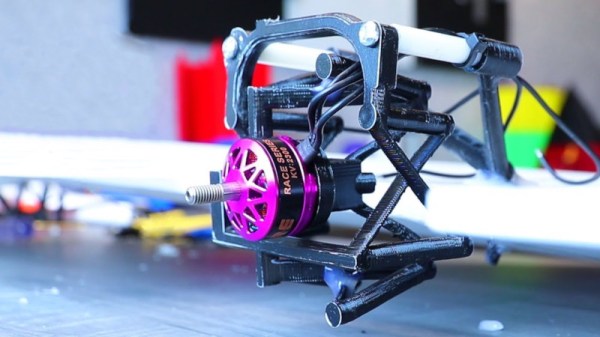 Thrust vectoring is one way to control aerial vehicles. It’s become more popular as technology advances, finding applications on fifth-generation fighter aircraft, as well as long being used in space programmes the world over.[RCLifeOn] decided to try and bring the technology to a prop-powered RC aircraft, in an unconventional way.

After attending a lecture on compliant mechanisms and their potential use in space vehicles for thrust vectoring control, [RCLifeOn] decided to try applying the concept himself. His test mechanism is a fixed-wing with a single-piece motor mount that has enough flex in the right places to allow the motor (and propeller) to be moved in two axes, achieving thrust vectoring control.

After printing a compliant motor mount in a variety of materials, one was selected for having the right balance of strength and flexibility. The vectoring mechanism was fitted to a basic flying wing RC aircraft, and taken to the field for testing. Unfortunately, success was not the order of the day. While the mechanism was able to flex successfully and vector the motor in bench testing, it was unable to hold up to the stresses of powered flight. The compliant mechanism failed and the plane nosedived to the ground.

[RCLifeOn] suspects that the basic concept is a difficult proposition to engineer properly, as adding strength would tend to add weight which would make flight more difficult. Regardless, we’d love to see further development of the idea. It’s not the first time we’ve seen his 3D-printed flight experiments, either. Video after the break.

END_OF_DOCUMENT_TOKEN_TO_BE_REPLACED 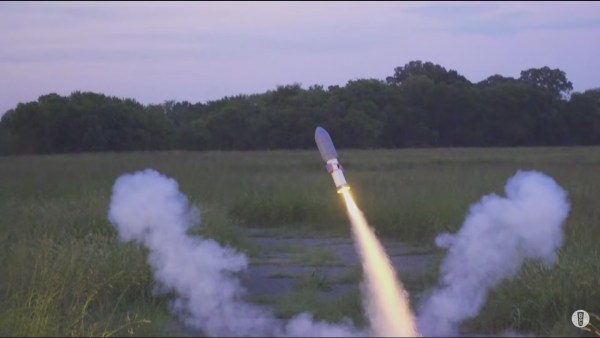 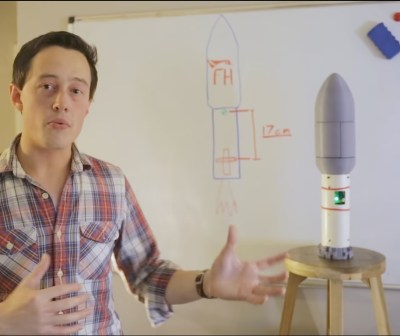 END_OF_DOCUMENT_TOKEN_TO_BE_REPLACED

Cornell University’s microcontroller class looks like a tremendous amount of fun. Not only do the students learn the nitty-gritty details of microcontroller programming, but the course culminates in a cool project. [Brian Ritchken] and [Jim Liu] made a thrust-vector controlled balloon blimp. They call this working?!?!

Three balloons provide just enough lift so that the blimp can climb or descend on motor power. Since the machine is symmetric, there’s no intrinsic idea of “forward” or “backward”. Instead, a ring of eight LEDs around the edge let you know which way the blimp thinks it’s pointing. Two controls on the remote rotate the pointing direction clockwise and counter-clockwise. The blimp does the math to figure out which motors to run faster or slower when you tell it to go forward or back.

The platform is stabilized by a feedback loop with an accelerometer on board, and seems capable of handling a fairly asymmetric weight distribution, as evidenced by their ballast dangling off the side — a climbing bag filled with ketchup packets that presumably weren’t just lifted from the dining halls.

It looks like [Brian] and [Jim] had a ton of fun building and flying this contraption. We’d love to see a distance-to-the-floor sensor added so that they could command it to hover at a given height, but that adds an extra level of complexity. They got this done in time and under budget, so kudos to them both. And in a world full of over-qualified quadcopters, it’s nice to see the humble blimp getting its time in the sun.

Yep, you heard right… this is yet another final project for a University course. Yesterday we saw a spinning POV globe, and the day before a voice-activated eye test. We want to see your final project too so please send in a link! 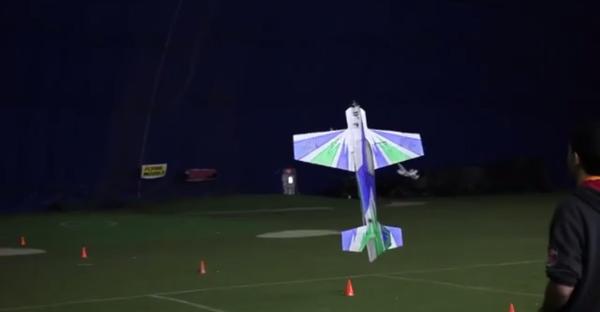 The RC plane shown above is hovering in that position. And that’s about the least impressive thing it can do. This is the power of Collective Pitch Thrust Vectoring… on a plane.

So what exactly is Collective Pitch Thrust Vectoring anyway? Put simply, it’s like strapping a helicopter rotor to the front of a plane. We think the basic mechanism behind this is called a Swashplate (as found on a helicopter rotor), which allows for thrust vectoring, meaning the propeller blades can actually change their pitch cyclically, while still spinning at high speeds! This is what allows helicopters to do crazy tricks like barrel rolls.

A normal RC plane can only increase or decrease thrust with the speed of the engine. But with this, the thrust can be changed cyclically as the blades spin allowing for thrust vectoring (advanced steering). Couple that with some huge control surfaces and wing stabilizers and that means some seriously crazy aerodynamic feats.

Watch the video after the break, it’s amazing.