With most of us utilizing at least two monitors these days in our day to day operations, six monitors, while an awesome thought, might seem a little too excessive. After all, do we really have space for multiple video cards?

AMD has a new setup in their testing lab that is running six Dell 30inch displays at 7680×3200 through a video card holding six DisplayPort connectors.

Maximum PC has the scoop on the setup, and they say that this single GPU will be coming out on AMD’s DirectX 11 capable chips. Details are slim with the amount of video RAM, speeds and cost not known at present.

Think of the possibilities! Trade shows are one thing, but how about a video wall at home for gaming and movies? How would you use the six monitors shown above? Be sure to leave your ideas in the comments.

We thought [Kristofer’s] Tech Tip about using figlet with scripts was kind of fun. It’s a throwback to the days of logging onto a BBS and being greeted by a vertically scrolling ASCII art image that had been meticulously hand crafted (although a lot of the coolest stuff was actually ANSI art). No hand crafting here, just feed (or pipe) your text to figlet and it outputs the message in ASCII style letters.

When we went to try install this in Ubuntu, the toilet package was suggested. This one’s worth checking out too. It works in much the same way as figlet but uses extended characters and has a lot more color and font settings:

Give these packages a try and make character art cool again! 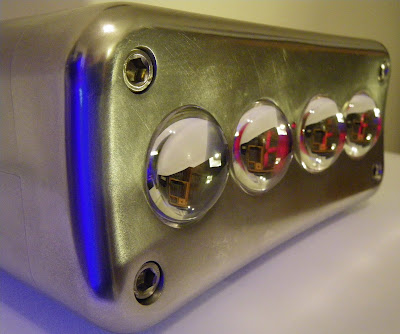 [Dennis] has created a well-documented and very beautiful clock in his latest project. This clock stands out from the other clock projects we have covered with its unique display. The seven segment LED displays mounted on a sled that moves them back and forth behind an array of fiber optic lenses, effectively taking the display out of focus at certain points. Currently, a Dorkboard controls the sled, moving it at random intervals. The case is machined and polished aluminium, the top buttons are ball bearings.

As cigar aficionados will tell you, cigars should be stored in climate controlled humidors to keep them in best condition for smoking. Most of the time a humidor is just a simple air-tight box with a hygrometer attached, which measures the relative humidity inside the box. Feeling as though he needed more control over the environment he kept his cigars in, [Justin] created the Tweetidor, a humidor that tweets its current temperature and humidity. Yes, you guessed it; the project is built around an Arduino. It’s a simple, useful project that is well documented and would be fun to recreate if you’re into cigars (and not tired of Twitter or Arduinos yet.) Combine this with the laser lighter and you’ve got a pretty nice setup.

Clocks made from blinking LEDs always make for fun projects. [Earthshine] built a clock that displays time abstractly using an 8×8 RGB LED matrix. The video embedded after the break illustrates how to read the time but here’s the gist of it: One LED is illuminated in the outside box of LEDs and moved in a clockwise motion to approximate seconds. Inside of this, there are four quadrants; upper left indicates hour-tens digit, upper right hour-ones, lower left minute-tens, and lower right minute-ones. This certainly makes for an interesting conversation piece!

There is no schematic and no code available but it’s really the concept that we’re interested in. If you must know, [Earthshine] bases this build around an Arduino. A DS1307 real time clock keeps the time, while four 74HC595 shift registers are utilized to control the three LED colors and the multiplexing.

END_OF_DOCUMENT_TOKEN_TO_BE_REPLACED

One man’s useless machine is another man’s treasure… or something. [Matt] shared a link to his MP3 gr3nade in the comments of our useless machines post. The project took a decomissioned hand grenade and shoehorned an MP3 player into it. His decision to locate the headphone jack where the safety pin goes is a nice touch.

This reminds us of the boss from a previous job who had a chrome plated hand grenade on his desk.  Now that was a useless object (and a useless boss). This project actually does something, but are you really going to ride around on the subway rockin’ out to the Bee Gees while holding a hand grenade?