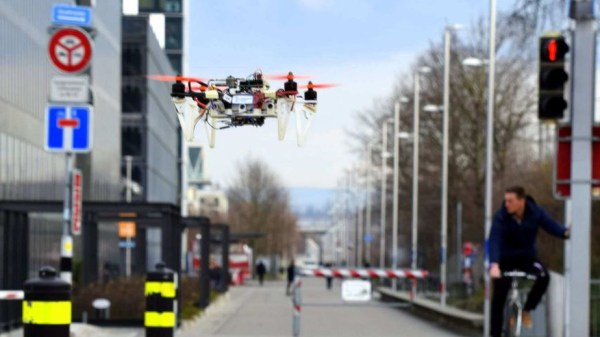 Increasingly these days drones are being used for urban surveillance, delivery, and examining architectural structures. To do this autonomously often involves using “map-localize-plan” techniques wherein first, the location is determined on a map using GPS, and then based on that, control commands are produced.

A neural network that does steering and collision prediction can compliment the map-localize-plan techniques. However, the neural network needs to be trained using video taken from actual flying drones. But generating that training video involves many hours of flying drones at street level putting vehicles and pedestrians at risk. To train their DroNet, Researchers from the University of Zurich and the Universidad Politecnica de Madrid have come up with safer sources for that video, video recorded from driving cars and bicycles.

For the drone steering predictions, they used over 70,000 images and corresponding steering angles from the publically available car driving data from Udacity’s Open Source Self-Driving project. For the collision predictions, they mounted a GoPro camera to the handlebars of a bicycle and drove around a city. Video recording began when the bicycle was distant from an object and stopped when very close to the object. In total, they collected 32,000 images.

To use the trained network, images from the drone’s forward-facing camera were fed into the network and the output was a steering angle and a probability of collision, which was turned into a velocity. The drone remained at a constant height above ground, though it did work well from 1.5 meters to 5 meters up. It successfully navigated road lanes and avoided moving pedestrians and bicycles. Intersections did confuse it though, likely due to the open spaces messing with the collision predictions. But we think that shouldn’t be a problem when paired with map-localize-plan techniques as a direction to move through the intersection would be chosen for it using the location on the map.

As you can see in the video below, it not only does a decent job of flying down lanes but it also flies well in a parking garage and a hallway, even though it wasn’t trained for either of these.

END_OF_DOCUMENT_TOKEN_TO_BE_REPLACED

20 students of the Eindhoven University of Technology (TU/e) in the Netherlands share one vision of the future: the fully domesticated drone pet – a flying friend that helps you whenever you need it and in general, is very, very cute. Their drone “Blue Jay” is packed with sensors, has a strong claw for grabbing and carrying cargo, navigates autonomously indoors, and interacts with humans at eye level.

END_OF_DOCUMENT_TOKEN_TO_BE_REPLACED

[Geir] has created a pretty neat device, it’s actually his second version of an autonomous boat that maps the depths of lakes and ponds. He calls it the Sea Rendering. The project is pretty serious as the hull was specially made of fiberglass. The propulsion is a simple DC motor and the rudder is powered by an RC servo. A light and flag adorn the top deck making the small craft visible to other larger boats that may be passing by. Seven batteries are responsible for all of the power requirements.

The craft’s course is pre-programmed in Mission Planner and uses ArduPilot loaded on an Arduino to steer to the defined way points. An onboard GPS module determines the position of the boat while a transducer measures the depth of the water. Both position and depth values are then saved to an SD card. Those values can later be imported into a software called Dr Depth that generates a topographic map of the water-covered floor.

[Geir] has sent this bad boy out on an 18 km journey passing through 337 way points. That’s pretty impressive! He estimates that the expected run time is 24 hours at a top speed of 3 km/h, meaning it could potentially travel 72 km on a single charge while taking 700 depth measurements during the voyage.

END_OF_DOCUMENT_TOKEN_TO_BE_REPLACED