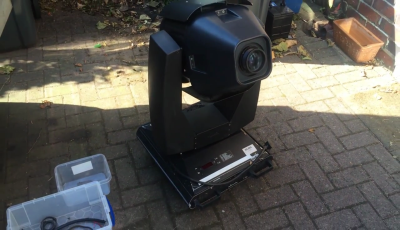 END_OF_DOCUMENT_TOKEN_TO_BE_REPLACED

Later, in 1973, Westworld become the very first feature film to feature CGI. The film was a science fiction western-thriller about amusement park robots that become evil. The studio wanted footage of the robot’s “computer vision” but they would need an expert to get the job done right. They ultimately hired [John Whitney’s] son, [John Whitney Jr] to lead the project. The process first required color separating each frame of the 70mm film because [John Jr] did not have a color scanner. He then used a computer to digitally modify each image to create what we would now recognize as a “pixelated” effect. The computer processing took approximately eight hours for every ten seconds of footage. END_OF_DOCUMENT_TOKEN_TO_BE_REPLACED Study the image above closely. You’ll notice that physically it is an impossible object, yet this is a screenshot of full-motion video. The clip after the break shows a gentleman pouring water into the waterfall where the wheel is located. The liquid flows in a direction that appears to be uphill, then falls onto the waterwheel where it was originally poured. Ladies and Gentleman, we have the solution to the world’s energy crisis. Nope, we have a hoax and the real question is how was it done?

[David Goldman] has come up with quite the explanation. He watched the video very closely and the put together a three-dimensional diagram showing how he would build the apparatus. If you saw the movie Inception (we highly recommend you do) you will remember the infinite stair puzzle that is exposed as an optical illusion. [David’s] proposed method for debunking this hoax uses a similar build that comes in four different, precisely placed elements.

We’ve got to hand it to him. That’s a brilliant theory! Of course the first commenter on the post linked above calls this out as CGI and we’re inclined to go with that answer but that’s much less fun.